Please ensure Javascript is enabled for purposes of website accessibility
Log In Help Join The Motley Fool
Free Article Join Over 1 Million Premium Members And Get More In-Depth Stock Guidance and Research
By Keith Speights - Mar 12, 2020 at 7:03AM

The clinical-stage biotech had a busy fourth quarter and even busier start to 2020.

This year has been a whirlwind so far for Novavax (NVAX 11.12%). Shares of the biotech have skyrocketed, including a big jump on Tuesday after the Coalition for Epidemic Preparedness (CEPI) awarded Novavax a $4 million grant to develop a vaccine for coronavirus disease COVID-19.

Novavax announced its 2019 fourth-quarter and full-year results after the market closed on Wednesday. The company had some bad news, some good news, and what could be great news. 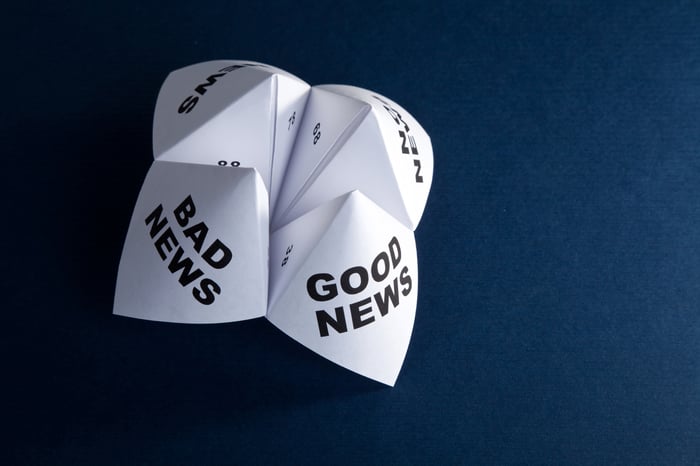 Let's start with the bad news. Novavax yet again lost a boatload of money in Q4 with the company recording a net loss of $31.8 million, or $1.13 per share. This result was a little worse than the average analysts' estimate of a Q4 net loss of $1.06 per share.

The other piece of bad news related to Novavax's cash position. The biotech ended 2019 with cash, cash equivalents, marketable securities, and restricted cash totaling $82.2 million. This amount by itself is only enough to fund operations for a couple of quarters.

Now for some good news. First, Novavax's cash position now is much better than it was at the end of December. The company raised additional net proceeds of $156 million in early 2020 through at-the-market (ATM) stock offerings. This should fund operations at least into the first half of 2021.

Novavax also reported $8.8 million in the fourth quarter, up from $6.1 million in the prior-year period and a lot better than the consensus Wall Street revenue estimate of $2.06 million. This big jump in revenue was driven by a $7.5 million revenue boost from the company's recovery of additional costs related to the close of its contract with the Department of Health and Human Services' (HHS) Biomedical Advanced Research and Development Authority (BARDA).

In addition, Novavax announced earlier on Wednesday that it inked a licensing deal with Serum Institute of India (SII) for its Matrix-M vaccine adjuvant. SII plans to use Matrix-M in its experimental malaria vaccine. Results from a phase 2b study of the vaccine are expected in the second quarter of this year.

Novavax also discussed what could turn out to be great news for the company. The only hitch was this news wasn't really new information for investors.

CEO Stanley Erck said that his company is on schedule to report top-line results from its late-stage study evaluating NanoFlu in immunizing older adults against influenza by the end of March. He noted that Novavax plans to file for FDA approval of the vaccine if the results from the study are positive.

As mentioned earlier, Novavax received initial funding of $4 million from CEPI to support development of a COVID-19 vaccine. Novavax is reviewing several nanoparticle vaccine candidates in preclinical testing to choose the best candidate to advance to testing in humans. The company expects to begin a phase 1 study in May or June of this year.

It's possible that Novavax will get additional financial assistance to conduct this phase 1 study. The company said that it's "having ongoing discussions on additional funding" with CEPI to help cover the costs of the COVID-19 vaccine testing.

Expect significant volatility for the biotech stock over the next several months. There will be anxious anticipation for Novavax's results from its late-stage study of NanoFlu. Any developments on the COVID-19 front, including progress or setbacks for key rivals racing to develop a vaccine for the novel coronavirus disease, could cause Novavax's shares to soar or sink. The whirlwind for Novavax in 2020 isn't likely to die down anytime soon.