Why investors shouldn't be concerned about Nike's 11% decline.

Shares of NIKE, Inc. (NKE -1.02%), the largest athletic footwear and apparel brand in the world, dropped more than 11% Thursday as broader markets plunged and investors grappled with the uncertainty behind the NBA's suspended season.

The market free fall happened despite The Federal Reserve announcing it would pump more than $1.5 trillion of temporary liquidity into the markets to help ease fears of a potential economic impact from the COVID-19 outbreak. But for Nike investors, there were more specific concerns. 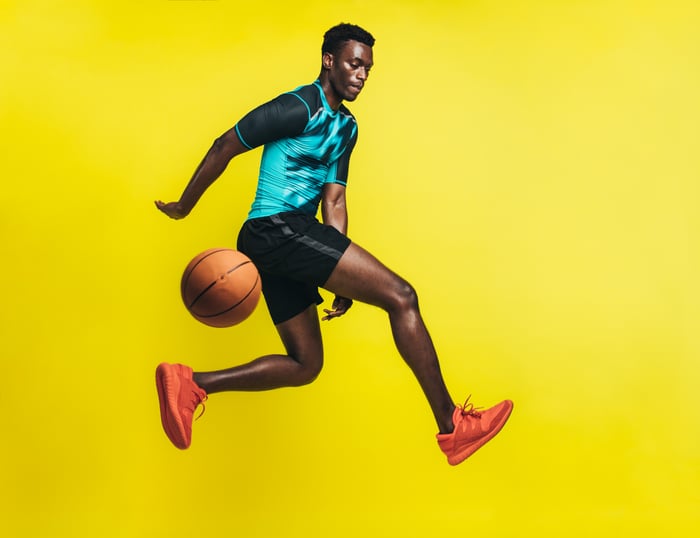 Wednesday and Thursday brought more specific news and added uncertainty when many NCAA basketball conference tournaments and the NCAA March Madness tournament were canceled. Even more worrisome, perhaps, was the NBA announcing that it was suspending the regular season, during which period Nike heavily advertises and promotes its footwear. All of those developments are in addition to the simple fact that China is a massive market for Nike products, and the less people are able to move, gather, and purchase, the larger the hit on sales will be.

Further, if there are any supply chain disruptions, it could hinder Nike's global inventory of products and lower its total sales potential. Remember, in fiscal 2019, Nike factories in Vietnam, China, and Indonesia manufactured roughly 49%, 23%, and 21%, respectively, of Nike brand footwear. That's significant supply chain and manufacturing exposure in Asia.

Breathe. Yes, that sounded like a pile of bad news and seemingly endless amounts of uncertainty, but the truth for investors is that Nike is an iconic and massive company that will have little trouble getting through COVID-19 and the disruptions it brings to the apparel industry. History has taught investors that markets will eventually rebound, whether the panic selling was from SARS, MERS, terrorist attacks, or financial problems. That likely recovery is why long-term investors can take market volatility with a grain of salt.

Nike can make a strong case that it will remain the leader of athletic apparel based on its massive scale and iconic brand images over the next decade or longer, which will only add to its impressive pricing power and profitability. COVID-19 shouldn't have any long-term impact on Nike.