The stock has had a wild ride in 2020, but its plunges are, arguably, down to broad market fear, rather than having anything to do with the company itself.

Shares in lawn, garden care, and hydroponics products company Scotts Miracle-Gro (SMG -1.64%) sank 13.6% in February, according to data provided by S&P Global Market Intelligence. That was a sharp reversal for the stock after its 16% rise in January, to cap it all off the stock is up 11% in March as of Monday morning. 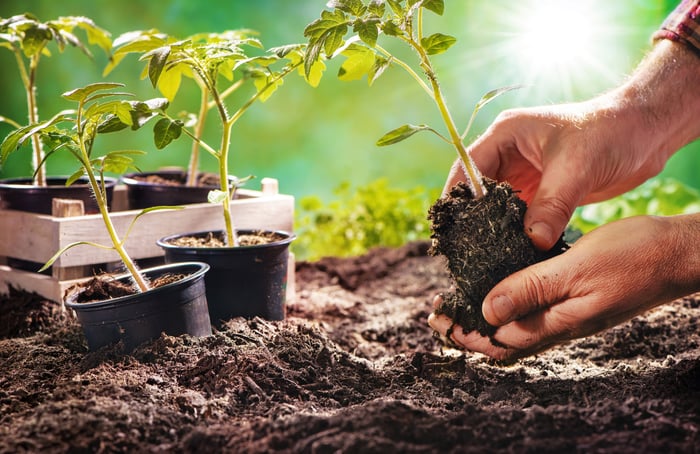 The stock's wild swings are being driven by a couple of factors. On the positive side, the company's first-quarter earnings -- released toward the end of January -- were well received by the market. Its overall sales were up a whopping 23% on the back of a 41% increase in sales from its Hawthorne Gardening Company segment. For reference, Hawthorne is a provider of nutrients, lighting and other products used in indoor gardening and hydroponics -- making it a cannabis stock.

"The engine of Hawthorne business is the United States' hydroponics and indoor growing businesses, which was up 66%," said CEO James Hagedorn when discussing the company's growth in the first quarter.

On the negative side, the share price plunge at the end of February closely tracked the broader market's swoon as it became clearer that the COVID-19 outbreak was going to take a real toll on the economy.

Scotts stock price has recovered somewhat in March with a 1.6% rise in the month at the time of writing, compared to a 5.4% drop in the S & P 500 suggesting the market may well be willing to focus on the company's underlying fundamentals rather than mark it down in line with the market. That said, it's only a few days trading so it's probably not a good idea to conclude too much from it.

There are certainly companies that are going to take a significant hit -- at least in the near term -- from the coronavirus outbreak, but Scotts is arguably not one of them.

For example, the aviation and entertainment sectors are likely to suffer more due to constraints on travel and people's decisions to avoid events that bring them into contact with large crowds. The industrial sector faces factory shutdowns and slowdowns due to supply chain issues, as well as reductions in end demand in China and elsewhere in Asia. However, a company like Scotts is relatively unexposed to those headwinds, and its recent results confirm that the company has excellent sales momentum.

As is natural for a company in the gardening and hydroponics sector, Scotts' sales are highly seasonal, and its first quarter is traditionally its weakest of the year -- accounting for only 11.3% of 12-month rolling sales. As such, the next two quarters -- which produced a combined 73% of 12-month rolling sales -- will define the company's 2020. Provided the COVID-19 epidemic doesn't severely impact global growth prospects, investors have cause to be optimistic about Scotts.