Please ensure Javascript is enabled for purposes of website accessibility
Log In Help Join The Motley Fool
Free Article Join Over 1 Million Premium Members And Get More In-Depth Stock Guidance and Research
By Keith Speights - Mar 13, 2020 at 8:02AM

Here are three solid reasons to keep your eyes on this high-flying biotech stock.

COVID-19 is now officially a pandemic. Italy has basically locked down the entire country. The U.S. is suspending most travel from Europe. The NBA suspended the rest of its season. So did the NHL. Major League Baseball is delaying the start of its season. And, oh yes, the stock market crashed, sending stocks plunging.

But not every stock is performing dismally. Shares of Inovio Pharmaceuticals (INO -3.48%) have soared nearly 170% higher so far this year based on the promise of the biotech's coronavirus program. Here are three reasons why Inovio remains a top coronavirus stock to watch. 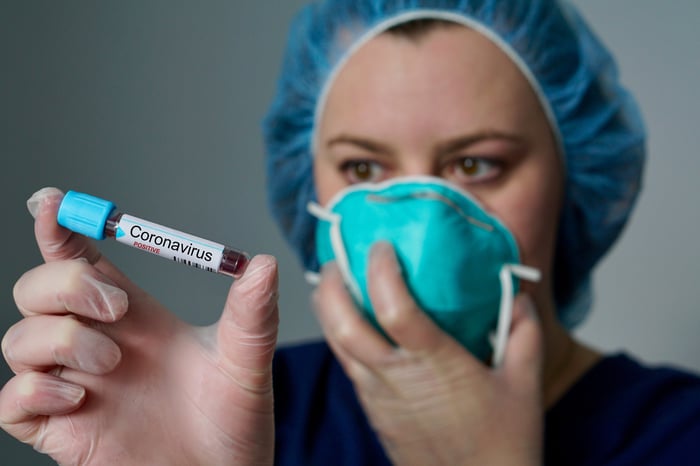 Inovio might seem tiny compared to some of the huge drugmakers that are scrambling to develop a vaccine for COVID-19. However, the company's INO-4800 is in the thick of the COVID-19 vaccine race. And giants can be beaten.

Don't think that Inovio is coming to battle unprepared. The small biotech certainly isn't new to vaccine development. Neither is it a newcomer to tackling coronaviruses. As CEO Joseph Kim pointed out last week in discussing Inovio's COVID-19 vaccine development timeline, Inovio is "the only company with a phase 2 vaccine for a related coronavirus that causes Middle East Respiratory Syndrome (MERS)."

U.S. clinical trials evaluating INO-4800 should begin in April. Clinical studies in China and South Korea are expected to start up soon afterward. This schedule puts Inovio neck-and-neck with Moderna in advancing an experimental COVID-19 vaccine to clinical testing in humans and ahead of other rivals.

2. Inovio is picking up significant funding

Inovio doesn't have deep pockets to fund its coronavirus vaccine program. But it's getting help from organizations with plenty of money.

On Thursday, Inovio announced the Bill & Melinda Gates Foundation had awarded a $5 million grant to speed up the testing of its Cellectra 3PSP device for intradermal delivery of its COVID-19 vaccine. This grant will also help the company scale up the production of the special device, which will be needed to meet the goal of producing 1 million doses of INO-4800 by the end of 2020.

3. It has other major pipeline news on the way

Inovio announced encouraging results in November 2019 from a phase 2 study of INO-5401 in treating glioblastoma multiforme (GBM). The biotech expects to report 12-month overall survival data from the study in the second quarter.

Investing in biotech stocks isn't for the faint of heart, though, especially clinical-stage biotechs like Inovio. For most investors, Inovio is a stock to watch, rather than buy, right now. It's easy to get caught up in the hype about the prospects for Inovio's COVID-19 vaccine and other experimental drugs. But the risks are significant that some or even all of these candidates could flop in clinical testing.