Please ensure Javascript is enabled for purposes of website accessibility
Log In Help Join The Motley Fool
Free Article Join Over 1 Million Premium Members And Get More In-Depth Stock Guidance and Research
By Will Healy - Mar 14, 2020 at 3:58PM

This matchup includes growth potential and a seemingly secure dividend.

Though Spotify (SPOT -1.08%) and AT&T (T -1.31%) are profoundly different companies, their businesses somewhat intersect. Spotify offers a music and podcasting service, while AT&T is a content provider in its own right. However, they differ in that wireless communication is AT&T's main driver.

For this reason, they also differ significantly from an investor's perspective. Spotify is a relatively young company with a market cap of over $26 billion as of this writing and tremendous growth potential. AT&T's market cap of over $257 billion is supported by a massive communications infrastructure that the company built and rebuilt over the decades to accommodate ever-changing, improving technologies. It typically relies on a low-growth but reliable customer base that should soon be bolstered by a 5G wireless infrastructure. Hence, when choosing between Spotify and AT&T, investors have to choose between growth and stability.

The state of Spotify

Spotify stock has held up well amid intense pressure. At the time of this writing, it trades at about $142 per share, well below the opening price of $165.90 per share for its April 2018 IPO. 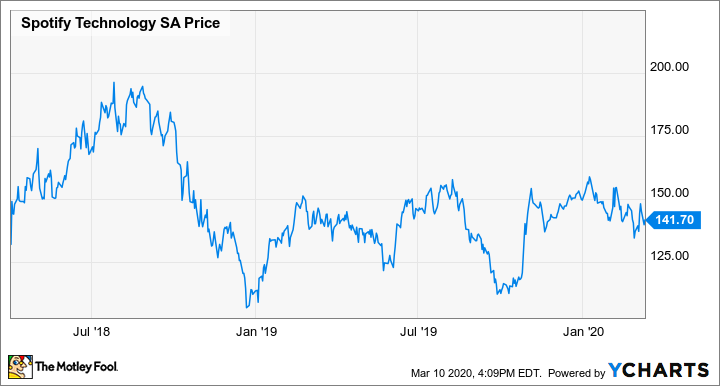 While Spotify is available on iOS and Android, it faces a significant disadvantage in that it lacks a direct tie to an ecosystem. Spotify has 124 million premium subscribers. This compares to the 60 million subscribers that Apple's Apple Music claimed as of last June.

Spotify investors have to worry that Apple might sideline Spotify within Apple's ecosystem. To address this challenge, Spotify partnered with Samsung. Under terms of the deal, Spotify became the "go-to music service provider" for all Samsung devices. 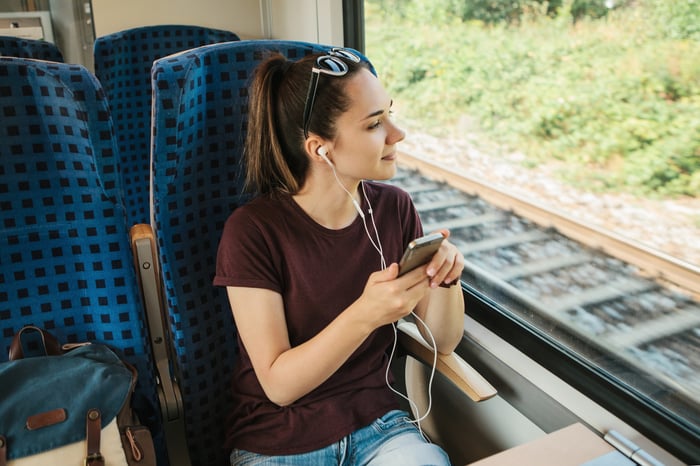 Also, to further stand out from Apple Music, Spotify needed a differentiator. Spotify addressed this issue by moving into podcasts. By owning proprietary content that consumers desire, Spotify has made itself essential to many of its users. This may help to explain why analysts forecast average profit growth of 118.5% per year over the next five years.

With that growth, analysts had expected Spotify to turn profitable in 2021. However, its anticipated move to profitability has suffered some setbacks. In its fourth-quarter earnings report, the company missed estimates by 0.78 euros ($0.88) per share and also fell short of revenue estimates. The company blamed "social charges," or payroll taxes associated with stock-based compensation, for the revenue and earnings misses. Moreover, the company guided toward a loss of between 150 million and 250 million euros for the current year.  Consequently, the previous consensus estimate for a profit in 2021 disappeared soon after.

Still, analysts expect revenue growth to remain above 20% per year through 2021. Additionally, they forecast that Spotify will turn profitable in 2022.

Time will tell how these forecasts will fare. The fact that Apple has not publicized an Apple Music subscriber number since the middle of last year could indicate that Spotify has gained. Whatever happens, Spotify looks poised to continue posting continued revenue and subscriber growth.

AT&T has also chosen to participate in the content game. However, instead of focusing on homegrown content, it bought the Time Warner content library and rebranded it WarnerMedia.

However, acquisitions such as Time Warner and the 2014 purchase of DIRECTV helped to leave AT&T with a massive debt load. The Time Warner merger also occurred as the buildout of 5G across the United States was costing AT&T billions per year.

This 5G investment could ultimately profit AT&T. The 5G network will give AT&T, along with Verizon and T-Mobile, a 5G oligopoly. It will also enable faster speeds and help to run applications in the artificial intelligence and virtual reality realms.

However, all of these costs left AT&T with long-term debt of $151.31 billion. Considering that AT&T holds equity of $201.93 billion (after subtracting liabilities from assets), that obligation places a significant burden on the company.

Furthermore, AT&T has struggled to grow profits for years amid intense competition in the wireless industry. Due to this slow growth, Wall Street expects the company to register average earnings growth of just 5.05% per year over the next five years.

All of this weighs on AT&T stock. It trades at a forward P/E ratio of only about 10. Moreover, the stock has not gained traction for decades. It trades at around $34.50 as of this writing, a price level it first reached in 1997! 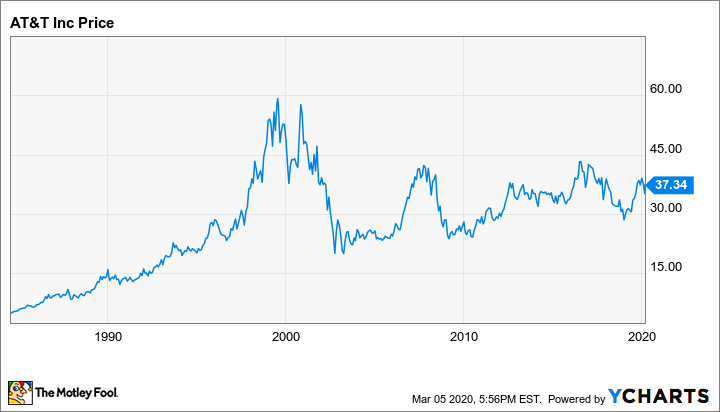 Furthermore, the company has become trapped by its dividend. Despite a yield of around 6%, AT&T has hiked its payout every year for the last 35 years. The dividend payout ratio of about 108.5% shows that the cost of the dividend exceeds the company's profit levels.

However, stocks like AT&T that hold Dividend Aristocrat status tend not to cut or hold steady their dividend and lose that status unless financial circumstances force their hand. Cutting the dividend, or merely suspending increases, could devastate a stock that has struggled to gain traction over the last several years as funds that hold Dividend Aristocrats would be compelled to sell AT&T. Other institutional sellers could follow. For this reason, AT&T will probably choose to maintain its streak of dividend increases despite the cost.

Even when considering AT&T's challenges, the telecom giant looks like the safer of the two tech stocks. This call comes down to infrastructure. Though the network places heavy costs on AT&T, it also gives the telecom giant control over its destiny. While investors should not expect rapid growth, the potential demand for 5G should make it a safe bet. Also, the desire to maintain Dividend Aristocrat status likely protects the dividend despite the high yield.

Conversely, Spotify holds no control over the platforms on which it operates. It faces constant pressure to produce enough compelling content to maintain and grow its base of premium subscribers. Moreover, if its alliance with Samsung ends, it would have no direct partnership with any major ecosystem.

While Spotify holds tremendous growth potential, the lack of control over its destiny means that potential comes with deep uncertainty. Despite AT&T's significant challenges, it remains the more likely of the two to generate positive long-term returns.