Please ensure Javascript is enabled for purposes of website accessibility
Log In Help Join The Motley Fool
Free Article Join Over 1 Million Premium Members And Get More In-Depth Stock Guidance and Research
By Jennifer Saibil - Mar 14, 2020 at 10:22AM

The company is seeing steady growth but is falling short in e-commerce sales. What can it do to improve digital?

Lowe's (LOW 1.42%) is one of the biggest retailers in the United States, and it's still outdone by its even larger rival, Home Depot. However, there seems to be plenty of business to go around, and Lowe's is working on taking more of it.

Despite increasing sales, though, Lowes.com has been stuck in the digital dinosaur age and watching the e-commerce boat pass by. Under the leadership of new CEO Marvin Ellison, the company is updating its web site and trying to boost its presence in the digital market. 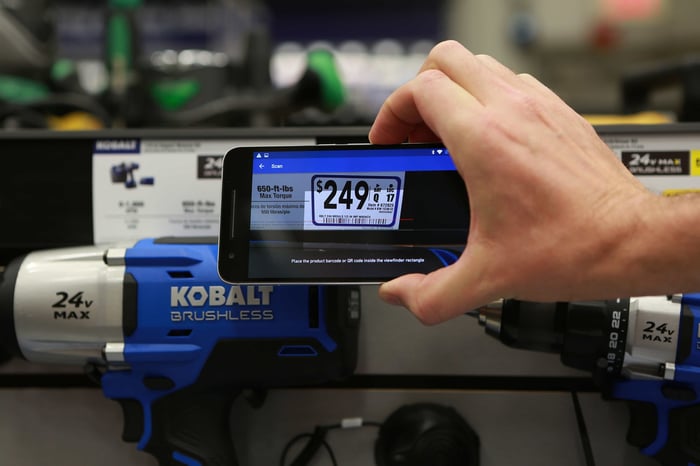 Ellison said during the earnings call, "There are very few large retailers in America delivering a 2.6% comp growth almost exclusively from the brick-and-mortar stores." That's a fair point, considering how much digital growth contributed to many retailers' bottom lines. But it's weak even as a defense, as Ellison also notes that it's hard to grow storefronts these days without a strong online presence. Customers often do research online and finish the sale in store or check out products in-store and complete the transaction online. In today's retail world, an omnichannel offering is crucial to growth, so the lack of digital focus is slowing down more than e-commerce sales.

So what's holding the company back? Ellison noted that when he came on board, the company was struggling to maintain a positive top line. There was a major overhaul for the whole company on the agenda, and that's been the focus in the two years he has been leading the home improvement giant.

Lowe's is already benefiting from his other initiatives. There are four parts to the new strategic focus: Supply chain improvements, better merchandising, upgraded operational efficiencies, and increasing customer engagement. For the time being, changes are being implemented across the board in stores to elicit benefits in all of these areas.

Operational efficiencies: One example is an improved scheduling system that ensures associates are in stores in the right numbers to help customers and leverages associate scheduling for a more efficient payroll.

In light of the in-store changes, digital had taken a back seat. The Lowes.com platform was ten years old before Ellison began the transformation. He elaborated in February, "The good news is at Lowe's.com, we know exactly what our issues are, and we have temporarily slowed our dot-com growth to resolve those issues."

Home Depot recognized earlier that a strong digital presence is a key to continued growth in all areas and is investing $11 billion in a major e-commerce overhaul. Its e-commerce sales are growing double digits, and customers are taking advantage of the company's many options centered around digital.

Lowe's hasn't made the same investments while it revamped stores, but as the company sees brick-and-mortar stability, digital will take center stage.

Lowe's shared its fiscal 2020 outlook and is guiding for revenue growth of 2.5% to 3.0% and comparable-sales growth of 3.0% to 3.5%. One year into its transformation, the company touted its "strong expense management, improving gross margin, and enhanced process execution."

Management isn't worried, and investors shouldn't be, either. Ellison said, "We have a detailed road map in place to modernize our e-commerce platform and accelerate Lowes.com sales, which combined with the sales productivity improvement in our physical stores, underscores our opportunity to unlock additional growth."