Please ensure Javascript is enabled for purposes of website accessibility
Log In Help Join The Motley Fool
Free Article Join Over 1 Million Premium Members And Get More In-Depth Stock Guidance and Research
By Keith Speights - Mar 15, 2020 at 7:55AM

These three stocks might be down temporarily. But they still have great long-term growth prospects.

Two words that haven't been on investors' minds in more than a decade now are the reality: bear market. Escalating global fears about the coronavirus disease COVID-19 have wreaked havoc on stocks. Travel to Europe has been largely halted. Professional sports leagues are suspending their seasons. There won't be any March Madness for college basketball fans.

Should investors wring their hands in worry and panic? Not at all. A far better reaction is to take Warren Buffett's advice to "be greedy when others are fearful." That means you should buy quality stocks that are now available at more attractive prices than in the past.

But which stocks are smart choices? If you've got $5,000 to invest right now, here are three stocks I think are great ones to buy during the coronavirus-caused bear market. 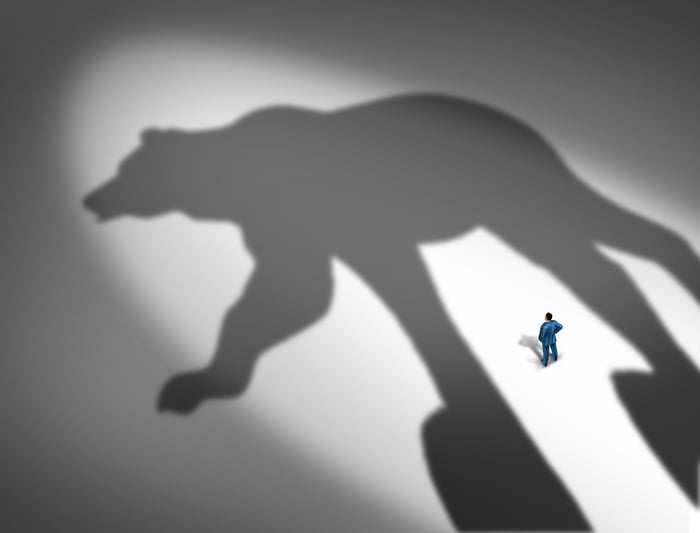 Bristol Myers Squibb' (BMY 0.16%) stock hasn't fallen quite as much as the S&P 500 during the market meltdown but isn't too far behind. But the outlook for the drugmaker is just as good now as it was earlier this year when the pharmaceutical stock was at a 52-week high.

Thanks to its acquisition of Celgene last year, BMS now claims a pipeline that's chock-full of potential blockbuster drugs. It should win Food and Drug Administration approval for ozanimod in treating relapsed multiple sclerosis within the next couple of weeks. FDA approval of cancer cell therapy liso-cel could be on the way by Aug. 17. The company should also soon file for U.S. approval of another cell therapy, ide-cel, in treating multiple myeloma, a type of blood cancer.

Because of coronavirus concerns weighing on the overall stock market, BMS stock is now dirt cheap. Its shares trade at only 9.6 times expected earnings. With multiple pipeline candidates likely to win approval in the next year or so, the company's growth prospects make its valuation even more attractive. And BMS' growth potential shouldn't be impacted in the slightest by COVID-19.

Guardant Health (GH -1.02%), on the other hand, isn't such an obvious bargain. But the stock is less expensive than it was just a few weeks ago thanks to a certain pesky virus.

As is the case with Bristol Myers Squibb, Guardant Health's business shouldn't be affected by the COVID-19 pandemic. Sales are going through the roof for the company's two liquid biopsy products, Guardant360 and GuardantOMNI. The former product helps identify the best treatment for patients with advanced-stage cancer. The latter is used by drugmakers to screen patients for clinical trials of cancer drugs. The coronavirus pandemic won't put even a dent in the demand for the two products.

Actually, there are a couple of catalysts likely on the way that will boost sales for Guardant360. Guardant Health could receive FDA approval for the liquid biopsy later this year. The company also hopes to win a Medicare national coverage determination (NCD) for Guardant360 that would establish a standard reimbursement for the liquid biopsy in treating multiple types of cancer for all Medicare beneficiaries.

Guardant Health estimates that the U.S. market potential for Guardant360 by itself is close to $6 billion annually. But there's an even greater opportunity for the company's Lunar assays that are currently available for research use only. These liquid biopsies hold the promise to detect cancer at early stages as well as monitor for recurrence. The potential market for the products could top $45 billion. With Guardant Health's market cap now below $8 billion, the stock looks like an attractive pick for long-term investors.

I'd put MongoDB (MDB -1.51%) in the same boat as Guardant Health. The stock isn't exactly cheap based on conventional valuation metrics, but the coronavirus-fueled market sell-off has caused it to trade at a discount from earlier this year. And I have no doubt that MongoDB will bounce back in a big way.

Regardless of what happens with COVID-19, businesses will keep on churning out ginormous quantities of data. Unlike in the past, though, all of this data won't be the kind that can fit nicely into rows and columns. Instead, today's world uses a lot of unstructured data such as audio, videos, and text.

Major databases sold by Oracle and IBM were designed decades ago and weren't built to support unstructured data. MongoDB's database was. It was also created from scratch to be run anywhere, from an onsite data center to the cloud. That's a big plus with organizations across the world moving their apps and data to the cloud.

It's not surprising that MongoDB's Atlas cloud-based database service is the company's biggest growth driver. I expect continued strong growth from Atlas for years to come.