Please ensure Javascript is enabled for purposes of website accessibility
Log In Help Join The Motley Fool
Free Article Join Over 1 Million Premium Members And Get More In-Depth Stock Guidance and Research
By Daniel Miller - Updated Mar 15, 2020 at 3:55AM

Here's how Wall Street finished the week on a high note.

By the time the markets opened Friday, it was clear there would be no way around logging a brutal week on Wall Street. But an announcement late Friday afternoon from President Donald Trump managed to ignite some form of optimism and helped the markets end on a high note with the Dow 30 and S&P 500 finishing up 9.4% and 9.3%, respectively.

For investors, it became clear later in the week that the government was willing to take any measures necessary to help limit negative economic impact from the COVID-19 coronavirus outbreak. That was further confirmed Saturday morning when the House of Representatives approved an economic stimulus measure by a vote of 363 to 40, and the approval came with promises that more measures would be taken to help multiple ailing industries including airlines, healthcare, and entertainment. 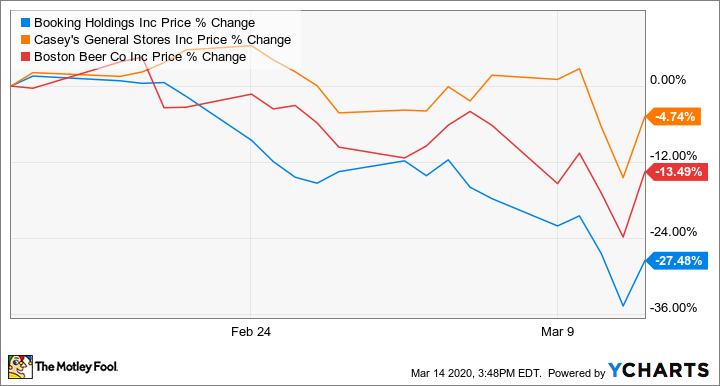 Looking at these specific stocks, it's no shock that Booking Holdings -- a business that revolves around travel booking services, hotel rooms, airline tickets, rental cars, and restaurant reservations, among others -- has been the hardest hit over the past month. While travel between U.S. and Europe is a small percentage of global traffic, consumers are understandably reducing travel in general, and until the virus is under control, Booking Holdings will feel a pinch.

Social distancing doesn't exactly spell disaster for Boston Beer, especially when considering the stock's long-term growth story, but there's no doubt a reduction to social gatherings and a focus on consumer staples purchases will be another near-term headwind. Casey's stock has been surprisingly resilient thus far, especially considering the hit that business could take if many companies opt to keep their employees home, driving and spending less. 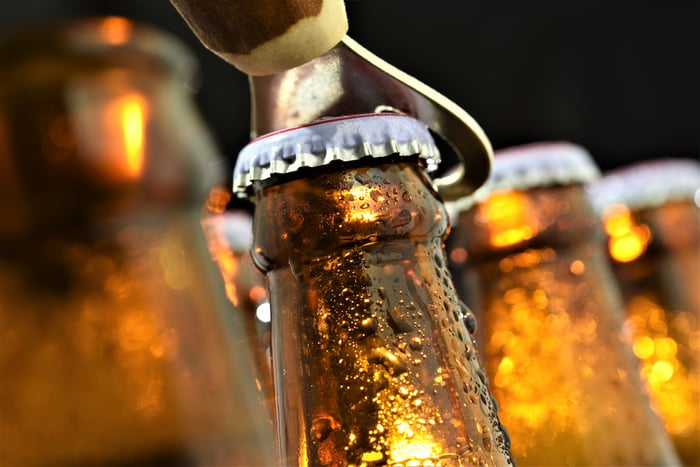 Those previously mentioned examples hardly scratch the surface of challenges that these three companies face; uncertainty alone is not rewarded on Wall Street. Investors will need to take the massive swings in the stock market with a grain of salt and understand it's going to get worse before it gets better. Dr. Marty Makary, professor at Johns Hopkins University, noted that "there are probably 25 to 50 people who have the virus for every one person who is confirmed."

Nobody likes to watch their portfolio value tank along with the markets, and it's easier said than done to avoid knee-jerk reactions. But history has proved time and time again, whether it's terrorist attacks, other pandemics, or a financial crisis, the markets will rebound over time. This is a short-term problem that shouldn't impact stocks long-term, and it gives savvy investors a chance to freshen up their investing thesis, and perhaps even scoop up shares of their favorite companies at a discount.