2019 was full of new initiatives at Nordstrom. Will it see fruits from those efforts in 2020?

While many competitors are shuttering stores, Nordstrom (JWN -1.75%) recently opened a seven-floor flagship location in New York City. The store features an array of designer clothing and several eateries plus a collection of specialty enterprises and services.

This is the heart of what Nordstrom does -- creating a lifestyle experience that anticipates and delivers on customers' needs. This is why the company is tops in customer service surveys and why it's still generating revenue in the newly complex retail environment. But can it actually increase the company's bottom line? 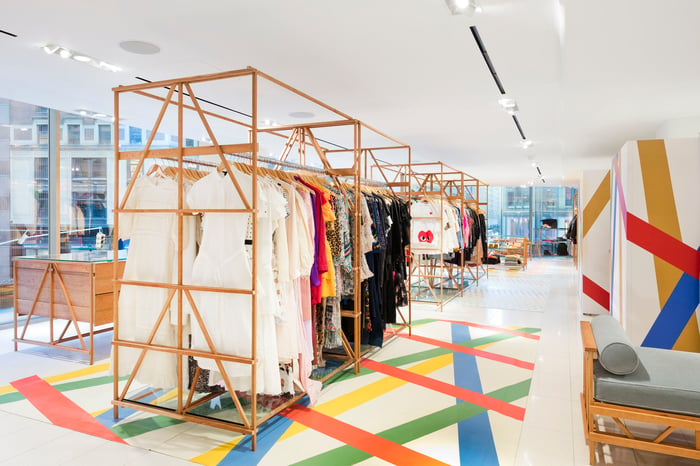 Nordstrom was chock-full of new ideas in 2019. These were some of the highlights:

The New York flagship itself, although years in the making, was a bold move in the suffering retail climate.

All of these concepts work together with the retailer's strong omni-channel presence that features 116 full stores, 248 Nordstrom Rack off-price stores, and a successful digital program.

Another new development is the closing out of Trunk Club for redistribution in regular Nordstrom stores. Nordstrom spent $350 million on the purchase of Trunk Club's six stores and wrote off $200 million of that in 2016.

Why these initiatives matter

Customers who use alterations or styling services spend three to five times more on average. Customers also appreciate the convenience of order pickup, doubling their spend over time. This service leverages inventory in the market, making it our most profitable transaction. In the fourth quarter, order pickup sales grew more than 100% and contributed to more than half of Full-Price digital growth. In the five markets where we rolled out our market strategy, order pickup sales grew 160%.

The investments are also paying off in increased customer service scores, which translate into higher sales, but it's struggling the way many retailers are today in figuring out how to stay cost-effective while implementing aggressive marketing schemes to keep the customers coming.

One highlight of the fourth-quarter results was a $225 million in savings, topping the $200 million that the company had forecast. However, fourth quarter earnings per share were $1.23, including a $0.15 charge from the Trunk Club integration and $0.04 of debt refinancing. Even with those included, earnings of $1.42 per share fell below the $1.48 per share in earnings from the previous year's period.

Sales continued to rise at a slight 1.3%, with a strong showing from the New York flagship. Sales from full-price stores grew 1% while the off-price segment's sales increased 1.8%, but there was less promotional activity than last year.

Erik Nordstrom mentioned five key initiatives to keep up the momentum in 2020. None of them are new, as all expand on services already offered. The first is launching the New York and Los Angeles market strategy into five other markets: Philadelphia, Boston, Seattle, Toronto, and Washington, D.C. The second is opening new Local locations in New York and Los Angeles and offering more services at more Rack locations. Third is a dedicated Canadian e-commerce site, fourth is expanding the West Coast supply chain network, and fifth is the integration of Trunk Club into existing stores.

Nordstrom is still floating while many of its competitors are hanging on to a raft, but the market pullback has almost halved the consumer discretionary company's share price since the beginning of 2020. We can see that its initiatives are working, but it's still unclear whether they'll be enough to pull the company back to smooth sailing over the course of a single year.