Please ensure Javascript is enabled for purposes of website accessibility
Log In Help Join The Motley Fool
Free Article Join Over 1 Million Premium Members And Get More In-Depth Stock Guidance and Research
By Catherine Brock - Mar 15, 2020 at 7:32AM

You'd never know by her lifestyle that she was rich.

No one loves the safety lecture on an airplane, but you might pay closer attention next time you have the chance. And it won't be because you don't know how to buckle the seat belt. You'll be trying to decide if your flight attendant is actually a secret multi-millionaire.

In 2013, a former flight attendant passed away at age 93. She had no family and she lived simply, in a rowhouse formerly owned by her parents. Her name was Doris Schwartz, and as it turned out, she was rich.

Once executors unraveled the details of Schwartz' estate, they located more than $4 million spread across countries and asset classes. According to her wishes, the bulk of her estate went to the York County Community Foundation to fund education. That endowment, $3.4 million, was sizable enough to make headlines. 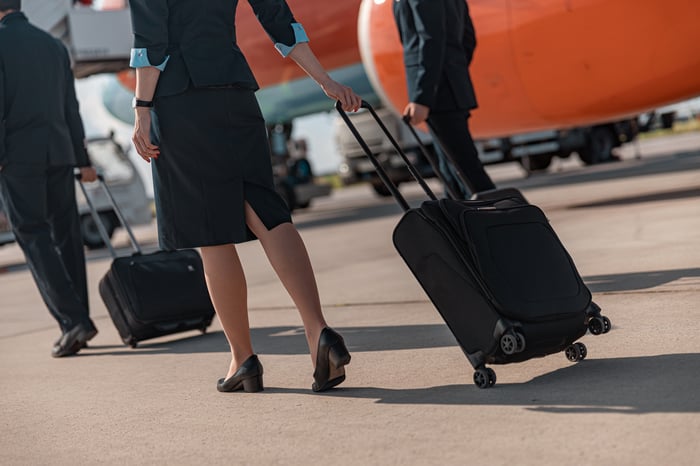 There aren't a ton of details available on Schwartz' life, other than those reported by her two friends Nancy Frey and Ken Smith. But from those accounts, we can piece together how Schwartz' amazing wealth took shape over her 93-year lifetime.

She lived below her means

Schwartz had the means to fix up her aging home, wear nice clothes, and drive a fancy car. But she didn't do any of those things. Her 100-year-old home had never been renovated and she drove a 1995 Toyota. According to Frey, Schwartz rarely spent money and lived "like a bag lady." Schwartz would even instruct her friend to buy only items that were on sale at the grocery store. She didn't even invest in notepads, preferring to use the backs of used envelopes to keep track of her investments.

Though Schwartz took it to an extreme, living simply is a powerful wealth-building strategy. Most of us don't have complete control over our income, but we can control our spending. If you're not saving as much as you'd like, take stock of your lifestyle. Could you do away with a few expensive conveniences? The answer is usually yes, and having the discipline to do it could make you rich.

According to Frey, Schwartz lived on peanut butter and ice cream. As the story goes, she'd eat peanut butter straight from the jar, and then leave the empty jar and spoon sitting around her house. And when Frey brought Schwartz a gallon of ice cream, she'd eat only that until it was gone.

Will eating peanut butter and ice cream improve your wealth? Not a chance. But living life on your own terms might. The people we interact with heavily influence how we spend money. Friends take exotic vacations and drive fast cars, and we want those things too. Siblings buy nice houses, and we need to keep up. Co-workers eat lunch out every day, and we adopt that norm. The tendency to adopt spending habits of those around us is called social spending, or "keeping up with the Joneses."

Rising above those influences is challenging. But defining your true needs, as opposed to socially influenced wants, will help you slash spending and supercharge your savings.

She studied the stock market

While Schwartz didn't talk about her wealth, those close to her knew she followed the stock market. She'd watch stock market reporting on television and jot down cryptic notes and calculations. She kept stacks of those notes -- on those used envelopes -- all over her house. After her death, Schwartz' lawyer described her as a "knowledgeable and astute investor."

Before Schwartz' career as a flight attendant, she was a French teacher. There's no evidence she had any formal training in finance or investing. But she took it upon herself to learn.

The takeaway? Be a student of investing. Learn best practices of diversification, asset allocation, and rebalancing. Know how to evaluate mutual funds on performance and expense ratios. If you want to invest in individual stocks, do the research. Read up on companies, learn their business models, and follow their earnings reports.

In addition to her U.S. stock market holdings, Schwartz held bank accounts in Singapore and investments in Europe and Japan. She also had a safe deposit box in Switzerland that was filled with gold bullion. It was retrieved by her lawyer and delivered to her domestic bank by an armored truck.

Schwartz' approach to diversification was pretty drastic. In reality, most of us don't need to pepper money all over the world. We can get by with 20 or more individual stocks, plus some investment-grade bonds of varying maturities. Low-cost mutual funds across equities and debt instruments will also do the job. The point is, diversify. Investing in different types of assets keeps volatility -- and the stress it causes -- at bay.

Live simply and save

Schwartz had a narrow definition of her own needs in life -- with peanut butter and ice cream being near the top of the list. Her simple lifestyle enabled her to save and her willingness to learn empowered her to make wise investment choices. That's how she became a secret millionaire. What will your story be?