Please ensure Javascript is enabled for purposes of website accessibility
Log In Help Join The Motley Fool
Free Article Join Over 1 Million Premium Members And Get More In-Depth Stock Guidance and Research
By Will Healy - Mar 16, 2020 at 10:45AM

Comparing the Google parent to its Chinese counterpart means factoring in your tolerance for risk and desire for growth.

Alphabet (GOOGL -0.21%) (GOOG -0.27%) and Baidu (BIDU 1.86%) have evolved and grown into leading tech stocks in their respective countries. While Baidu drives internet search in the Chinese-language world, Alphabet's Google has become the dominant search engine overall. Though leadership in this area has benefited both companies, the question for investors is: Which one will make a more suitable stock investment?

Baidu operates in the country hardest hit so far by novel coronavirus pandemic, but it's still too early to say how the stock will be affected. The company's most recent earnings report was strong, but it only reported earnings through Dec. 31, which was before the worst effects of COVID-19 shut down parts of the Chinese economy. In its latest earnings, reported revenue of 28.9 billion yuan ($4.12 billion) surpassed expectations. The 9.19 billion yuan ($1.31 billion) in non-GAAP income attributable to Baidu also came in dramatically ahead of the 6.51 billion yuan ($930 million) for the same quarter last year.

Despite the strong showing on earnings, Baidu trades at a significant discount. Its forward P/E ratio comes in at about 16.2. That ratio actually lags the S&P 500 average P/E of around 19.4.

Baidu also benefits from the fact that it operates in a country of almost 1.44 billion people with an expanding middle class. And yet the market cap of Baidu dramatically lags that of its U.S.-based counterpart. Baidu's $34.5 billion market cap means Alphabet maintains a market cap about 23 times as large. 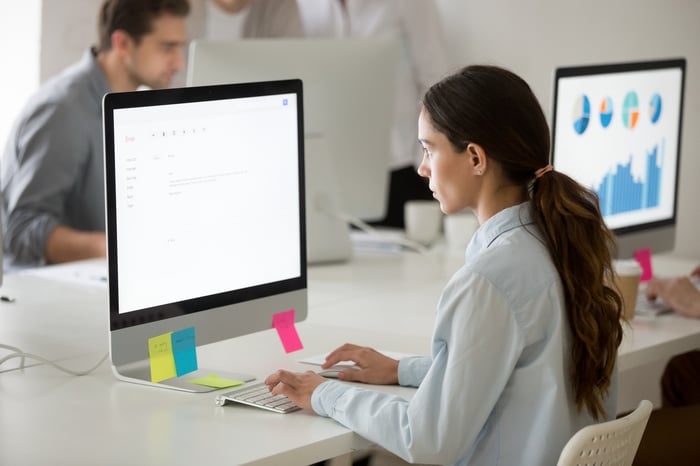 Baidu looks poised to see more profit growth long-term. Wall Street forecasts an earnings decline of 12% for this year. However, over the next five years, analysts predict earnings will grow by an average of 9.9% per year. This is more than double the rate of Alphabet.

Unfortunately for investors, Baidu is cheaper for a reason, namely the nature of Baidu stock. Baidu stock is not actually stock in Baidu the company. Due to Chinese prohibitions against foreign ownership, investors buy a Cayman Islands-based holding company through which Baidu passes its cash flows. While it remains unlikely Baidu would do anything to upset this arrangement, it places shareholders at a disadvantage that may temper enthusiasm for the stock.

Moreover, about one-fourth of its revenue comes from its streaming video subsidiary, iQiyi. As iQiyi does not yet turn a profit, this weighs on margins. Furthermore, much like Alphabet outside of China, Baidu faces competition from Tencent in the Chinese ad space.

Baidu also lags Alphabet's Google in the internet search market. According to Statcounter, Google claims 92.1% of the search engine market. Although Baidu remains the largest Chinese-language search engine, only 1.5% of the world's internet searches go through its platform. Google also faces a minimal amount of competition from Microsoft's Bing and other search engines.

This helps Alphabet to remain a revenue powerhouse. In its most recent quarter, it brought in about $46.1 billion in revenue. The company reported that about $37.9 billion of that was ad revenue from the search engine, YouTube, and other properties.

For all of the talk about Waymo, Verily Life Sciences, Android, and other company ventures, the overwhelming majority of Alphabet's revenue still comes from ads originating from queries on its search engine. These ads face increasing competition from Facebook and Amazon. Hence, the other lines of business should hold the company in good stead as advertising falls as a percentage of revenue.

Despite its market share power, Alphabet has not carried a premium valuation in the face of the novel coronavirus pandemic. It currently trades at a forward P/E ratio of 24. That has come down substantially from the average earnings multiple of 34.1 that the company commanded over the previous five years.

However, that lower P/E ratio comes at a cost in the form of falling earnings growth. In the previous five years, Alphabet's profit rose by an average of 14.9% per year. Over the next five years, Wall Street believes that profit increases will fall to just 4.8% per year.

Given the valuation and growth metrics, the decision on whether to choose Baidu or Alphabet comes down to risk. In terms of the financial metrics, Baidu appears to hold an advantage.

That said, investors should not ignore the risk. Baidu has historically lagged Alphabet on valuation. Moreover, between the holding company status of stocks like Baidu and the ongoing trade disputes, China has remained a source of continuing geopolitical tension. The coronavirus outbreak merely serves as the latest chapter in the complicated relationship between the U.S. and China.

Also, even with long-term growth slowing into the mid-single-digits, investors cannot ignore the power of Google's market dominance in critical areas. This will continue to serve investors in Alphabet well.

However, for those who can handle some level of risk, Baidu appears to offer more growth potential.