The payment processors are having a pretty rough start to the week.

To say that Monday is a volatile day in the stock market would be a massive understatement. After plunging by about 10% at the open and triggering a market circuit breaker, the major market indices have rebounded a bit. As of 11:15 a.m. EDT, the Dow Jones Industrial Average and S&P 500 benchmark indices are down by roughly 7% and 6%, respectively.

Unlike during last week's sell-off, the financial sector isn't doing too much worse than the overall stock market, with the Financial Select Sector SPDR ETF (XLF 3.69%) down less than 8%. 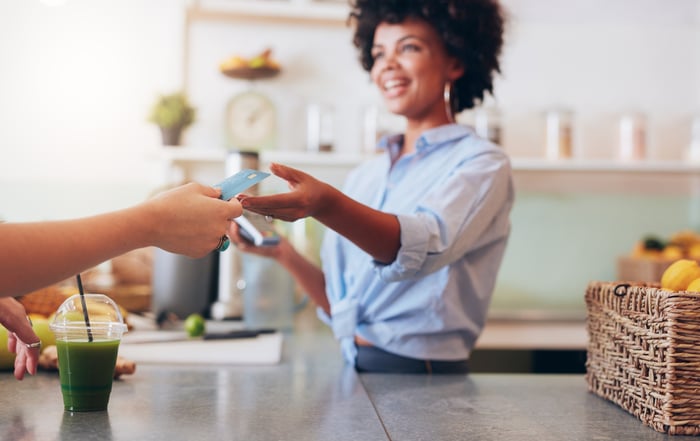 In a nutshell, as the COVID-19 (commonly referred to as the novel coronavirus) pandemic unfolds, it's looking more like the U.S. response to the outbreak is going to lead to a recession. Even if it doesn't, the near-shutdown of the economy in most areas of the country is likely to lead to a greater-than-anticipated drop in consumer spending.

While each of the five companies mentioned generates revenue in a somewhat unique way, all five earn a significant amount of their revenue from payment processing -- that is, acting as a middleman in financial transactions. For example, when you use your Visa card to pay for a purchase, Visa moves money from your financial institution into the merchant's account, taking a small percentage of the transaction as its service fee. If a prolonged economic slowdown occurs, it's virtually certain that transaction volume will drop significantly.

American Express and Discover also act as the lenders in financial transactions. For example, when you use your American Express-issued card to make a purchase, Amex facilitates the transaction but also is the financial institution that lends you the money (this is referred to as a "closed loop" payment system). In tougher times, consumer loan defaults tend to rise, so these two companies could get hit extra hard. Discover also has large student loan and home equity loan businesses that could see a wave of defaults.

Visa, Mastercard, and PayPal are third-party facilitators of financial transactions and don't lend any money themselves. This provides a bit of relative safety during tough times and likely has a lot to do with these stocks holding up better than Amex and Discover today.

It's likely to be a bumpy road for stocks in general, at least until we start seeing serious signs that containment efforts are helping to stop the spread of the novel coronavirus in the U.S. Having said that, all five of these companies are financially solid, and the stocks are now well off their highs, which could be interesting from a long-term investor's perspective.