Please ensure Javascript is enabled for purposes of website accessibility
Log In Help Join The Motley Fool
Free Article Join Over 1 Million Premium Members And Get More In-Depth Stock Guidance and Research
By Dan Caplinger - Mar 16, 2020 at 8:32AM

A simple, conservative method for investing is doing surprisingly poorly. Find out why.

2020 will be a historic year, with the COVID-19 outbreak sparking an extremely fast and sharp stock market drop into bear market territory. Even after the losses that investors have seen, there's still plenty of uncertainty about what the future will hold. Even the blue chip stocks in the Dow Jones Industrials (^DJI 0.00%) have suffered significant losses, with every single one of the 30 stocks in the average down for the year as of March 13.

Defensively minded investors have often turned to a simple strategy that's easy to follow and has often offered some protection from downturns in the past. But the coronavirus has been highly disruptive to many investing strategies. The Dogs of the Dow have a solid track record, but they don't win every single year, and at least so far, the strategy's ability to outpace the broader average in 2020 is in great doubt. Let's take a closer look to find out why.

In order to follow the Dogs of the Dow strategy, all you have to do is look up which 10 stocks in the Dow Jones Industrials had the highest dividend yields at the beginning of the year. Once you know those 10 stocks, the strategy has you divide your portfolio into 10 equal parts and invest the same amount in all 10 of the Dogs of the Dow.

The basis for the Dogs of the Dow method is the belief that stocks fall out of favor one year are good prospects the next, and that companies paying substantial dividends offer some added protection compared to those with lower dividend yields. That's been true more often than not lately, with the annual return of the Dogs beating out the broader Dow in seven of the past 10 years. 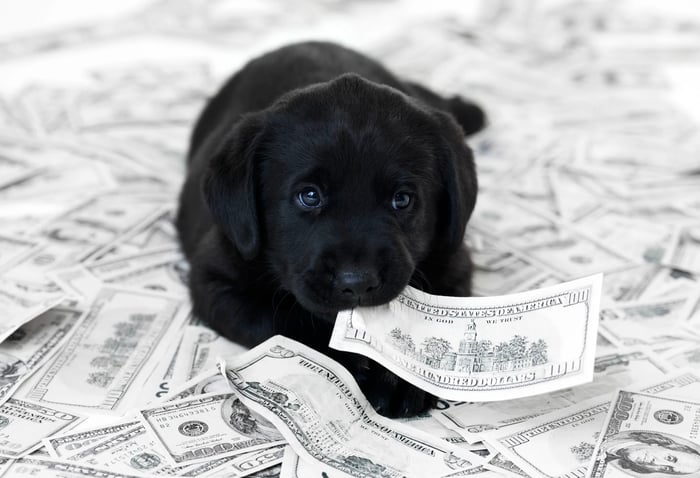 A few major trends are largely responsible for the Dogs' underperformance so far this year:

In addition, the equal-weight method the Dogs of the Dow strategy uses has hurt its performance. Only three of this year's Dogs have share prices above $100, and that makes their influence on the price-weighted Dow Jones Industrial Average minimal. For instance, ExxonMobil's 45% drop gets a weighting of 10% in the Dogs, but only 1.1% in the broader benchmark.

Can the Dogs catch up?

We're less than three months into 2020, so obviously, there's a lot of time for the Dogs of the Dow to regain some of their losses. To do so, though, it'll take major reversals of several key trends like the declines in energy and materials stocks. A solution to the COVID-19 pandemic could bring such a reversal. Alternatively, it's possible that if the rest of the Dow Jones Industrials see further losses, it could eliminate the advantage that the broader average of blue chip stocks has had so far this year.

Ready to Supercharge Your Passive Income? 3 Dividend Stocks You Can't Go Wrong With

3 Stocks That Can Pay You More Than Social Security Benefits