The apparel manufacturer is taking a hit as the pandemic is a plague on consumer spending.

Pummeled by an abrupt decline in global retail demand resulting from the COVID-19 pandemic, sneaker and sportswear titan Nike (NKE 2.93%) may suffer a $3.5 billion drop in revenue in its current fourth quarter of fiscal 2020, analysts at investment banking company Cowen revealed on Monday.

According to Reuters, Cowen sees a projected sales drop for Q4 (which ends in May) of 34%. The investment bank estimates this will result in a loss per share of $0.04. For reference, the athletic apparel maker generated $0.62 in earnings per share in the fourth quarter of fiscal 2019.

Multiple impacts from the coronavirus

Nike is battling the effects of COVID-19 on a number of fronts. The company is losing valuable marketing and promotional opportunities in its biggest market, the U.S., as major sporting cycles like the NBA season are suspended.

Predictably, other prominent international promotional opportunities are also drying up. The English Premier League (in which Nike sponsors three of the 20 soccer teams' jerseys) has ground to a halt as it tries to determine how and if to proceed with remaining games on its calendar.

Compounding the loss of demand drivers, Nike announced Sunday that it's closing all of its U.S. stores as well as those in Canada, Australia, New Zealand, and Western Europe for at least two weeks, effective today. Cowen analysts believe that declining mall traffic will also hurt sales in department stores and sporting goods stores.

All of these, of course, are top-line impacts, and as I mentioned yesterday in an article on Nike's U.S. store shutterings, shareholders don't yet have a grasp of how current and anticipated supply-chain disruptions will stress the company's cost of goods sold. Nike will report fiscal third-quarter 2020 earnings in a little over a week, and hopefully, management will have enough visibility into lost sales and inventory status to provide investors with estimated quantitative impacts on revenue and earnings for the fourth quarter. Typically, Nike doesn't provide detailed quarterly numerical earnings guidance, but it may choose to do so this quarter as these aren't typical times. 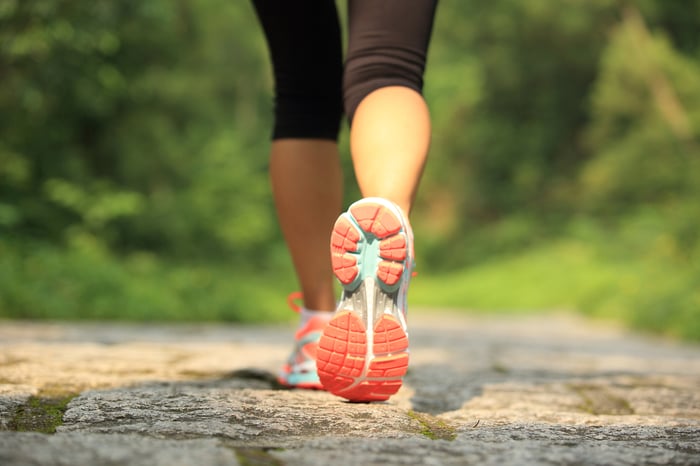 Until next week's Q3 briefing, then, what should investors make of Cowen's top- and bottom-line estimates for the fourth quarter? It's important to understand that the projected sales decrease of $3.5 billion (which implies fourth-quarter sales of $6.7 billion) is more likely to be accurate than the per-share loss estimate of $0.04. Wall Street analysts can often gauge the magnitude of a sales deceleration by performing channel checks and relying on third-party analytical data.

Yet in this disruptive chain of events -- for which there is no contemporary precedent -- it's extremely difficult for outside analysts to model changing variable costs associated with sales. It's harder still to calculate how much overhead a consumer staples giant like Nike can temporarily trim to match sales levels.

Over the short term, Nike may be inclined to leave its fixed-cost structure mostly intact in anticipation of a resumption of normal production and sales activity. In this case, fourth-quarter per-share losses may be greater than the slight loss Cowen has derived from a 34% decline in Nike's top line.

Staying the course with Nike

For current shareholders, it's unnerving to see a perennially profitable company like Nike face the sudden prospect of quarterly losses. But the creator of the Swoosh logo has an extremely healthy current ratio of nearly 2.0 (meaning that current assets outnumber current obligations by 2 to 1).

Nike also has incurred relatively modest borrowings, carrying just $3.5 billion of long-term debt on its balance sheet, against shareholder equity of more than $9 billion. If we add $3.1 billion in long-term operating lease liabilities to debt, Nike's debt-to-EBITDA ratio comes to just 1.1 times. This means that it carries a very low debt load versus its annual earnings capacity.

So while Nike's projected revenue decline is troublesome, it's likely manageable, even if the effects of COVID-19 extend beyond the company's fiscal fourth quarter. Management should provide more data and color next week in the third-quarter report and accompanying conference call. For now, I'd advise long-term shareholders to simply hold on to the stock of this dominant athletics brand, despite its current turbulence.