Please ensure Javascript is enabled for purposes of website accessibility
Log In Help Join The Motley Fool
Free Article Join Over 1 Million Premium Members And Get More In-Depth Stock Guidance and Research
By Donna Fuscaldo - Mar 16, 2020 at 9:09AM

Microsoft is overhauling its research unit, bringing the healthcare business into the fold as it aims to lead in a host of fast-growing markets.

It's an uncommon move for a technology company, but it does underscore the importance of research to Microsoft's operations. As the company strives to lead in artificial intelligence, augmented reality, and healthcare technology, scientific research is necessary.

When announcing the appointment of Eric Horvitz (the director of Microsoft's Research Labs) as its chief scientific officer, Microsoft said Horvitz will play a key role in guiding the company's "scientific directions and capabilities." That means Horvitz will be tasked with choosing the areas to focus on, and the investments to be made.

In a blog post, Horvitz said the unit will concentrate its efforts in biology, medical informatics, physics, sustainability, economics, and the social and behavioral sciences.

"The focus of the chief scientist position is to provide cross-company leadership on advances and trends related to scientific matters and on important issues and opportunities arising at the intersection of science, technology, and society," wrote Horvitz. 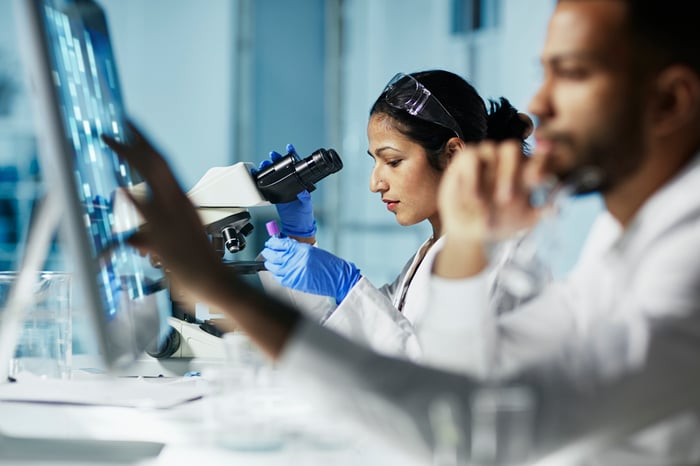 Microsoft focuses on the healthcare market with its reorg

For Microsoft, there are several revenue opportunities a deep research arm can bring. There's the product development side, for starters. Microsoft is creating healthcare provider tools, churning out products, and inking partnerships with big names in the healthcare industry.

In the fall it announced an alliance with Novartis to speed the development of new drugs. It's an area in much need of fixing. As it stands, it costs $2.6 billion on average for a pharmaceutical company to introduce a new drug.

Earlier in March, Microsoft added a new feature to its Teams collaboration and chat platform to make it easier for healthcare providers to deliver virtual care. Through the new Bookings feature, healthcare professionals can book virtual appointments.

Since the novel coronavirus outbreak, Microsoft has seen increased demand for its Teams platform. In China alone, Microsoft saw a 500% spike in usage during the quarantines. In the U.S., with schools and offices closing and events getting canceled, Microsoft expects a bigger uptick.

The new Teams feature should also see more usage as healthcare providers contend with an influx of sick patients. On top of that, Microsoft is also developing healthcare bots and creating APIs for sharing health records.

The cloud is big business for Microsoft

Then, there is the cloud side. Microsoft's cloud computing business is extremely important to its future growth and a big revenue driver today.

In its fiscal second quarter, Azure revenue was up 62%. Nevertheless, it is a distant second-place player to Amazon's Amazon Web Services. Microsoft wants to change that, and it views healthcare as one of the ways to do so.

The healthcare market is inundated with data and new regulations around how to handle that data. Healthcare companies are overwhelmed and overworked, and as a result, are increasingly turning to cloud providers for help. According to IDC, healthcare companies were expected to spend $12 billion on the cloud last year. That figure is projected to rise in 2020 and beyond. That's a big opportunity for Microsoft.

In order to succeed, Microsoft will need to innovate, and that's where the R&D focus comes in. Microsoft is not only providing healthcare companies with a safe place to store their data, but it has to come up with new services to help them harness that information.

Research and development is an integral part of a thriving tech company that wants to be around in the years to come. Microsoft recognizes that and is making moves to better align those efforts. In increasingly uncertain times, it may turn out to be a winning strategy.