Investors concerned with this question might think about investing in one instead.

If you're wondering where all those hand wipes have gone from the shelves, some have no doubt ended up at a Planet Fitness (PLNT 4.25%) facility. With over 2,000 locations globally, Planet Fitness centers certainly go through a fair share.

Investor fears brought on by the spread of COVID-19 have affected the entire stock market, and more specifically those businesses that involve social gathering or interaction. Fitness centers where patrons use common equipment are an area of concern for obvious reasons, and the shares of Planet Fitness have dropped more than 40% in the last three weeks, beyond the approximate 25% loss of the S&P 500. But insiders are taking this opportunity to buy, and you should too. 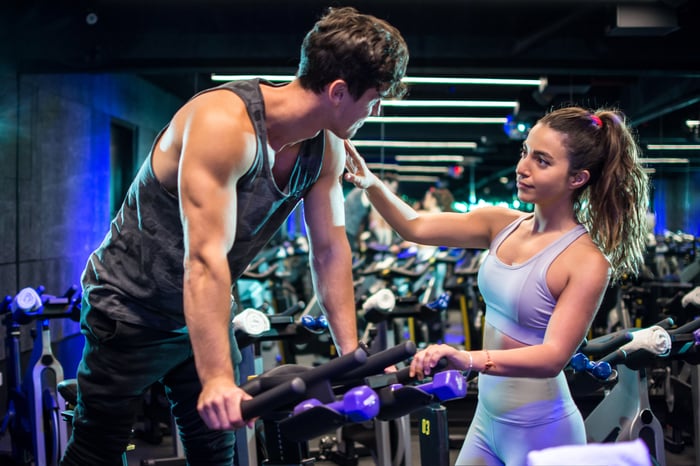 In the last week, company insiders, including the CEO, CFO, President, and a corporate director, have purchased shares worth over a combined $5 million. This comes shortly after the company released its fourth quarter and full year 2019 results on Feb. 25, 2020. Sales growth over the past three years is shown below.

The growth of the business has been strong over the last few years, and the stock price has followed. Now, however, as entire cities work to prevent the spread of COVID-19, investors have reacted to the risks of owning a consumer discretionary business, which take a major hit from social distancing efforts.

After all, there's a reason so many people have been recently asking Google, "Should I go to the gym?"

It goes without saying that the primary concern in this situation is everyone's health and welfare. But investors should remain optimistic that the virus will ultimately subside and the market will once again rally. And it seems that Planet Fitness insiders aren't waiting for the market to uptick. You'll notice that as the company has grown, its valuation, based on price-to-earnings ratio, is back to where it was over two years ago. 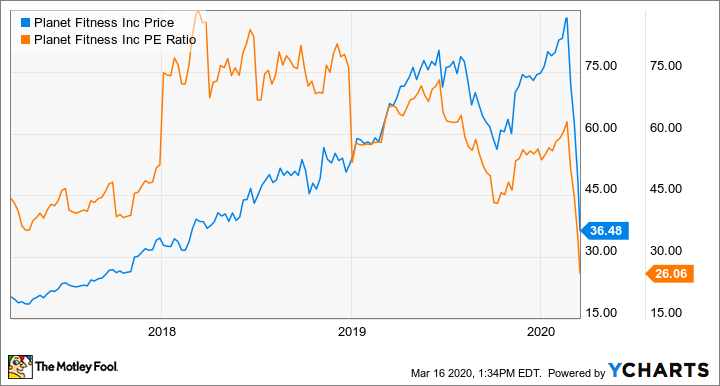 It's important to reconsider whether visiting a public gym is a good idea right now. But concern about Planet Fitness's business fundamentals is largely over-hyped. There's no doubt its short term financials will be affected as fewer people venture out into public and many gyms close to mitigate contamination.

For now, plenty of people will probably avoid going to the gym, and for good cause. But at $10 per month, people will likely continue to pay their Planet Fitness membership cost, even if they take a month or two off. The company estimates that it has the ability for 4,000 locations in the United States alone down the line, giving it a long runway for growth, and making this time of market turmoil a good opportunity to invest.