The electric car came to market six months ahead of Tesla's original timeline.

Tesla (TSLA 4.53%) Model Y deliveries are officially under way, just one year after the vehicle was first unveiled and six months ahead of the electric-car maker's initial timeline. The vehicle gives Tesla an SUV that is significantly more affordable than its flagship Model X. Priced not too far above its popular Model 3, the new SUV will almost certainly be a hit with consumers.

Not only does the Model Y position Tesla well for continued sales growth in 2020 and beyond, but it also highlights the electric-car maker's accelerated pace of execution. Recently, the automaker has been hitting targets, delivering on product plans, and expanding production capacity rapidly. The Model Y reinforces that today's Tesla is not the same Tesla investors knew less than two years ago, when Model 3 "production hell" plagued the company and targets were repeatedly missed. 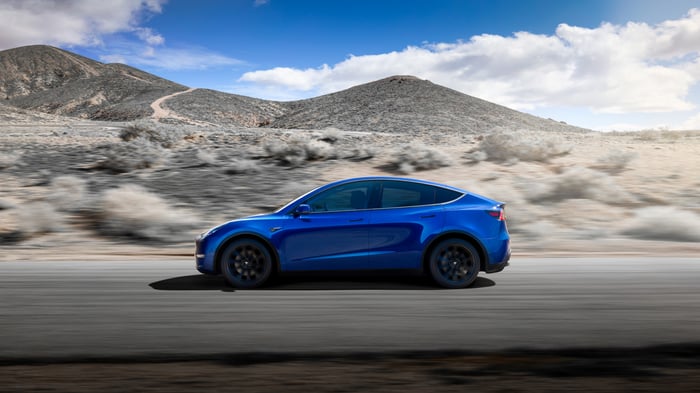 Tesla has started delivering the first Model Y SUVs to customers, the company announced on Monday.

As is always the case when Tesla launches new vehicles, initial deliveries will be in low volumes as the supply chain and manufacturing are fine-tuned. In the company's fourth-quarter update on Jan. 29, Tesla said it was still adding additional machinery in some Model Y production shops in its factory in Fremont, California. "After such expansions are done by mid-2020, installed combined Model 3 and Model Y capacity should reach 500,000 units per year," Tesla said in the quarterly update. Of course, most of this production capacity will likely be Model 3, as Tesla delivered 368,000 Model 3 vehicles last year. But it's impressive that Tesla is aiming for an annualized production run rate of a half a million Model 3 and Model Y vehicles combined by the middle of this year.

The new vehicle, which currently is only available with a long-range battery and all-wheel drive, starts at $52,990. This compares to $48,990 for the long-range, dual-motor Model 3. Of course, the Model 3 is also available in a cheaper configuration with a smaller battery and rear-wheel drive for just $39,990. So while the Model Y is still significantly cheaper than the Model X's starting price of $85,000, there's still a meaningful gap between it and the cheapest version of the Model 3.

By beginning Model Y deliveries in March, Tesla is showing it has learned from its past mistakes.

When the automaker unveiled the Model Y on in March of last year, Tesla had said it expected the first deliveries to start in the fall of 2020. Beginning deliveries of the vehicle in March shows that Tesla can under-promise and over-deliver, contrary to over-promising and under-delivering with the Model 3, when the automaker repeatedly failed to hit production and delivery targets.