The novel coronavirus poses a very direct threat to this particular niche of the entertainment industry.

The federal interest rate cut that caused a marketwide panic today didn't really factor into Hollywood's worries. The companies mentioned above are suffering some very direct effects from the coronavirus.

First, several theater chains announced that they would limit movie audiences in order to support the disease-controlling strategy known as social distancing. AMC Theatres capped its ticket sales to 50% of the number of available seats. Regal was quick to follow suit.

But that was not enough. The governors of California and New York have ordered temporary shutdowns of public gathering spaces like bars, gyms, and movie theaters. I would be astonished if other states and major cities don't follow suit in the coming weeks.

Looking beyond these immediate revenue-slashing virus controls, movie studios are rescheduling the release of many upcoming movies, while the production of many others has been stopped. The financial effects of this virus will be felt long after audiences are allowed back into movie theaters.

Cinemark took a deeper cut than AMC today, but its share-price cuts look very similar over the longer term. Both stocks have fallen 53% over the last month as the coronavirus threat developed, and National CineMedia dropped 56% lower over the same period. IMAX's one-month market damage stopped at 38%, and Cineworld's stock has lost 85% of its value since the middle of February. 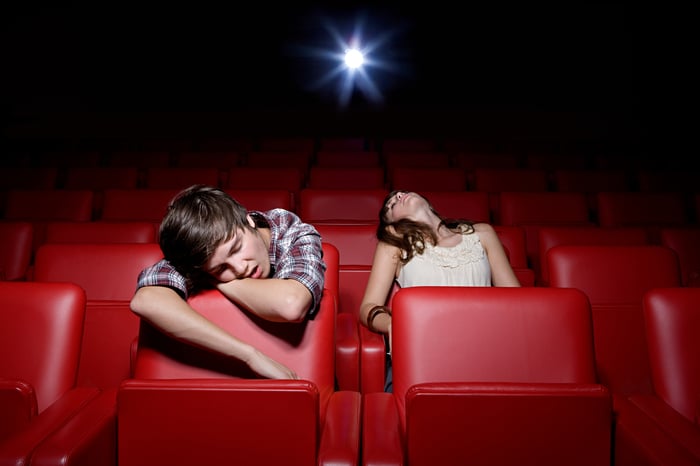 Short-sellers are placing some heavy bets against the biggest names here; 49% of AMC's shares and 22% of Cinemark's stock were sold short at the most recent update. IMAX and National CineMedia had smaller but still significant shorting ratios of 7% and 6%, respectively. The one-two punch of virus-related damages on top of the long-term trend toward streaming media outlets is bringing the movie theater industry to its knees. I would think twice before investing in any of these names right now, because some of them might not survive this industrywide bundle of crises. It's easy to find much better investing ideas at the moment.