Please ensure Javascript is enabled for purposes of website accessibility
Log In Help Join The Motley Fool
Free Article Join Over 1 Million Premium Members And Get More In-Depth Stock Guidance and Research
By Danny Vena - Mar 17, 2020 at 11:44AM

There's been a surge of interest in and adoption of wearables in recent years, and 2019 proved to be the biggest yet. Worldwide shipments of wearable devices soared to 118.9 million units in the fourth quarter, growing 82% year over year, after 95% growth in Q3, a 29% increase in Q2, and 55% growth in Q1. This resulted in a record number of shipments in a single quarter, according to new data released by International Data Corp. (IDC).

The bulk of the surging demand was driven by ear-worn wearables, or hearables (which include wireless headphones and earbuds), which captured 55% of the entire market, followed by smart watches and wristbands.

As impressive as the overall growth in the wearables market was, Apple's (AAPL -0.44%) contribution was much higher. 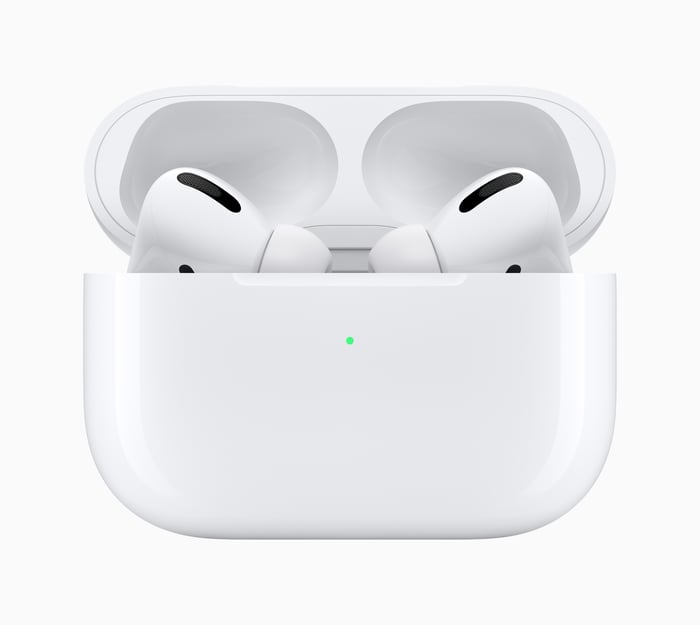 Apple AirPods and AirPods Pro were the must-have gift over the holidays. Image source: Apple.

It wasn't even close

Apple continued its commanding lead in wearables with 43.4 million units shipped, up 120% year over year. The report cited the recent refresh of AirPods, AirPods Pro, and Apple Watch devices, as well as a wide assortment of Beats products, for driving demand and increasing shipments. Apple captured 37% of the market, according to IDC, accelerating from its 35% share in the third quarter. One notable decline was Apple Watch shipments, which slipped 5% year over year, the result of product shortages, according to the report.

Xiaomi came in far behind Apple, with 12.8 million units shipped and 11% of the market. This was the second successive quarter that Apple led its Chinese smartphone rival after ceding the top spot in the second quarter. Xiaomi's smaller wristband selection contributed to its overall decline. Also putting in a noteworthy appearance was Samsung (OTC: SSNLF), with 10.56 million units and 9% market share, which also grew at a blistering pace, up 128% year over year.

Wearables have become a key component in Apple's product offerings in recent years as sales of smartphones have begun to stagnate, increasing in importance as overall growth slowed. iPhone sales regained traction last quarter -- after four successive quarters of year-over-year declines -- up 7.6% year over year, and accounting for a still-massive 61% of Apple's total revenue.

Wearables, for their part, have become the company's highest-growth segment. On the Q1 conference call, CEO Tim Cook said that sales of wearables grew 44%, the result of strong demand for AirPods and the Apple Watch. 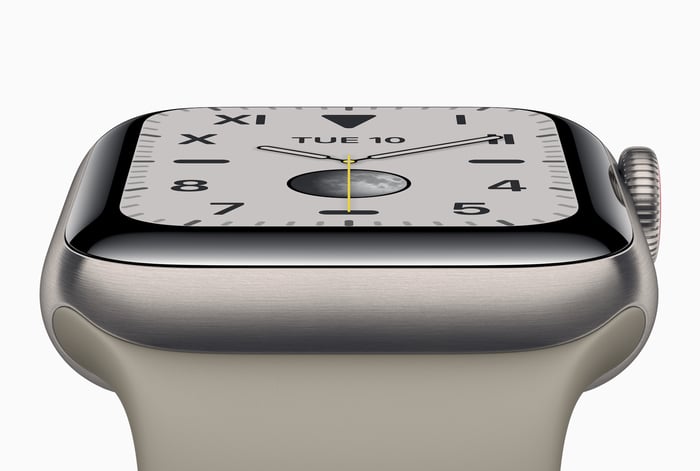 Thus far, Apple hasn't broken out the results of wearables from other parts of the wearables, home, and accessories segment. That segment's revenue jumped 37% year over year to $10 billion and represented nearly 11% of total sales. Wearables, no doubt, made up a significant part of those results.

Late last year, Evercore ISI analyst Amit Daryanani estimates that wearables could be a $60 billion business for the iPhone maker, adding $2 per share to its profits by fiscal 2023. He went on to posit that users only own about 75 million Apple Watches and 50 million AirPods -- or less than 10% of the installed base of Apple's 1 billion iPhones.

If Daryanani's estimates are even close to correct, that suggests there's still plenty of growth ahead for Apple's surging wearables segment.