Please ensure Javascript is enabled for purposes of website accessibility
Log In Help Join The Motley Fool
Free Article Join Over 1 Million Premium Members And Get More In-Depth Stock Guidance and Research
By Billy Duberstein - Mar 17, 2020 at 7:36AM

One share of each of these top stocks may look very smart 12 to 18 months from now.

There's a saying in the investment world that in a bear market, all stocks go to a correlation of one. That basically means that in times of market panic, investors sell everything, almost regardless of business quality or resilience. It's not that everything goes down by the same amount, but very rarely will great stocks go up when the market is plummeting like it has been.

That's why investors looking to be greedy when others are fearful may want to consider Amazon.com (AMZN 3.58%) at 1,689.15 per share, and Alphabet (GOOG 5.20%) (GOOGL 5.11%) at $1,084.33 per share at this moment of discounted market prices. Those companies' share prices are down 22.7% and 29.2%, respectively, from their recent all-time highs. Yet both companies' resilience and long-term outlooks remain as bright as ever. 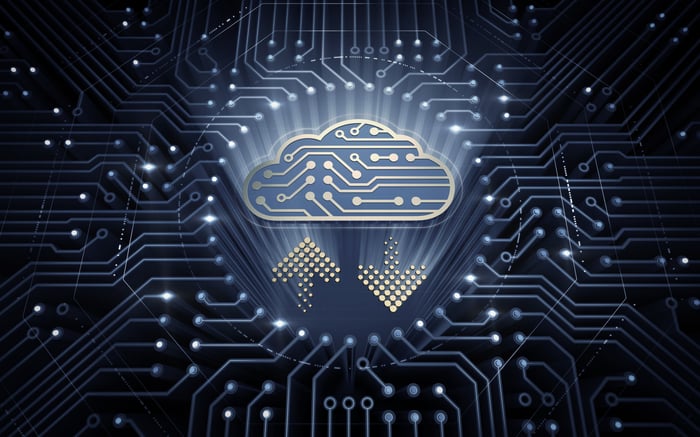 My current criteria for buying stocks amid this market plunge are:

E-commerce and cloud leader Amazon checks off each of those boxes. As we all know, Amazon is the leader in e-commerce, with about 37% of the market. Yet e-commerce itself only made up about 11% of all U.S. retail last year. That means despite Amazon's massive size, it still has room to grow in its core e-commerce segment.

Amazon is apparently seeing a surge in demand during the outbreak, as people stay at home and inundate the Seattle giant with orders for consumer staples.

While these aren't positives, they are certainly better than the alternatives faced by airlines, oil companies, and brick-and-mortar retailers, which is extremely low demand. In addition, Amazon is on the case, pledging to hire 100,000 new full- and part-time positions, in order to both fulfill the new demand and help displaced workers from restaurant and hospitality industries who may be laid off. Not only that, but Amazon is raising its hourly pay by $2 per hour through April. The total incremental cost to Amazon will be roughly $350 million for employee pay across the U.S., Canada, and the E.U.

If Amazon comes out of the crisis looking like the essential infrastructure company that it is, it may not only boost its brand image among customers, but also politicians, staving off potential antitrust pressure from Washington this election season.

Of course, Amazon is not only about e-commerce. It's also the parent company of Twitch, the streaming e-sports and online community site, which should no doubt see increased traffic during this time. That's in addition to Amazon Prime video streaming services, whose content won numerous awards at this year's Emmy's with its hit comedy Fleabag.

And of course, Amazon Web Services should do nothing but gain in importance during this critical time. In the current environment, the need for a flexibly distributed yet secure workforce becomes even more front-and-center, making cloud computing of the utmost importance. As the dominant leader in cloud computing, Amazon is poised to benefit. In this trying time, AWS is offering credits to customers in the most affected areas, and is also assisting many life sciences companies in the race to find a cure or vaccine for COVID-19.

This all adds up to increased demand for Amazon's overall product and service portfolio, making the company a long-term buy at these discounted levels.

Another company filling out my three criteria is Alphabet. No doubt, with many staying at home for long periods, consumers today will be using lots of Google search and watching YouTube videos at home. Still, that doesn't mean Alphabet will see increased sales. A majority of Alphabet's revenue comes from digital advertising, so it would certainly feel the affects of any COVID-19 economic slowdown.

No one is disputing that Alphabet's ad revenue growth will likely take a hit; however, Alphabet saw its ad revenue, between search, YouTube, and third-party properties grow 15.7% last year. In addition, 2020 was supposed to be even stronger, thanks to political advertising and the Olympics. Therefore, it seems Google's ad growth is only likely to slow, not reverse -- though there may be considerable uncertainty as to how much.

Yet while 2020 ad growth may be severely impacted, once the economy starts going again, Google search will still be the premier ad platform across the world, and YouTube will continue the torrid growth exhibited last quarter, when Alphabet revealed YouTube stand-alone revenues for the first time.

In addition, investors may be overlooking Alphabet's two other prized assets -- its Google cloud platform and its balance sheet. As of Dec. 31, Alphabet had roughly $120 billion of cash ready to deploy on either share repurchases or acquisitions.

Meanwhile, Google's cloud division grew a whopping 52.8% in 2019 to $8.9 billion, or 5.5% of revenue, but the underlying Google cloud platform infrastructure-as-a-service segment grew even faster than that. Google is a distant third-place challenger in the cloud race, but research firm Canalys estimates GCP grew 87.8% in 2019, faster than any other platform and increasing its market share from 4.2% to 5.8%. As mentioned before, nimble cloud operations will continue to be in high demand going forward, benefiting all cloud players, Google included.

Alphabet is a huge, strong company likely to only see a growth deceleration, not a growth decline, even in a recession. With a newly discounted stock price, investors should monitor whether the company will drastically increase its pace of buybacks. Either way, with a boatload of cash and a P/E ratio of just 22, Alphabet looks like an awfully big bargain at the current moment.

In times of great uncertainty and widespread market panic, it's probably wise to focus on the very best stocks in the market and hold for better times ahead. Today is one of those times.