Please ensure Javascript is enabled for purposes of website accessibility
Log In Help Join The Motley Fool
Free Article Join Over 1 Million Premium Members And Get More In-Depth Stock Guidance and Research
By Donna Fuscaldo - Mar 17, 2020 at 11:31AM

A day after launching a website to direct people in Northern California to coronavirus testing sites there are no more appointments to be had.

Verily, the company owned by Alphabet (GOOG 4.41%) (GOOGL 4.16%) that's running a website to direct people to coronavirus testing locations, is already booked up.

A day after Project Baseline went live for residents in Northern California, the booking site was inundated with requests for tests. As of Tuesday morning, the website informed users it can't schedule any more appointments. Verily did urge users to check back soon. 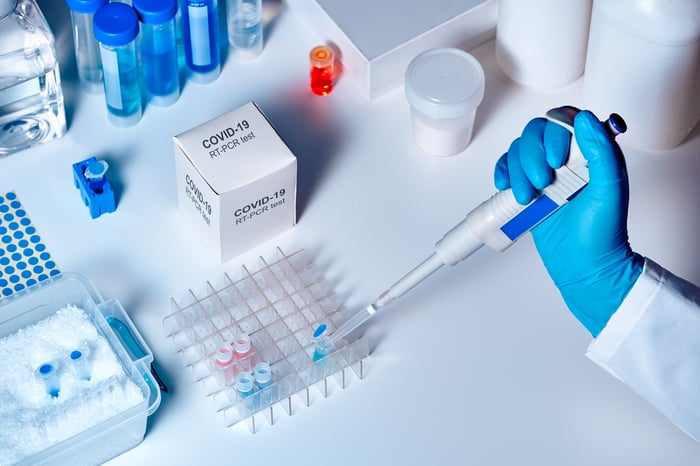 In a statement to the media, Verily said in the first few days of the pilot Website it expected appointment availability to be limited. The company said it expects testing capacity to increase in the coming days.

The COVID-19 testing site has been mired in controversy ever since President Trump talked it up during a press conference late last week. At the time Trump said Google had 1,700 engineers working on the website and that it should be operational quickly. That appeared to blindside Google, which announced its working on a coronavirus informational website and its Verily unit is launching a testing site. The testing site, however, isn't available nationally, instead just in the Bay Area of California.

The Google unit said it would test the effectiveness of the Website before rolling it out to more areas. "The program is in its early stages, and we will take the time to assess operations at pilot sites in the Bay Area before rolling out to additional sites," wrote Verily in a blog post when announcing the website. "We are working closely with Governor Newsom's office, federal authorities, and local public health authorities to ensure we have the right capabilities in place to help more people over the coming weeks."

Project Baseline was developed in 2017 with the stated goal of mapping human health. Prior to the virus outbreak, it was used mainly for people to search for clinical trials.