The effects of the coronavirus outbreak are quickly materializing in the travel and leisure industry.

Due to a steep downturn in business caused by the COVID-19 pandemic, hospitality giant Marriott (MAR 1.40%) will begin to furlough tens of thousands of its employees at properties around the globe, the Wall Street Journal reported Tuesday.

As the world's largest hotel chain, the company maintains a sizable workforce. It reported 174,000 employees on its roster at year-end 2019.

The work reductions will be unpaid, manifesting as either reduced hours or temporary leave for employees, although Marriott will continue to pay workers' health benefits. Management hopes for a full resumption of work scheduling once normal business conditions return. 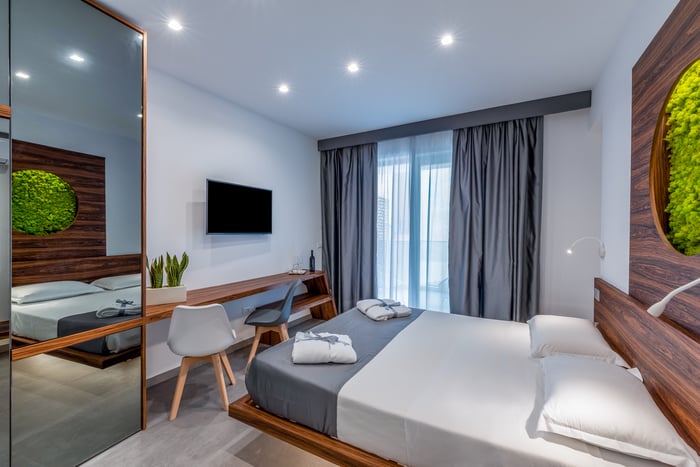 Marriott's furloughs exemplify the plight of the hotel industry, which is slated to lose $1.4 billion per week from the effects of coronavirus, according to a joint statement by the American Hotel Lodging Association and the U.S. Travel Association. Representatives from the hotel industry, including Marriott executives, were scheduled to meet with Vice President Mike Pence on Tuesday to discuss the impact of the pandemic on the hospitality business.

While the scale of Marriott's furloughs is significant, it doesn't fully represent the pressure the pandemic is placing on payrolls throughout its system. Marriott's work reductions only apply to its direct employees. These include staff at its 68 owned properties, as well as employees at its 2,100 managed properties and to a lesser extent, those working at its 5,200 franchised properties.

Investors don't have access to the status of non-Marriott staff employed directly by hotel owners across all managed and franchised locations. While these workers don't directly impact Marriott's costs, a clearer picture of total furloughed (and laid-off) employees across its entire system would paint a clearer picture of the current drag on the company's performance. Perhaps management will soon share some interim financial guidance, as the hotelier's next earnings report won't be released until late May.