The fast-food giant is instituting a number of strict safety measures in light of the coronavirus, and encouraging its franchisees to do the same.

Following in the footsteps of a number of other major restaurant and cafe chain, McDonald's (MCD 2.02%) has announced that it is shifting to takeout-and-delivery-only operation -- at least in its company-owned restaurants.

To help combat the spread of SARS-CoV-2, the coronavirus that causes the potentially fatal COVID-19 disease, all public dining areas in its more than 6,000 corporate-owned restaurants will be temporarily closed, the company announced late on Monday. And on Tuesday morning, it went a step further, and said it was "encouraging" its franchisees, who own close to 7,000 McDonald's stores, to do the same.

The no-go spaces will include the self-service beverage bars and kiosks, as well as the Play Place child care areas found in many McDonald's. Customers can still patronize the burger chain, but they will have to either place takeout orders at the counter, use the drive-thru, or order via the digital McDelivery service. 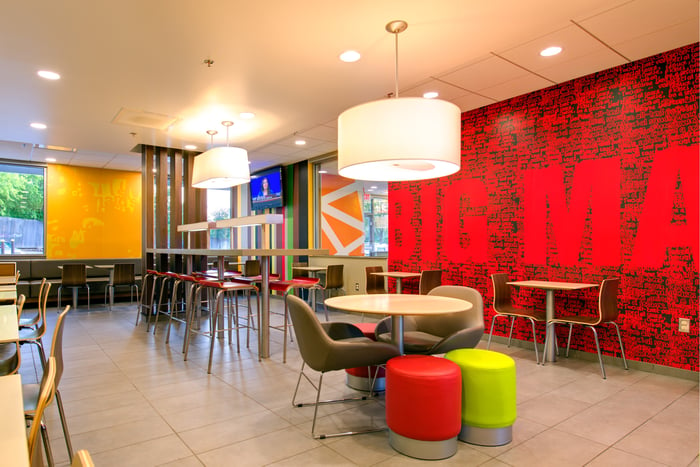 Other measures the fast-food giant is instituting across in its company-owned restaurants include supplying sanitizer for both employees and guests, and increasing the frequency with which it cleans and sanitizes what it calls "high-impact areas." McDonald's has also halted construction of new restaurants, according to an article published in The Wall Street Journal.

"We have some of the highest standards of cleanliness and are closely working with national and local government and health authorities to ensure we are taking all the right steps," said McDonald's USA president Joe Erlinger in a letter to the public posted on the corporate website Tuesday morning.

Increasingly, states and municipalities are taking it upon themselves to institute strict limits on gatherings. Many of these restrictions generally or specifically ban restaurants and bars from operating their public dining or drinking areas.

Shares of McDonald's, a top stock for many years in the restaurant sector, closed down by 2% in trading on Tuesday, a day when the S&P 500 rose by 6%.