A growing number of legislators have been pressing for the government to send money to every American to help them through the economic turmoil of the pandemic.

The Trump administration is preparing to propose a $1 trillion stimulus package to mitigate the economic impact of the COVID-19 pandemic. And while discussions of what will be featured in his plan are still in the preliminary stages, it now appears that the president has adopted an idea that lawmakers of both parties have been pushing for: sending cash checks directly to Americans.

"We want to make sure Americans get money in their pockets quickly and small business owners have access to funds," said Treasury Secretary Steven Mnuchin. The White House also intends to ask  Congress for additional funding for the government agencies trying to fight the pandemic. 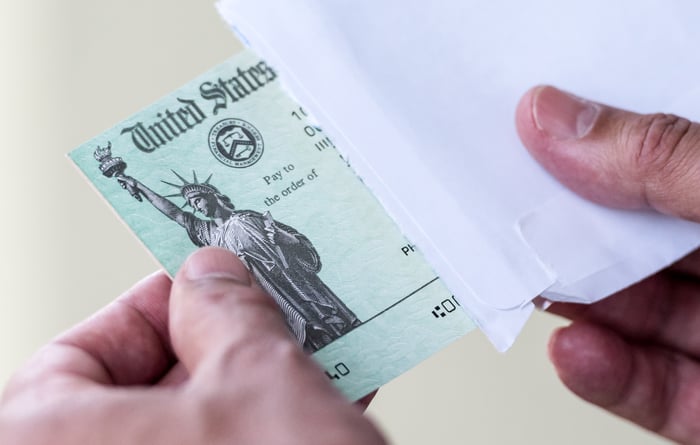 The government has already announced that it's pushing back the April 15 tax-payment deadline by another 90 days. The Internal Revenue Service will waive interest and penalties during those three months for Americans who owe up to $1 million in taxes.

The Trump administration is also proposing to spend money propping up various domestic industries that have been particularly hard hit by COVID-19. For example, he plans to ask for around $50 billion dedicated to the airline industry, which has suffered significantly as travel worldwide has plunged. Shares of United Airlines and American Airlines have fallen by around 44% and 60%, respectively, over the past month.

So far, Congress has already passed a bill that makes $8.3 billion available for a wide range of purposes directly related to the fight against the COVID-19 pandemic, from supporting vaccine and treatment development to aiding state and local health departments, buying vital medical supplies, and assisting in the international efforts to contain the disease. Another bill that would expand unemployment insurance and require that COVID-19 testing be free still awaits a vote in the Senate.