Shares of packaged-food companies and makers of cleaning products jumped on signs of strong demand.

Shares of consumer staples stocks were rising broadly today on news that Amazon was seeing unprecedented demand for essential items, and was hiring 100,000 people as a result. The e-commerce giant also said that it would shift its warehouses to stock and ship necessities like food and cleaning products since demand for those has spiked during the COVID-19 coronavirus crisis. The news comes amid reports that supermarkets are experiencing a run on goods including toilet paper and basic foods. 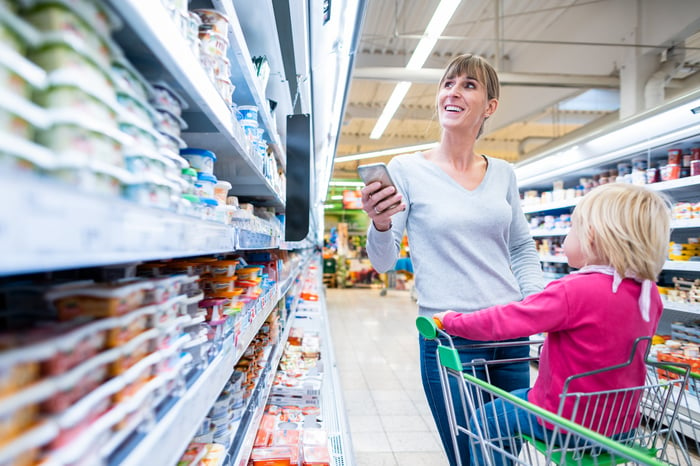 The sector was likely helped by gains in the S&P 500, which finished the session up 6%, on hopes for a massive stimulus bill. But it's clear that the current circumstances favor the consumer staples sector over others. Amazon's latest announcement, as well as reports from retail giants like Walmart and Costco, make it clear that demand for staples are soaring, which will likely lead to greater production for these companies, at least for the near term.

In addition to the urge to stockpile as Americans fear shortages and "shelter in place," consumers have largely abandoned restaurants and so will be eating more meals at home.

It's easy to see how this favors a company like General Mills. The Cheerios maker best known for its cereals also owns Yoplait yogurt, Nature Valley granola bars, and baking brands like Pillsbury and Gold Medal. Other popular brands under its umbrella include Green Giant, Haagen-Dazs, and Old El Paso.

Colgate-Palmolive doesn't sell food, but the company makes a wide range of cleaning products, which Americans are also aggressively purchasing and using during this time. In addition to its Palmolive dishwashing soap, the company also owns the Softsoap hand soap brand, Ajax, and Fabuloso, among other cleaning products. Sales of those products are likely jumping now.

Like General Mills, Kellogg is also best known for its cereals like Corn Flakes and Rice Krispies, but also owns cracker brands like Cheez-It, and veggie burger brands like Morningstar Farms and Gardenburger. With the rush for shelf-stable foods, Kellogg is likely seeing a boom.

Finally, Procter & Gamble may be the most diversified household-products maker, as it's a leader in categories like diapers, laundry detergent, and grooming. Importantly, it owns Charmin toilet paper, a product that has been in high demand in recent weeks, and Bounty paper towels. Americans may also be stocking up on things like diapers out of fear that they won't be able to get to the supermarket soon.

After their gains today, both General Mills and Kellogg are actually higher since the recent sell-off began on Feb. 24, while the S&P 500 is down 24%. Procter & Gamble and Colgate-Palmolive are only down single digits. Those results are a testament to the strength and defensive positioning of consumer staples stocks, which tend to outperform in recessions.

We'll learn more about the sector's performance tomorrow morning when General Mills reports earnings. Analysts are expecting earnings per share to fall from $0.83 to $0.76, but the key thing to watch will be guidance for the current quarter and comments about the coronavirus situation, which would likely apply to the broader sector.

Investors shouldn't expect the recent sales boom to persist once the current lockdown-style conditions are over, since toilet paper, for example, doesn't go bad. But today's rally and these stocks' overall performance during this crisis are reminders of the sector's advantages.

This Food Giant Is Doing Just Fine, Even Though Its Results Look Weak Right Now