Apple unveiled a new iPad Pro which the company is billing as its most advanced tablet to date.

Not one to rest on its laurels, even amid a pandemic, Apple (AAPL -1.80%) launched a new iPad Pro Wednesday that has 3D scanning technology built-in.

Billed as the iPhone maker's most advanced iPad Pro, the tablet runs on Apple's A12Z Bionic chip and claims to be faster and more powerful than the majority of Windows PC laptops on the market. It's also equipped with an ultrawide camera, studio-quality mics, and a LiDAR scanner that will enable users to measure the distance to surrounding objects, making it quicker to automatically calculate a person's height and measure objects. 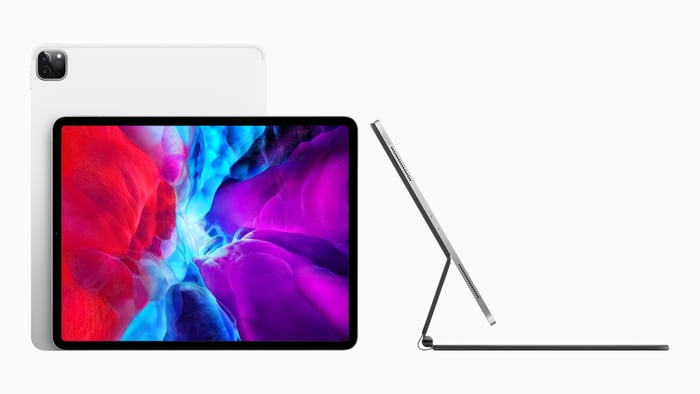 Apple said the technology will result in a whole new class of augmented reality experiences. Apple also launched a new keyboard that has a built-in trackpad, similar to what is found on laptops.

The iPad Pro will come in an 11-inch model and 12.9-inch model and will begin shipping next week. The iPad Pro 11-inch starts at $799 while the 12.9-inch  model is priced beginning at $999. The Magic Keyboard for the iPad Pro will be available in May and sell for $299 and $349 respectively, depending on the iPad size. "The new iPad Pro introduces advanced technologies never before available in mobile computing," said Phil Schiller, Apple's senior vice president of worldwide marketing in a press release announcing the new iPad.

Apple typically holds a spring event where it unveils new iPads. But with the COVID-19 outbreak rapidly spreading in the U.S. and around the globe, it settled on a press release instead. The timing of the announcement may seem suspect given the crisis but with more companies mandating employees work from home, there could be demand for the new iPad Pro.