Will slow but steady win the race?

The little guys are winning the race to develop the first vaccine against the SARS-CoV-2 coronavirus that causes COVID-19.

Moderna (MRNA -5.69%) started a phase 1 clinical trial for its coronavirus vaccine mRNA-1273 this week. Earlier this month, Inovio Pharmaceuticals (INO -5.63%) said it's finishing up preclinical testing of its INO-4800 vaccine and plans to start a clinical trial next month.

Big old Johnson & Johnson (JNJ 0.11%)? The healthcare conglomerate doesn't even have a candidate yet.

The company started working on a vaccine in January but only expects to have a candidate picked out by the end of this month, according to an interview with Johnson & Johnson's chief scientific officer, Paul Stoffels, on CNBC.

The different time frames for development likely have to do with the platforms the companies are using. Moderna uses mRNA -- the intermediary between DNA and the proteins they encode for -- that the patients' cells use to express the viral proteins needed to get an immune response. Inovio's platform uses DNA with the patients' cells doing both steps -- DNA to mRNA to protein -- to create the immune reaction.

To create their vaccines, Moderna and Inovio just needed the sequence of the virus and a good guess at which viral proteins are likely to have the best immune reaction. Work on previous coronaviruses, such as the one that causes Middle East respiratory syndrome (MERS), gave big clues as to which proteins would be most immunogenic. 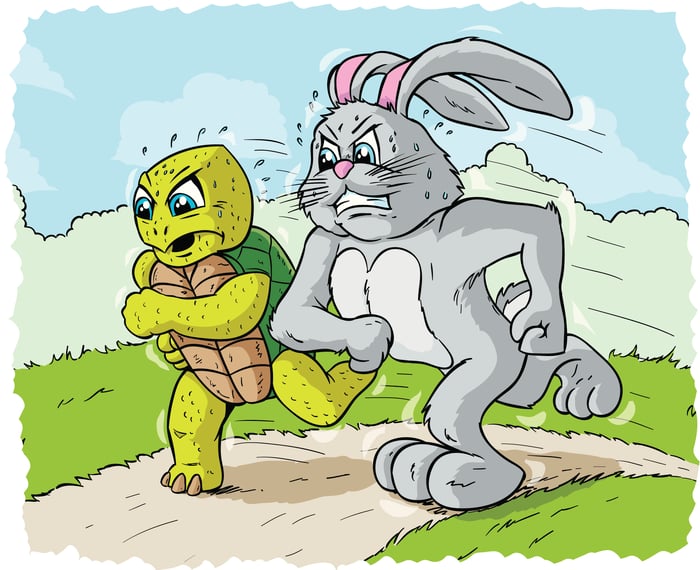 Johnson & Johnson appears to be using a more traditional approach in which the virus is inactivated so it can't replicate but can still express viral proteins. The approach takes a little longer for both the development and manufacturing scale-up steps. On the plus side, Johnson & Johnson's slow-but-steady approach could create a vaccine with a better immune response.

We'll know sometime next year whether the rabbit or the tortoise won this race.