Please ensure Javascript is enabled for purposes of website accessibility
Log In Help Join The Motley Fool
Free Article Join Over 1 Million Premium Members And Get More In-Depth Stock Guidance and Research
By Chris Neiger - Updated Mar 20, 2020 at 11:02AM

Apple is volatile right now -- and 50-year-old me doesn't care about that.

Right now it feels as if there will be no end to the volatility the market is experiencing. But history tells us that that's not true, and that eventually stock prices will stabilize, and then rise. After all, the S&P 500 has, on average, gained 7% per year in compound annual returns.

It's the simple idea that the market will eventually turn around and help investors generate wealth once again that helped me push past the investor panic and snatch up some of Apple's (AAPL 1.89%) stock last week. Why Apple? The company is well-positioned to benefit from its wearables business, and there's likely pent-up demand for a 5G iPhone. Also, I've got some time to wait for Apple's share price to bounce back. 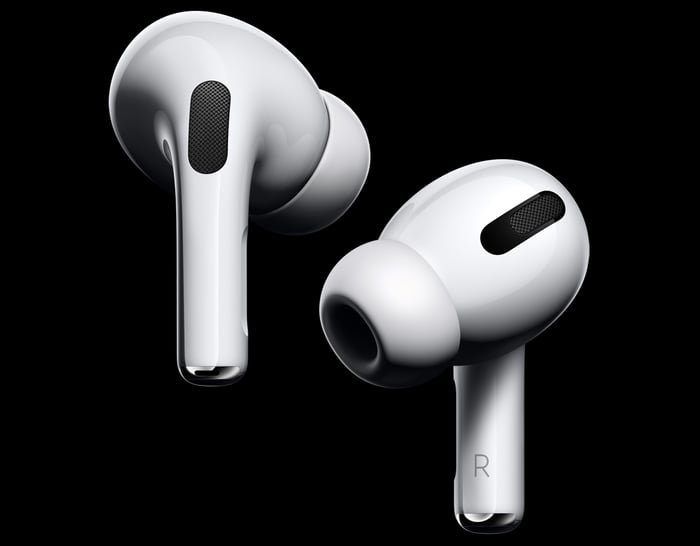 This means that Apple's wearable segment, which includes its popular AirPods, AirPods Pro, Apple Watch, and its Beats brand, accounted for about 8% of the company's total revenue in the 2019 calendar year, up from just 5% of revenue the year before.

Not only are sales growing, but the company is dominating the wearable tech market. Research from IDC shows that Apple leads its peers in both ear-worn devices and smartwatch shipments.

There's still plenty for Apple investors to be optimistic about when it comes to the iPhone. Sure, it's not going to drive the majority of Apple's growth in the future, but it's still a significant part of its business.

In the fourth quarter of 2019, Apple's smartphone market share grew to 21.3%, up from 19.7% in the year-ago quarter, according to Canalys estimates. The iPhone 11 and iPhone 11 Pro have proved to be very popular with Apple customers, and helped drive iPhone sales up 7.6% to $56 billion in Apple's fiscal first quarter.

And Apple may be sitting on even more iPhone demand. 5G, the next evolution in wireless communication, is expected to bring ultra-fast cellular wireless speeds, and will likely push many iPhone users to upgrade their devices. A 5G-enabled iPhone will likely debut sometime this fall, and some analysts have estimated that of the 900 million iPhone users out there, 200 million of them are chomping at the bit for a 5G iPhone.

Even if the coronavirus slows initial sales of a 5G-enabled iPhone, the ongoing rollout of 5G networks across the U.S. means that iPhone sales will likely benefit from the new wireless technology in the coming years.

3. My investing horizon is long

My last reason for buying Apple doesn't exactly have to do with the company per se, but rather why I'm not worried about the short-term volatility of the company's stock. I'm 38 years old right now and, though my receding hairline (thanks Dad!) reminds me I'm not as young as I once was, I hopefully still have many years ahead of me to let my investment grow.

Apple will undoubtedly face some headwinds this year as the coronavirus takes its toll on the company's supply chains. Additionally, some demand for Apple's premium devices could take a hit as economies across the globe slow down. But I'm not buying Apple's stock so that I can make money from it over the next year, or even two years. I'm keeping a 10-year-plus approach with this stock, and betting that 50-year-old me will be glad I snatched up Apple while others were selling.