Please ensure Javascript is enabled for purposes of website accessibility
Log In Help Join The Motley Fool
Free Article Join Over 1 Million Premium Members And Get More In-Depth Stock Guidance and Research
By David Haen - Updated Mar 19, 2020 at 11:46AM

With valuations cut in half, investors should consider these promising gene-editing companies.

CRISPR Therapeutics (CRSP 4.97%) and Sangamo Biosciences (SGMO 3.38%) are two leaders of a new wave of drug development that's based on manipulating genes. These biotechs use tools to remove, edit, or replace sections of the human genome. No longer science fiction, these approaches, with the potential to be curative for certain diseases, have garnered the attention of big pharmaceutical companies and investors alike.

However, the showdown between these two leaders is taking place against a backdrop of market turmoil and heightened uncertainty. 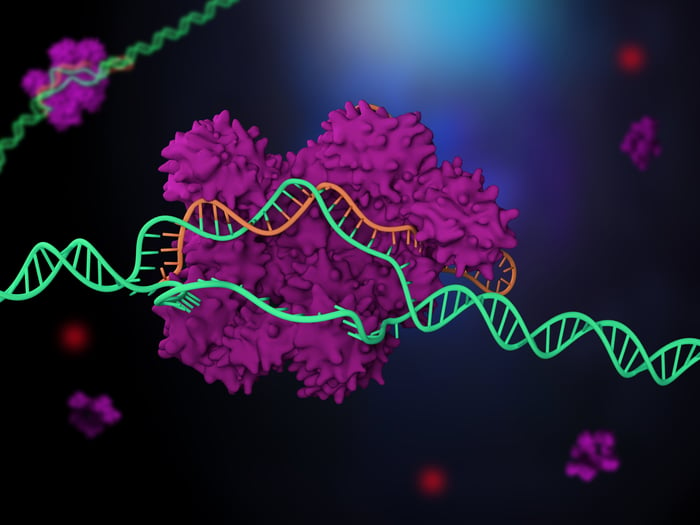 In this time, biotech investors may want to reconsider how they evaluate promising investments. Prudent investors should understand the company's cash position and burn rate (how it spends its cash). For smaller, research-and-development-stage companies, partnerships with larger biotech or pharma companies remain critically important. Lastly, as with all investments, valuation should be reviewed.

What's missing from the short list above? That's right, the biotech company's pipeline of treatments and technology. Because of the increased volatility, some investors, including certain hedge funds, ascribe no value to pipelines. Luckily, both CRISPR and Sangamo demonstrate strength in the other areas noted above.

Biotechs with more than two years of cash should be able to weather the current meltdown. Those with one to two years of cash could be considered "less safe." Those with less than one year of cash may be hit hardest. These companies will need to raise additional cash to continue operations. Investors will seek favorable terms to entice them to invest, to the detriment of existing shareholders.

Sangamo posted $385 million in cash as of Dec. 31, and it spent $144.4 million last year. Assuming the same level of spending, Sangamo has two years of cash.

Additionally, Biogen (BIIB 3.28%) entered into a collaboration agreement with Sangamo in February. Biogen will pay $125 million in cash and buy $225 million of Sangamo stock at a price of $9.2137 per share. Based on this, Sangamo should be able to ride out the current market uncertainty.

CRISPR's cash war chest weighed in at $943.8 million at the close of 2019. Like Sangamo, CRISPR spends a lot to advance its research. In 2019, that meant $179.4 million for R&D and $63.5 million for general and administrative expenses. The company's current cash position can cover 3.8 years of expenses if the burn rate stays constant from 2019. Management stated in the 10-K filing that they can "fund the operating plan through at least the next 24 months," and that's before any additional money comes in from partnerships.

Sangamo collaborates with some of the most recognized names in biotech. These include Pfizer (PFE -0.23%); Kite Pharma, now part of Gilead (GILD 0.89%); European pharma Sanofi (SNY 1.96%); Japanese pharma Takeda (TAK 0.36%); and, most recently, Biogen.

Why are partnerships meaningful? These deals can provide capital and help advance drug candidates. In many cases, smaller companies would not be able to afford R&D for several programs. These alliances can be lifelines for companies to advance more treatments.

For example, Sangamo handed off to Pfizer its promising SB-525 program to treat hemophilia A, a genetic disease causing increased bleeding. Pfizer is now on the hook for the phase 3 clinical trial, manufacturing, and commercialization. This allows Sangamo to focus on its expertise in discovery and early-stage development, and enables it to enter into new deals like the recent one with Biogen.

In November 2019, CRISPR and Vertex announced positive efficacy and safety data from tests regarding one patient with beta-thalassemia and one with sickle cell disease, both of whom received the novel gene-editing therapy CTX-001. CRISPR's stock surged following the announcement, and led to a subsequent financing round that raised $294.4 million.

The stocks of CRISPR and Sangamo have both fallen by about 50% from their peaks over the past year. Today, CRISPR trades for a little more than 2 times cash, while Sangamo trades closer to its cash balance (assuming the $350 million infusion from Biogen's partnership announced in February). Both companies offer promising gene editing therapies that can potentially be curative.

Should biotech investors view the current valuations as a gift to acquire discounted shares? Perhaps. One thing we do not know is who is doing the selling. Are Sangamo's largest shareholders -- Fidelity, Vanguard, and Wellington -- simply paring back some of their positions? Perhaps a hedge fund imploded and is indiscriminately selling. Maybe CRISPR's IPO investors seek to lock in profits. Everyday investors, and many institutional investors for that matter, do not get visibility into the causes behind a sell-off.

Investing in biotech can be a risky endeavor during "normal" market conditions. Tumultuous markets increase volatility, so it depends on an investor's timeline, risk tolerance, and portfolio construction.

In the face of the current climate, I recommend biotech investors start with small positions to which they can add more in the future. So, which is the better buy between CRISPR and Sangamo? My vote goes to Sangamo based on its valuation relative to cash, and its bevy of big-pharma and biotech partnerships.