Please ensure Javascript is enabled for purposes of website accessibility
Log In Help Join The Motley Fool
Free Article Join Over 1 Million Premium Members And Get More In-Depth Stock Guidance and Research
By Howard Smith - Mar 19, 2020 at 10:11AM

The motorcycle maker has announced the closure of most U.S. production until March 29.

Last night, Harley-Davidson (HOG 1.81%) announced that it was immediately suspending the majority of its production at U.S. plants in a proactive measure aimed at protecting the health and safety of its employees -- and aiding in the attempts to contain the spread of the COVID-19 pandemic.

The company shared that an employee at its Pilgrim Road Powertrain Operations facility in Wisconsin has tested positive for the virus. That facility was closed yesterday afternoon, and the company implemented its response protocol, including cleaning and disinfecting. 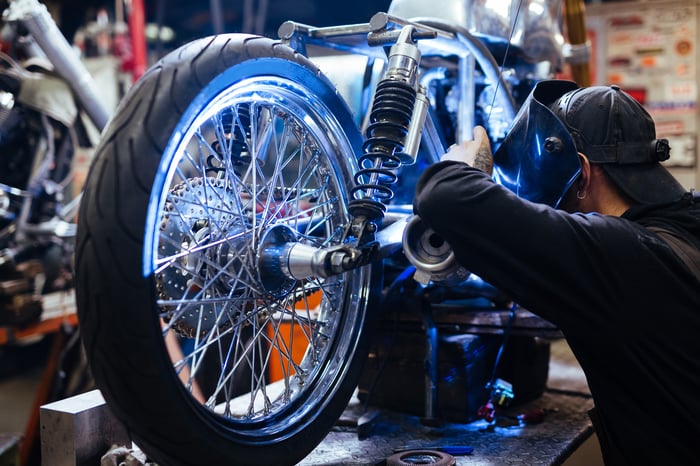 The facilities that are temporarily ceasing production are York Vehicle Operations in Pennsylvania, as well as two Wisconsin operations, including the powertrain operation where a worker tested positive.

The suspension of operations follows the company mandate on Monday that workers at its Milwaukee-area headquarters and Product Development Center work remotely through at least the end of March, when possible.

These decisions come under the leadership of acting President and CEO, Jochen Zeitz. Zeitz, a member of the Board of Directors, was named to the new position on February 28, 2020, when then-President and CEO, Matthew Levatich, stepped down. Levatich also stepped down from his role on the Board, but is assisting with the transition through the month of March. Zeitz was also named as Chairman of the Board at part of the leadership change, and will remain Chairman once a full time CEO is named.

Yesterday's announcement comes at a time when domestic automakers are also announcing temporary production stoppages. With production halted, the company said its U.S. production employees that are on temporary layoff will continue to receive medical benefits.