Please ensure Javascript is enabled for purposes of website accessibility
Log In Help Join The Motley Fool
Free Article Join Over 1 Million Premium Members And Get More In-Depth Stock Guidance and Research
By Daniel B. Kline - Mar 19, 2020 at 7:40AM

It's going to be an ugly period for theater companies and movie studios as people avoid crowds.

In 2019, Walt Disney's (DIS -0.70%) Captain Marvel led the domestic box office in March to $962.7 million in overall ticket sales, up 8.5% from the previous year, according to data from Box Office Mojo. April was an even bigger month with the release of Avengers: Endgame, another Disney blockbuster, pushing sales to just over $1 billion for that month.

Those sales totals won't be equaled or even approached this March or April as customers self-isolate and practice social distancing to slow the spread of the novel coronavirus that causes COVID-19. A number of films simply won't be released during March and April (and maybe longer), while the ones that do will not perform up to the usual expectations. 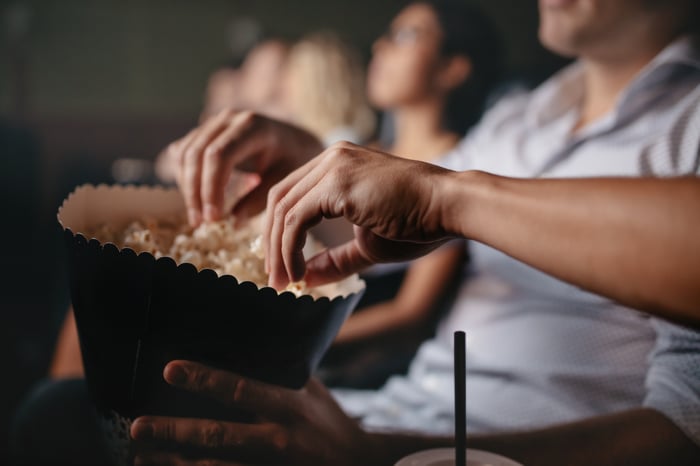 Most people are simply not going to the movies. Image source: Getty Images.

Most, maybe all, potential blockbuster releases scheduled through the end of April have been delayed. That includes Comcast's (CMCSA -0.02%) Universal Studios releases of No Time to Die and F9, Disney's Mulan, as well as ViacomCBS's (NASDAQ: VIAC) (VIAC.A 1.19%) Paramount Pictures release of A Quiet Place Part 2.

Disney was not able to postpone the release of its latest Pixar movie, Onward. That film had a domestic opening weekend of just under $40 million, and it has taken in $101 million globally in about two weeks of release. That seems decent, but it's much worse than how Pixar films normally perform.

"Toy Story 4 opened to $121 million last year, and Incredibles 2 raised the bar to $183 million the year before that," my colleague Rick Munarriz recently wrote. He pointed out that Onward was only $10 million below Coco, the previous non-sequel Pixar release.

He's right, but the film dropped by nearly 75% in its second weekend. That's not a function of lack of interest in the movie; it's because people stayed home.

Through the first half of March, films have taken in roughly $248 million, but only about $50 million of that came from this weekend. That's the lowest theaters have taken in in nearly 20 years. With new releases being pulled, AMC and Regal closing all of their theaters, and people generally staying home, it seems likely the numbers may get worse, leaving March and April (and maybe longer) performing down dramatically compared to previous years.

Theaters, of course, not only loose ticket sales, but they'll also lose concession sales. It's hard to see any silver lining, here. For weeks, maybe months, the movie business basically does not exist.

Last week's $50 million week at the box office may end up looking like a high number over the next few weeks. Even if that number proves to be the bottom, the industry will have lost roughly $600 million in ticket sales in March and $800 million in April.

The only silver lining is that while production has slowed or shut down for some new releases, many movies that would have been released between now and ... whenever normalcy returns have already been filmed. That means when theaters do reopen for business, they'll have the normal lineup of summer blockbusters (assuming they all get finished) and a deep roster of films that didn't come out in March, April, and maybe even May, depending upon how long this lasts.

For the industry, though, it's going to get very dark before there's any recovery. Some theaters and maybe even some chains may not make it through to the other side.