Please ensure Javascript is enabled for purposes of website accessibility
Log In Help Join The Motley Fool
Free Article Join Over 1 Million Premium Members And Get More In-Depth Stock Guidance and Research
By Jennifer Saibil - Mar 20, 2020 at 10:45AM

You can find value in the sporting industry even in a market sell-off.

With people across the globe munching snacks on their sofas and glued to their home screens, for work or for coronavirus updates, does anyone even need to buy new sneakers?

Sports organizations have shut down their seasons, and amateur players are avoiding person-to-person contact. (Tennis, anyone?) What does that mean for companies that work in athletics? Not such good news, at least for the short term. But that doesn't mean they're a lost cause.

For new investors who've been waiting for an opportunity to get their hands on hot stocks but have been put off by sky-high pricing, the time is now. Here are three sports stocks that are worthwhile investments for the long term. 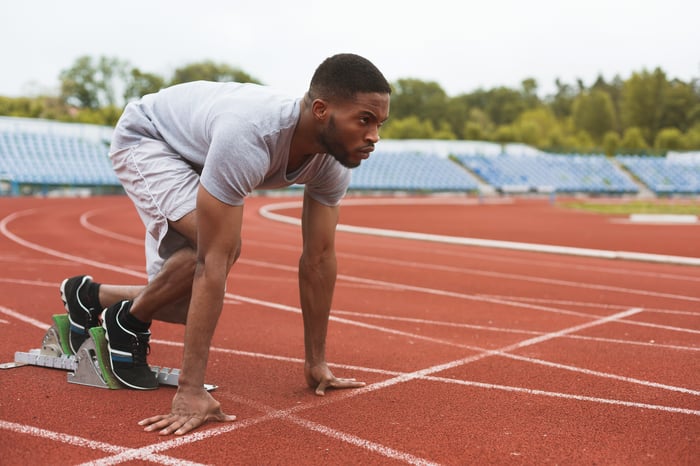 Nike (NKE -0.86%) has had the honor of being the leader of the pack for perhaps its entire existence, but recently, it's been at the top of its game. Digital sales increased 35% in fiscal 2019 and 38% year over year in the recent second quarter of 2020. Full-year total revenue was up 7%, and second-quarter revenue increased 10%.

In a prophetic move, Nike cut ties with Amazon in November and increased its direct selling business, which has been growing stronger since then. The Nike and SNKRS app made up about a third of total digital revenue in the second quarter, and members are growing at an almost triple-digit pace.

Nike stock returned a very respectable 30% in 2019, and it has delivered value to its shareholders over decades through increasing dividends and as well. Its share price is down to its pre-2019 opening price, which makes this slump a chance to buy a temporarily cheap company that should come back strong after the economy stabilizes.

As of March 15, most Nike global stores are closed, but the Nike and SNKRS apps are humming along, and with the company's digital power, it's likely to stay in the game.

lululemon athletica (LULU -0.57%) was kind of an overnight star, soaring 91% in 2019 with the rise in popularity of athleisure. But it's not just general retail trends that are pushing up the Vancouver-based activewear brand's value.

Lululemon has its eye on what customers want and has seen exponential growth in almost all categories, with more than 30% growth in mens, digital, and international in each of the first three quarters of 2019. It's also well-managed, with increasing gross margin rates.

The company announced store closures on March 15, but with a healthy digital presence, it should still see sales. And the gym-addicted populations it appeals to won't be content to sit out completely for the duration of sports shutdowns; they'll be doing yoga in their living rooms and running on home treadmills, so there's hope for sales over the next few weeks.

Anyone with a Peloton (PTON -5.48%) bike or treadmill will get a lot of use out of them while they wait out home quarantine. While Peloton has closed all of its retail stores, you can purchase all of its hardware and sign up for its classes online, and that might be the big break the company's been needing to get noticed and increase share price.

With a four-figure price tag, Peloton's hardware may not be right for every budget, but those who can afford it usually stick with the premium pricing model for classes, giving the company a 93% 12-month retention rate and creating a stable ecosystem with cash flow for the company. It saw 96% growth in connected fitness subscribers in the second quarter and a whopping 77% increase in revenue.

The share price hasn't totally followed suit, but it's been holding fairly steady through the market downturn and shouldn't see too much damage considering its platform.

While investors nearing retirement need to weigh their options more carefully, for investors just starting out, now is a great time to find companies that present solid business models and healthy growth prospects. These top picks will return value in the long term.

Jennifer Saibil has no position in any of the stocks mentioned. The Motley Fool owns shares of and recommends Lululemon Athletica, Nike, and Peloton Interactive. The Motley Fool has a disclosure policy.