The company expects to produce around 20 million tablets within a month.

Amneal Pharmaceuticals (AMRX 1.62%) announced on Friday that it would be ramping up production of its malaria drug, hydroxychloroquine sulfate, for potential use in treating COVID-19 patient symptoms. The company estimates that it will be able to manufacture around 20 million tablets of the drug in a month's time.

Hydroxychloroquine sulfate is a malaria drug first created back in 1946. Since then, its been approved by the U.S. Food and Drug Administration (FDA) to treat a number of other conditions, including rheumatoid arthritis, lupus, and a variety of autoimmune diseases. The U.S. government has asked Amneal to make sure adequate supplies of the drug are prepared, with President Trump touting the drug's potential as a potential treatment for COVID-19. 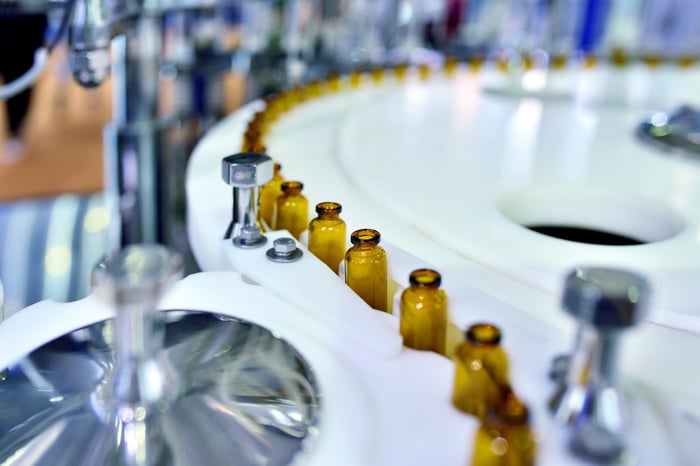 "This is a critical time in the fight against COVID-19. With our existing supply of hydroxychloroquine sulfate, and the ability to fast-track production, Amneal is well-positioned to help meet the potential demand for patients in need," said co-CEOs Chirag and Chintu Patel in an official statement from the company.

Responses from other companies

Amneal isn't the only pharmaceutical company that's manufacturing the drug. Mylan announced yesterday that it would be restarting its production of hydroxychloroquine sulfate in its West Virginia manufacturing facility, also for the purpose of fighting COVID-19. The company plans to have around 50 million tablets produced by mid-April.

Chinese officials had previously recommended a variant of the drug, chloroquine, back in February after it had seen encouraging results from patients. However, another study showed that chloroquine is capable of killing an adult if accidentally given twice the recommended dosage, which is just one gram.