Tracking down potential vaccines and treatments is right up this AI-supercomputer's alley.

International Business Machines (IBM 2.62%) is taking the fight to COVID-19.

The company has deployed Summit, considered to be "the world's most powerful and smartest scientific supercomputer," to gain ground on the outbreak that spread around the globe at unprecedented speed. Summit, which is equipped with artificial intelligence (AI), was commissioned by the U.S. Department of Energy and is used to address some of the world's most pressing problems.

The supercomputer's cutting-edge technology was tasked to run the thousands of simulations necessary in order to identify drugs that might be effective in combating the SARS-CoV-2 virus that caused the COVID-19 pandemic. 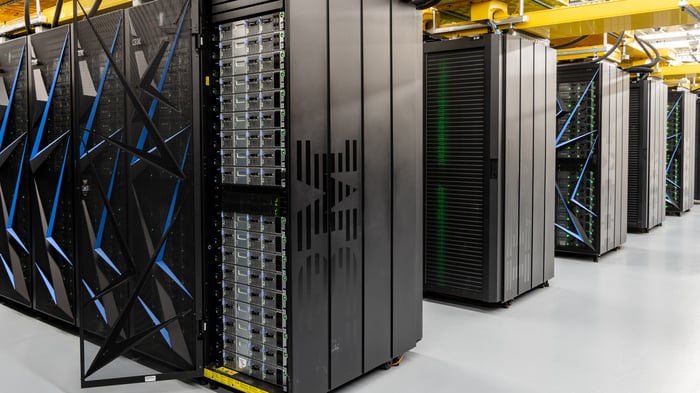 In a blog post, IBM explained that a virus uses a "spike" to inject genetic material, thus infecting a healthy cell. To speed up research, Summit ran simulations on more than 8,000 compounds to determine which would most likely attach to the spike, limiting the ability of coronavirus to "infect host cells." Summit identified 77 promising drugs that fit the bill. The simulations are being run a second-time to confirm the findings. Researchers will then begin experiments to determine if any of the likely candidates will ultimately result in a coronavirus vaccine or treatment.

The supercomputer is massive. It boasts 4,608 servers, each containing two central processors and six NVIDIA (NVDA 5.55%) Tesla graphics processing units -- totaling more than 27,000 in all. It contains over 185 miles of fiber optic cables, and the supercomputer could fill two tennis courts. It weighs in at over 340 tons -- more than commercial aircraft. It can run 200 quadrillion calculations per second, meaning it's about 1 million times more powerful than a high-end laptop and uses 4,000 gallons of water per minute to keep in from overheating.