Please ensure Javascript is enabled for purposes of website accessibility
Log In Help Join The Motley Fool
Free Article Join Over 1 Million Premium Members And Get More In-Depth Stock Guidance and Research
By Adria Cimino - Mar 20, 2020 at 8:22AM

As the coronavirus pandemic deepens, the news gets worse for Nike -- but the pain should be temporary.

As the coronavirus outbreak expands worldwide, the news is getting worse and worse for Nike (NKE -1.02%). The athletic-wear giant in February temporarily closed about half of its stores in China, where the current health crisis began at the start of the year. Then came the worldwide halt to sporting events, which represent advertising and sponsorship deals for the company.

Nike this week announced the shutdown of its stores in the U.S., Canada, western Europe, Australia, and New Zealand through March 27 as COVID-19 cases reached more than 200,000 worldwide. And the latest blow to Nike is the postponing of this summer's Euro 2020 soccer championship until next year. Amid the turmoil, Nike shares have lost 35% this year. 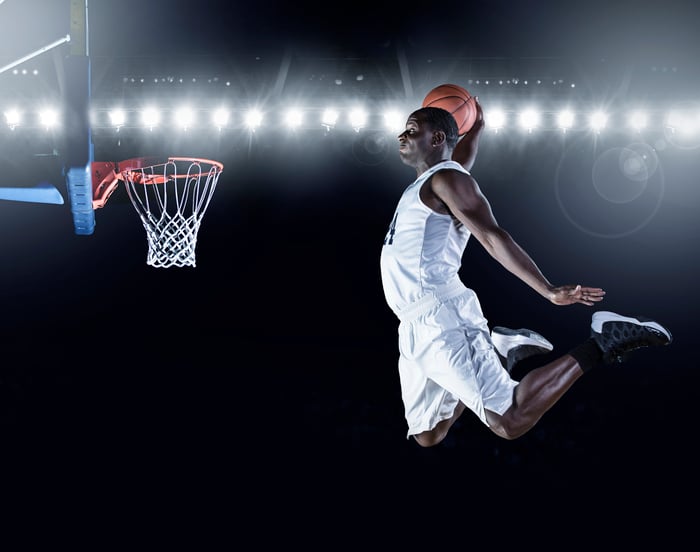 Though the situation may sound dire, the worst mistake Nike investors can make right now is to focus on near-term revenue and earnings. It's clear Nike will take a hit. Before the coronavirus outbreak spread beyond China, the company predicted the situation would have a "material impact" on its business in the country. Now that the outbreak has become a pandemic, we should expect impact on Nike's business around the world due to the temporary shutdown of stores, less traffic in stores that remain open, and the cancellation or long-term delay of sports events. Nike is set to report fiscal 2020 third-quarter earnings on March 24, and the company may offer an update then.

In the meantime, a Reuters report offers a few clues about what may happen in the next few months. Cowen expects Nike's fourth-quarter sales to fall by 34%, resulting in a $0.04-a-share loss in the wake of coronavirus disturbances, according to the wire service. The last time Nike posted a quarterly loss per share was in the third quarter of the 2018 fiscal year.

While store closures lead to an obvious drop in revenue, the cancellation of sports events intensifies the problem. For instance, in Nike's last earnings call, the company said it was preparing new product introductions for the Euro 2020 soccer event and that the championship would be a catalyst for apparel sales in Europe, the Middle East, and Africa. Since this event and many others have now been postponed, Nike loses the opportunity to promote itself through classic advertisements as well as through its position as uniform provider for leagues such as the NBA.

With all this recent bad news, the best thing Nike investors can do at the moment is hold on to the shares and look ahead -- beyond the point when the impact of the coronavirus outbreak will show in Nike's earnings reports. Prior to the coronavirus outbreak, the company beat analysts' earnings forecasts for three out of the past four quarters, Nike's Jordan brand posted its first billion-dollar quarter, and the company's direct-to-consumer and online efforts gained. In the second quarter, Nike said Nike Direct -- sales made directly to consumers via a Nike platform -- grew 17% while Nike Digital sales jumped 38%. Nike's book value has been on the rise for the past year, while over the past few weeks, the share price in relation to the value of the company's assets has plunged.

The pain likely isn't over for Nike investors, as earnings season will reveal just how badly recent news has hurt sales. But considering the company's financial performance prior to the coronavirus outbreak and future opportunities for growth through online and direct-to-consumer efforts as well as its leadership position serving professional sports teams, I consider the current woes temporary. Upside for Nike shares might not be right around the corner, but it is down the road for this consumer discretionary stock.