Please ensure Javascript is enabled for purposes of website accessibility
Log In Help Join The Motley Fool
Free Article Join Over 1 Million Premium Members And Get More In-Depth Stock Guidance and Research
By Rekha Khandelwal - Mar 20, 2020 at 9:03AM

The decline has made the pipeline operator's yield more attractive.

After the recent drop in oil prices, it's more important than ever to select energy stocks with caution. Companies that have less direct exposure to commodity prices are likely to perform better in periods of volatile commodity pricing.

One such company is Kinder Morgan (KMI 1.13%). It's managed to grow its earnings over the years and can continue to do so because it's far stronger than it was in 2014.

The biggest current concern of energy investors is the impact of a steep drop in oil prices on stocks. Kinder Morgan stands comparatively better here compared to energy companies with upstream operations or ones with greater oil exposure  . The company expects that every $1 drop in the price of WTI crude will reduce  its 2020 budgeted distributable cash flow (DCF) by $5 million.

To put that in context, the company expects $2.2 billion in excess DCF for 2020 after paying dividends, which are expected to rise by 25% for the year. So a drop in oil prices doesn't look likely to affect Kinder Morgan's 2020 dividend. 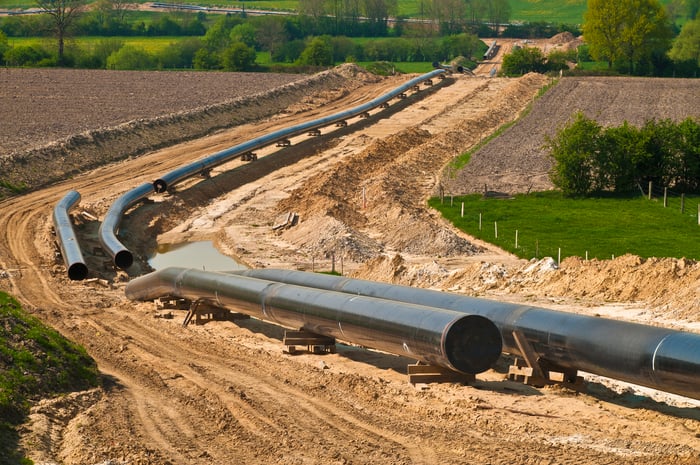 The key positive about Kinder Morgan's cash flows are that a significant portion of these are backed by long-term take-or-pay  contracts. Such contracts require the customer to either use the committed transport or storage capacity or pay a penalty for unused capacity. For example, 64% of the company's 2020 budgeted cash flows are from take-or-pay contracts. Another 27% of the cash flows are from fee-based contracts supported by stable volumes, and 5% of the cash flows are hedged. All of these  contracts allow Kinder Morgan to grow earnings even when commodity prices are volatile, as happened in 2019. Despite weaker prices for natural gas liquids, the company's earnings for the year grew over 2018, driven by higher natural gas pipeline volumes and growth projects. 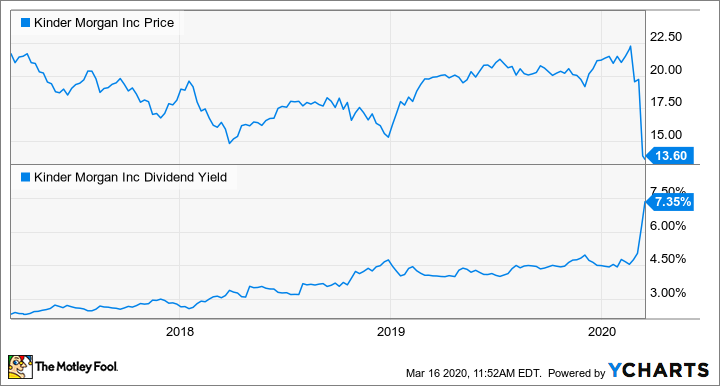 So far, so good. But as drilling activity drops, the volumes on Kinder Morgan's pipelines may ultimately be affected. This is a very real possibility. Still, the company has come a long way in reducing its leverage from 2014, when high debt levels forced it to slash dividends. The company's ratio of net debt to adjusted EBITDA stood at 4.3 times at the end of 2019, which is in line with what midstream companies usually target.

Kinder Morgan is committed to maintain its financial flexibility and does not intend to pursue projects if they don't meet its return criteria. While this may slow down growth in the near term, the company seems to have the wiggle room to adjust in the new environment, while keeping its dividend intact.

Kinder Morgan is growing earnings steadily, supported by strong growth in natural gas pipeline volumes. Rising natural gas production has benefited the company, and the production is expected to rise in the long term. Overall, Kinder Morgan's yield has become more attractive after the stock's recent fall in the coronavirus sell-off.