Please ensure Javascript is enabled for purposes of website accessibility
Log In Help Join The Motley Fool
Free Article Join Over 1 Million Premium Members And Get More In-Depth Stock Guidance and Research
By Catherine Brock - Mar 21, 2020 at 6:15AM

Working with a financial advisor isn't always a great idea.

I should have known things would go sideways when I saw my stockbroker playing a bit part on prime-time TV. That's when I learned he had two jobs -- stockbroker by day, and actor, also by day. To be fair, he did have a partner at the brokerage firm, who was probably the brains behind the financial recommendations. In hindsight, I'm guessing the actor's role was limited to wooing new clients -- in between auditions, of course.

I came to this actor-advisor team on a recommendation from a friend. I hoped they'd take over my savings and work some magic. Logically, I assumed they had more time, resources, and expertise than I did. Plus, they talked a good game. They were stock pickers, and they had a proven process. I was assured that they wouldn't get greedy or sloppy; they'd take profits at 20% growth and also cap losses at 20%. They also had a fancy office, and produced charts and projections that were bound, printed on thick paper, and very official-looking. 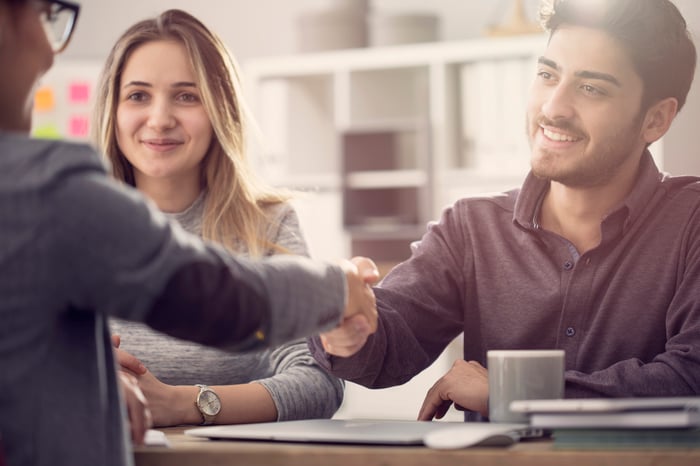 I signed on the dotted line to transfer my savings, and they got to work. In the first year, they sold off older assets and incurred an enormous taxable gain. I had to pull money out to pay the taxes. In the second year, they sold my husband and me two life insurance policies, each. And the third year, well, that was 2008 -- the year I finally dove into what, exactly, was happening with our savings. It was July, before the big crash, when I compared our performance with that of the market. The market was down, but we were down quite a bit more. On top of that, I was sitting on unrealized losses in certain positions that were greater than 20%, something they told me wouldn't happen.

When I questioned the account performance, I got a lot of words in response: "We mistimed this one," and "That one's coming back," and "The market is challenging right now." Maybe some of those explanations were valid. But here's the thing I couldn't get past. I was paying them a management fee and my investments were showing below-market returns. In my mind, that translates to paying someone to gamble and lose my money. And when I asked them to justify their strategy versus plain, old index funds, they didn't have a good answer.

I ended the relationship by moving the assets to a self-managed account. I kept the blue-chip dividend payers, sold their speculative picks, and invested the proceeds in index funds. In the end, I don't think these guys were bad at their jobs. I do think they were a bad match for me, and that's why the relationship failed.

The right advisor can add value

Not everyone needs a financial advisor. If you're primarily investing in your 401(k), for example, and you're happy with your contribution rate and fund selections, an advisor won't have much insight to add.

In more complex situations, though, the right financial advisors do add value. If you have several accounts, advisors can help you structure your investments properly to balance risk and return. They can work with you to plan for future financial goals, like college education for your kids, your own retirement, or both. And they can help you manage the financial implications of major life transitions, like divorce. That expertise can spare you from costly missteps -- but only when you and that advisor are on the same page.

Being "on the same page," means you and the advisor have a shared understanding of your goals and expectations. I mistakenly took this for granted. As an example, my twin daughters were in high school when I was working with the actor-advisor team. But we never discussed college tuition. Turns out, my advisors had assumed the kids were getting scholarships -- apparently, an unintended consequence of my parental bragging about their athletic prowess.

The point is, don't leave anything open to interpretation. Have all of your financial goals clear in your own mind before you meet with an advisor. Then talk through each goal in depth, one by one. And don't hold back. Tell your advisor about your secret wish to buy a boat, open a business, or invest in your cousin's body shop. If you don't feel comfortable sharing, you're not working with the right person.

Accept the strategy, and then keep watch

When you work with an advisor, you have to accept the strategy and all of its implications. In my case, I accepted stock picking as a strategy, but later realized I wasn't happy with the implications -- the churn, the tax implications, and the risk of performing worse than the market. Think about what you can tolerate and what you can't, and make sure your advisor knows your limits.

Once you're on board, hold your advisor accountable for following the strategy. If something doesn't seem right, speak up. I let my advisors work without oversight, blindly accepting their recommendations and not paying attention to my monthly statements. When I did dig into the numbers, I was surprised to learn things weren't being managed as I'd expected. That's not a surprise anyone wants. Avoid it by paying attention and asking questions.

The second time around

I managed my own investments for years, and then went back to working with an advisor just last year. This time, I interviewed multiple candidates. The advisor I chose is easy to talk to and has an investment strategy I can understand. He doesn't speculate or time the market. He buys and holds, and only recommends companies and funds he follows closely. It's not exciting, but it is logical -- and that suits me just fine.

And, as far as I know, my original advisor's acting career never took off. Hopefully he did better in the stock market.