Please ensure Javascript is enabled for purposes of website accessibility
Log In Help Join The Motley Fool
Free Article Join Over 1 Million Premium Members And Get More In-Depth Stock Guidance and Research
By Reuben Gregg Brewer - Mar 21, 2020 at 11:03AM

Marijuana stocks are struggling to make their business models work, but this industry supplier is in increasingly solid shape.

Marijuana is a growth industry with huge potential as it gets legalized in more and more U.S. states and countries around the world. However, as Wall Street is prone to do, investors got a little ahead of themselves on the investment front, bidding growers up to unsustainable heights.

One supplier, however, has managed to build a real pot-related business that should hold up well through the emerging sector's ups and downs. And, more important, it has managed to address the biggest problem it was facing. Here's a quick primer on how this marijuana stock is standing out from the pack.

Getting into the business

At first blush, Scotts Miracle-Gro (SMG 1.29%) isn't going to ring any marijuana bells. That's because it is one of the largest lawn care companies in the United States. Its namesake brands, and many others, are key staples in home improvement stores around the country. This is a slow-growth business that is highly seasonal. It is also the core of Scotts' top and bottom lines, accounting for roughly 70% of revenue and 90% of segment profits in fiscal 2019. 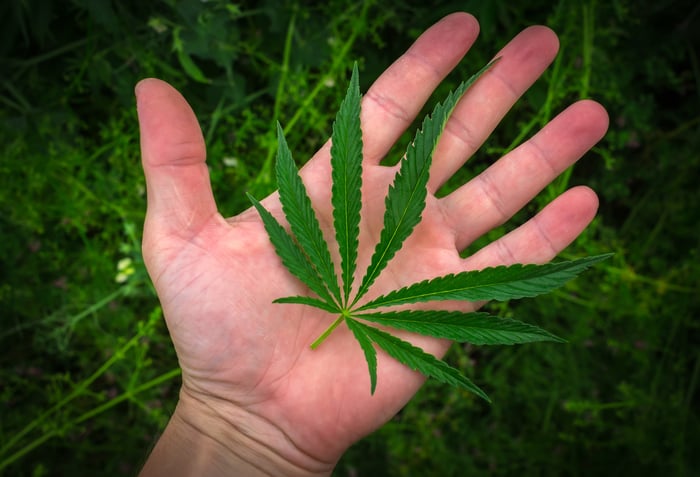 A few years ago, however, Scotts realized that it had an opportunity to use this highly reliable business as the foundation on which it could build a faster-growing one. It wasn't looking to extend itself into a vastly new industry -- it was eyeing one that was similar enough to its core operations that it made logical sense to take the risk of entering what was essentially a new market. The opportunity, meanwhile, was just beginning, and staking out an early position was likely to be a key determinant of long-term success.

That industry, as you've probably guessed, was marijuana, which some industry watchers think will grow to be a $2.6 trillion sector. The differentiating factor here is that Scotts never wanted to grow pot; it simply wants to be the supplier of choice for hydroponic gear via its recently constructed Hawthorne division. Although a relatively small contributor today, at just 10% of segment profits in fiscal 2019, it is growing fast, with sales in the division advancing 95% during fiscal year 2019. To be fair, that's an unsustainable growth rate driven by acquisitions (more on this in a second). Fiscal 2020 provides a better look at the opportunity here, with Hawthorne projected to grow revenue by 12% to 15% compared to the 1% to 3% advance expected in the core lawn care segment.

It takes money to make money

So Scotts appears to have chosen a solid expansion opportunity that sits close enough to its core that it makes complete sense for the company's overall business. And, equally important, Scotts is positioned as a supplier, which means that it sells to anyone who needs hydroponic equipment, whether they are growing it legally or not. (Legal marijuna hasn't destroyed the illegal variety because taxation makes it cheaper for consumers to keep buying on the black market.) The problem here is that Scotts didn't have any exposure to this business when it started out.

Instead of trying to build from the ground up, which could have taken years, it used acquisitions to quickly achieve scale in the niche industry. That meant spending a lot of money buying other businesses. The impact on the company's balance sheet was material, with long-term debt going from roughly $440 million in fiscal 2010 to nearly $1.9 billion by the end of 2019. Its debt load peaked in the first quarter of fiscal 2019 at roughly $2.1 billion. Lawn care is seasonal, so the company's debt load varies through the year and tends to be higher in the first quarter. However, the big picture is that building Hawthorne led to a notable increase in leverage.

Looking at that a different way, by the first quarter of fiscal 2019 Scotts' financial debt to EBITDA ratio spiked above 7.5 times, and its interest coverage plummeted below 3 times. Both ratios were wildly out of line with the company's historical trends. It was building a very real business in the marijuana space, but the cost was materially weakening the balance sheet. 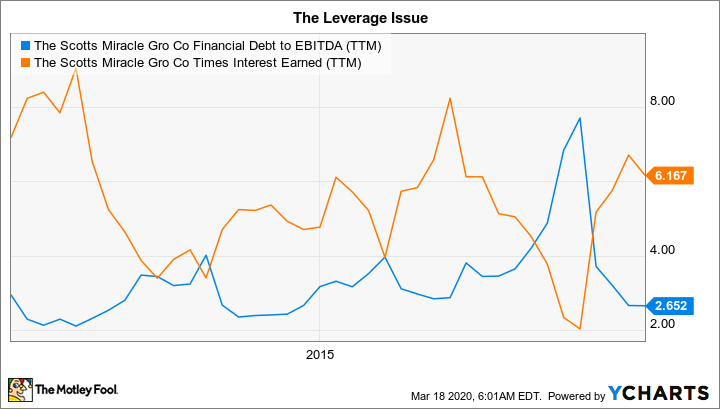 Investors were displeased, pushing shares lower throughout calendar year 2018. Management was basically put on notice that it needed to do something to fix the trend. The answer was pretty simple: Mend the balance sheet, which quickly became a priority. As the chart above shows, Scotts has gotten its leverage back in line with historical trends, and it is again soundly covering its interest expenses. The big push was selling a non-core lawn care business, helping to quickly reduce its long-term debt obligations.

Long-term debt stood at roughly $1.5 billion at the end of fiscal 2019, down about 20% year-over-year. The fiscal first-quarter tally for long term debt, which tends to be a seasonally high number, was roughly $2 billion, lower by 10% year-over-year. This, coupled with a low interest rate environment, has materially improved Scotts' financial strength. Investors took notice of the change, pushing the stock higher in 2019 while the stocks of marijuana growers struggled as investors started to realize that the "marijuana story" was better than the industry reality.

It wouldn't be realistic to suggest that Scotts Miracle-Gro is super cheap today, but the broader stock market's COVID-19 volatility has changed the valuation equation a bit. Scotts' price to sales ratio is now below its five-year average and, at times, right around its seven-year average. Add in the notable improvement on the leverage front, and there's a lot to like here. So if you are willing to pay a fair price for a solid company with a growth catalyst, then Scotts is worth a deep dive today. Even better, it sells vital products in both of its core sectors -- hydroponic supplies have to be purchased if you are growing weed hydroponically, and lawn care really isn't optional, unless you like brown grass.