Please ensure Javascript is enabled for purposes of website accessibility
Log In Help Join The Motley Fool
Free Article Join Over 1 Million Premium Members And Get More In-Depth Stock Guidance and Research
By Evan Niu, CFA - Mar 21, 2020 at 8:00AM

I wouldn't want to manage a sprawling multinational corporation during a global public health crisis, either.

Disney (DIS -4.18%) surprised investors last month when it announced that Bob Iger was prematurely stepping down as CEO. The company named Bob Chapek, who was most recently in charge of the Disney Parks business, as Iger's successor. Iger had previously said he would retire at the end of 2021 following a wildly successful tenure that transformed the company into an even larger entertainment powerhouse following the blockbuster acquisitions of Pixar, Marvel, and Lucasfilm.

With the benefit of hindsight, the novel coronavirus outbreak could very well be the reason why Iger called it quits. 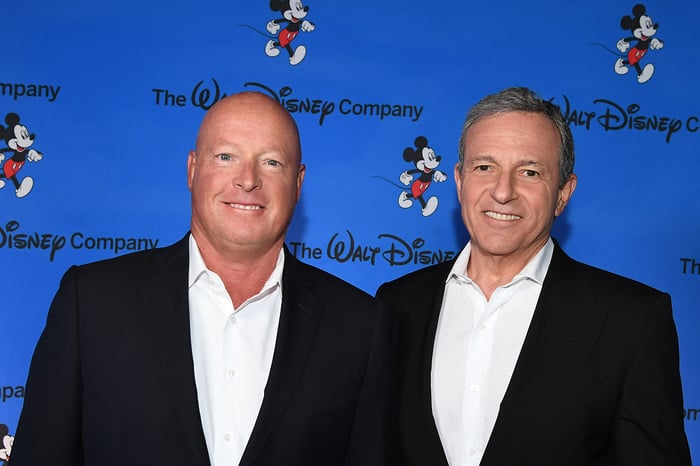 All the ways Disney is getting hit

In a regulatory filing last week, Disney provided deeper insight into how the ongoing COVID-19 pandemic was impacting its business. Almost all aspects of the company's sprawling business -- most notably theme parks but also including movie distribution and production and more -- are feeling the effects of the outbreak. Remember that Disney also operates cruise lines and the global travel industry is getting utterly demolished.

The impact of the novel coronavirus ("COVID-19") and measures to prevent its spread are affecting our businesses in a number of ways. We have closed our theme parks; suspended our cruises and theatrical shows; delayed theatrical distribution of films both domestically and internationally; and experienced supply chain disruption and ad sales impacts. In addition there has been a disruption in creation and availability of content we rely on for our various distribution paths, including most significantly the cancellation of certain sports events and the shutting down of production of most film and television content.

Disney isn't quite sure how bad things will get because the situation continues to evolve so rapidly, but also warned that chaos in financial markets may impact the company's cost of borrowing. The theme park segment is burdened with very high levels of fixed costs.

Above Avalon independent analyst Neil Cybart has suggested on social media that Iger's abrupt resignation was ultimately related to the coronavirus:

It is now clear that Bob Iger's surprise resignation as Disney CEO was related to coronavirus. He stepped down on February 25th. Disney had already seen the coronavirus impact in China. They knew Japan was next.

It's worth revisiting the outbreak's timeline. The first cases were reported in China in December, with China's first fatality occurring in January. The World Health Organization (WHO) declared a global health emergency on Jan. 30, and the first case outside of China was reported on Feb. 2. As a massive multinational corporation with operations throughout Asia -- including theme parks in China -- Iger was well aware of deteriorating conditions on the ground.

The former chief executive discussed the potential impacts at length on Disney's earnings call in early February, which included CFO Christine McCarthy estimating that operating income would take a hit of around $280 million due to park closures.

With one foot already out the door, can anyone blame Iger for not wanting to manage Disney during an unprecedented crisis of this scale?