Please ensure Javascript is enabled for purposes of website accessibility
Log In Help Join The Motley Fool
Free Article Join Over 1 Million Premium Members And Get More In-Depth Stock Guidance and Research
By Adria Cimino - Mar 23, 2020 at 10:21AM

Economic data, earnings reports, and any progress on coronavirus treatments could offer the market direction this week.

Shares sank further into bear market territory last week as the number of coronavirus cases worldwide reached 234,000 and the crisis deepened in the U.S.

As cases reached more than 10,400 in the U.S., the governors of California and New York urged residents to stay at home. The Dow Jones Industrial Average lost 17% for the week, reaching its lowest level since December 2016. The S&P 500 ended the week down 15%. 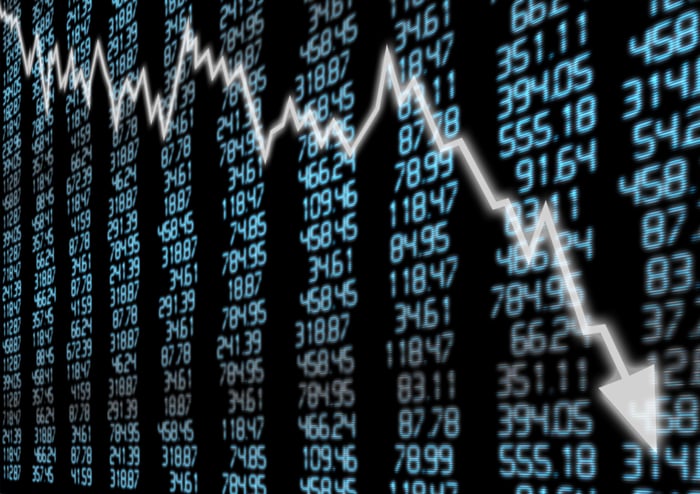 Here are three points to watch in the coronavirus bear market this week.

The government has already passed an $8 billion emergency bill for coronavirus prevention, and a second package to cover paid sick leave and broaden unemployment benefits. Now, Senate Democrats have blocked the Senate Republicans' efforts to pass a $1 trillion economic stimulus plan as the next phase of assistance.

House Speaker Nancy Pelosi and Senate Democratic Leader Chuck Schumer, after an initial review of this latest plan, released a statement saying it "puts corporations way ahead of workers." Negotiations are continuing to strike a compromise and market watchers are hoping a bipartisan solution for a stimulus is reached. The broader market slid at the open Monday after the weekend's news of Democrats blocking the vote.

Investors should monitor further comments and decisions as the fate of this additional government assistance may offer new direction for stocks and investors. More insight for the market may come from Thursday's jobless claims report. Moody's Analytics research showed that more than half of jobs in the U.S. economy are at risk due to the current crisis, CNN reported.

2. Earnings from Nike and Lululemon

Nike (NKE 0.46%) and Lululemon Athletica (LULU 1.59%) are both expected to report quarterly earnings on March 24 and March 26, respectively. The reports will offer a first glimpse of the coronavirus oubreak's impact on companies.

In February, when the crisis was unfolding mainly in China, Nike said the situation would have "material impact" on its operations in the country and said it would offer an update during its upcoming earnings call. Nike may set the tone for other reports, as like peers, Nike temporarily closed stores, first in China, and more recently in the U.S. and other areas hit by the outbreak. Lululemon, a maker of upscale activewear, earlier this month announced the temporary shutdown of stores in North America and Europe. The company said it would update investors about the impact of the coronavirus outbreak on its business during its earnings call.

Gilead Sciences' (GILD 0.43%) remdesivir is already being used on patients in the heavily hit area of Washington state, and now Trump said a malaria treatment -- which showed promise in small studies in France -- would be made available in the U.S. FDA Commissioner Stephen Hahn emphasized the agency would continue to focus on safety before clearing any product for use.

According to the World Health Organization, there are 41 vaccine candidates being developed by companies and researchers worldwide. Moderna (MRNA 0.44%) announced last week that the first patient was dosed in a phase 1 vaccine trial, and it aims to follow up with a phase 2 study, possibly in a few months. Any positive news from these or other biotech companies working on treatment and prevention may lift their shares, and any news of a successful medicine could inject optimism into the falling markets.

3 Stocks Ripe for a Buyout