Here's what the next few months could look like.

In the early days of the COVID-19 outbreak, the U.K. adopted a novel strategy: "herd immunity." The idea was that, since the case fatality rate (CFR) was apparently acceptably low, U.K. officials would do little to stop the spread of the disease. Instead, the virus would works its way through the populace. Once recovered, the majority of Brits -- the "herd" -- would have immunity to the disease built up in their systems.

But that policy came to a sudden end last week when Prime Minister Boris Johnson announced it would start taking solid steps to enforce social distancing. 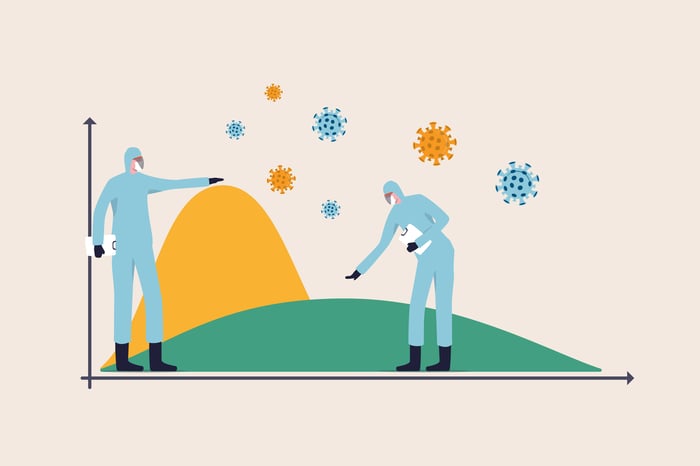 What caused the sudden reversal? A paper by Neil Ferguson and his colleagues at Imperial College in England painted a bleak outlook for the U.K. -- and the United States -- if drastic measures weren't taken.

We'll review the paper from 30,000 feet and cover why one risk expert, who has been warning about COVID-19 since late January, actually thinks there's more reason for optimism.

I'm not going to foray too far into the weeds here. You can read the entire paper by Ferguson and his team here. In essence, the team made a bunch of conservative assumptions based on the most up-to-date data they could get their hands on. This included variables like the incubation period, the infectiousness (R0) of COVID, CFR, and the number of people needing to be hospitalized and entering the ICU.

It also attempted to quantify the effects of five different types of non-pharmaceutical interventions (NPIs). This included:

While the third option might seem like a happy medium, there's an important caveat. The authors indicated that -- sans a vaccine -- this could easily continue for 21 months. That's a scenario that would be hard for any populace to endure -- economically, socially, physically, and psychologically.

A beacon of hope?

On the heels of the Ferguson paper, another team of risk experts state-side came out with a response. The team is led by former trader and best-selling author Nassim Nicholas Taleb and Yaneer Bar-Yam of the New England Complex Systems Institute (NECSI). (Disclosure: I have been volunteering with NECSI since February 2020.) Written along with Chen Shen (also of the NECSI), this paper painted the possibility of a much more hopeful outcome.

This is notable, as Taleb and Bar-Yam could easily be described as alarmist. They put out a paper with Professor Joe Norman on January 26th -- before most of the world had even heard of COVID-19 -- calling for "constraining mobility patterns in the early stages of an outbreak." As such, these aren't necessarily starry-eyed optimists.

Their response argued that Ferguson and his team had been too pessimistic:

Since lockdowns result in exponentially decreasing numbers of cases, a comparatively short amount of time can be sufficient to achieve pathogen extinction, after which relaxing restrictions can be done without resurgence. [emphasis added]

What would this look like? We got an idea this weekend when Bar-Yam penned an Op-Ed for USA Today. It called for an immediate and mandatory lock-down of the United States for five weeks. This would include:

Those are no doubt drastic measures. The trade-off: The costs -- while still unknown precisely -- are more predictable than the "wait-and-see" approach. The upshot, according to Bar-Yam: a signficant reduction in cases, buying time to expand healthcare capacity, and the opportunity for the virus to extinguish itself without new hosts.

The effectiveness of a five-week lockdown will be dramatic -- and also entirely predictable.

Investing in the time of COVID-19

For beginning investors, this is no doubt frightening. Even seasoned investors have never seen anything like this. We are in uncharted territory. At the same time, it's important to remember a few key tenets of solid investing:

If you can stick to just these two basic tenets, you will be a long way toward financial health -- COVID-19 or not. And the money you already have invested should have years -- if not decades -- to recover from losses.