Seeking safety and income in the market crash? Look no further.

As multinationals in multiple industries seek government bailouts just to stay in business, and formerly solid blue chips race to withdraw earnings estimates and tap credit lines as their businesses grind to a halt, beverage manufacturer Keurig Dr Pepper (KDP -0.55%) stands out as one of the rarest of organizations: Its profits are set to rise this year.

Last week, the company told investors that it's affirming its plan to expand revenue by the low to mid single digits in fiscal 2020 and to grow diluted earnings per share by 13% to 15%. Management also held a conference call to discuss business continuity and its supply chains, given the rising demand for some of its products.

Keurig Dr Pepper reassured shareholders even as Coca-Cola (KO 0.33%), another relatively safe buy during this crisis, stated on Friday that it won't be able to meet its own 2020 outlook due to the pandemic's impact on its business.

What allows Keurig Dr Pepper to so confidently project top- and bottom-line growth when even mighty Coca-Cola doesn't have earnings visibility? Part of the answer, as I explained in a news brief last week, is due to a set of characteristics unique among major beverage companies. For instance, only 13% of the manufacturer's revenue is rooted in concentrates (which are sold to affiliates that manufacture syrups used in fountain drinks).

While Coca-Cola doesn't disclose its total concentrate sales, they form a significant part of each geographical segment's revenue. Quarantines, curfews, mandatory business shutdowns, and shelter-in-place orders are translating into a steep plunge in fountain sales and a corresponding decline in demand for concentrates. In its earnings warning on Friday, Coca-Cola specifically noted that it would experience a negative impact from "the direction to refrain from dining at restaurants, the cancellation of major sporting and entertainment events, material reduction in travel, the promotion of social distancing and the adoption of work-from-home policies."

Thus, Keurig Dr Pepper, which derives 44% of its sales from bottled beverages (which end up in grocery and convenience stores) and 38% of sales from Keurig brewing systems and K-Cups, will benefit more directly from the sudden surge in at-home consumption, with manageable exposure to decreased concentrate sales.

The company very likely also has a slight demand edge on Coca-Cola, as well as beverage rivals PepsiCo and Monster Beverage, in that two-fifths of its revenue is coffee-based. It's not difficult to see how a sudden shift to working at home by millions of people will benefit the company's direct and licensed K-Cup coffee sales. 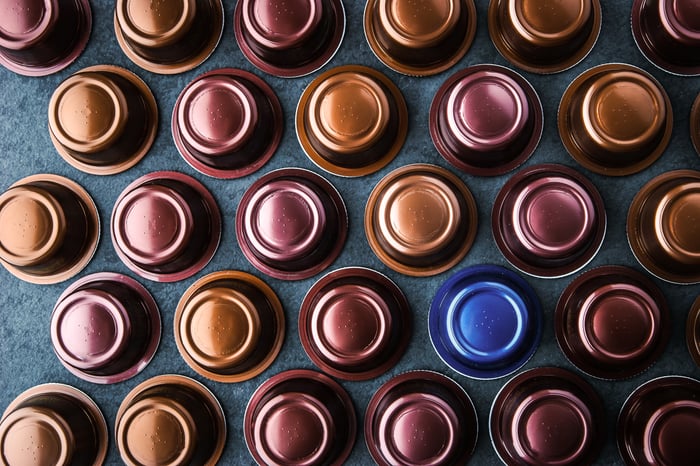 Coffee pods are hot commodities at a time when everyone is working from home. Image source: Getty Images.

Another advantage the consumer staples stalwart enjoys over its competitors is its relative lack of international revenue. While the three competitors I've mentioned above each sport an entrenched global distribution footprint, Keurig Dr Pepper's revenue is concentrated in the U.S. and Canada. Its single international segment, Latin America, makes up less than 5% of total annual sales. The organization will suffer less from global supply-chain disruption due to COVID-19 versus its fellow manufacturers.

Since Keurig Dr Pepper foresees minimal business disruption, it should continue to maintain its extremely healthy operating margin of 21% and net profit margin of 11% this year.

The company's dividend is not at risk. Its payout ratio lands slightly on the high side at 67%, although this should drop to around 60% by year end based on its projected earnings-per-share growth. The KDP symbol currently offers an attractive annualized dividend yield of 2.6%.

As for its balance sheet, thanks to "continued exceptionally strong free cash flow," the company also reaffirmed its intention to continue to pay down the debt financing undertaken to complete the 2018 merger of Dr Pepper Snapple Group and Keurig Green Mountain. Management projects that the organization's leverage ratio will fall somewhere between 3.5 times and 3.8 times by year end, indicating a moderate debt load.

Investors are beginning to notice Keurig Dr Pepper's relative strength during an extremely volatile period in the economy. As of this writing, the S&P 500 index has shed nearly 30% of its value year to date, while Keurig Dr Pepper has retraced just 18% over the same period. The beverage giant now trades at a forward P/E of roughly 17. While this multiple may have positioned the company as a value stock in February, it now equates to a slight premium over the larger market, which has seen its aggregate forward P/E fall all the way to 13.0.

So, a safe consumer goods investment that was underpriced as recently as a few weeks ago can now be considered slightly expensive. But for income investors who don't want to worry about a dividend payout being cut overnight, or the likelihood of dire business consequences due to the coronavirus pandemic, the comfort is well worth a few percentage points of pricing premium.