Please ensure Javascript is enabled for purposes of website accessibility
Log In Help Join The Motley Fool
Free Article Join Over 1 Million Premium Members And Get More In-Depth Stock Guidance and Research
By Danny Vena - Mar 24, 2020 at 7:33AM

While some companies are suffering from the effects of the worldwide pandemic, the e-commerce giant is getting stronger.

The stock market has fallen into its first bear market in more than 11 years, pushed into the abyss by the outbreak of illness caused by the COVID-19 coronavirus. As the panic selling increased, the tendency by investors to sell off both good stocks and bad has created what is perhaps the best opportunity in more than a decade to get high-quality stocks at a significant discount.

One stock that has been punished along with many of its peers is Amazon.com (AMZN 3.60%), yet there are many reasons to believe that not only will the e-commerce giant survive the coronavirus-induced difficulties, but will actually emerge from the downturn an even better and stronger company.

While the selling frenzy that has gripped investors in recent weeks may not be over, that doesn't mean investors should shy away from the current bargains. Let's look at four reasons investors should consider adding Amazon, before Wall Street comes to its senses.

As schools and businesses alike are being shuttered, and coronavirus sweeps across the nation, consumers are becoming more and more leery of leaving their homes. Even if that weren't the case, 17 states have all issued stay-at-home orders, and more will likely follow suit.

This leaves many consumers reaching for their keyboards to pick up many of the essentials, and Amazon is the e-commerce site of choice for more than half the country, leaving it to reap the spoils of the pandemic.

2. A tipping point for grocery sales?

Even as Amazon is the world's largest online retailer, the majority of consumers still get most of their fruits, vegetables, and meats at the local grocery store, preferring to judge the quality and freshness for themselves.

However, with more consumers sheltering at home, the time may have come for online grocery sales to come into their own. Demand has been so high, in fact, that Amazon was forced to temporarily suspend its Prime Pantry grocery delivery service in the face of overwhelming demand. 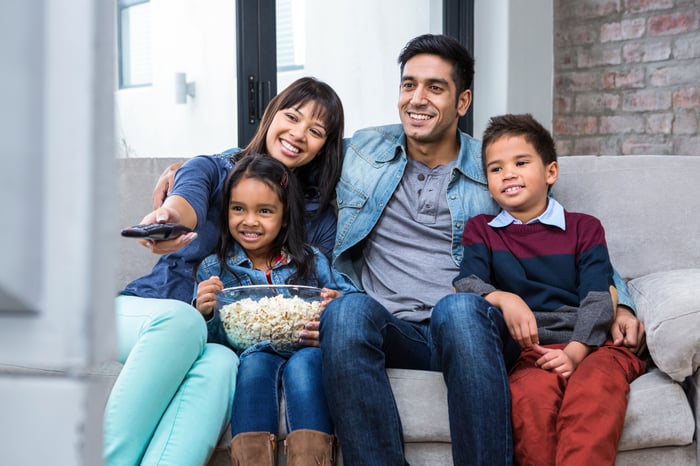 If you have any doubt that there's been a serious uptick in streaming video demand as a growing number of consumers are forced to forego their usual activities, consider this: Thierry Breton, the EU's Internal Market and Services Commissioner, reached out to the heads of the major streaming services, asking them to reduce image quality to help lessen the strain on the infrastructure and reduce internet congestion. Amazon announced that it would reduce bitrate speeds in Europe to "help mitigate any network congestion."

The company could see a further surge in streaming demand. In a recent report, television ratings specialist Nielsen suggested that in times of crisis when people were holed up at home, streaming video use surged. "Staying put in our homes can lead to almost a 60% increase in the amount of content we watch," Nielsen said.

4. Scaling its fulfillment and delivery operations

Earlier this week Amazon announced that it would be hiring as many as 100,000 additional full- and part-time employees to handle the unparalleled demand at its warehouses and fulfillment centers, as well as augmenting its delivery workforce. In addition, the tech giant said it was increasing the pay of existing workers by $2 per hour. Amazon also announced it was suspending the acceptance of "non-essential items" at its warehouses, in lieu of much-needed consumer staples and medical supplies.

These unprecedented measures will no doubt strengthen Amazon's already formidable fulfillment and delivery business, allowing the company to scale its operations even further. 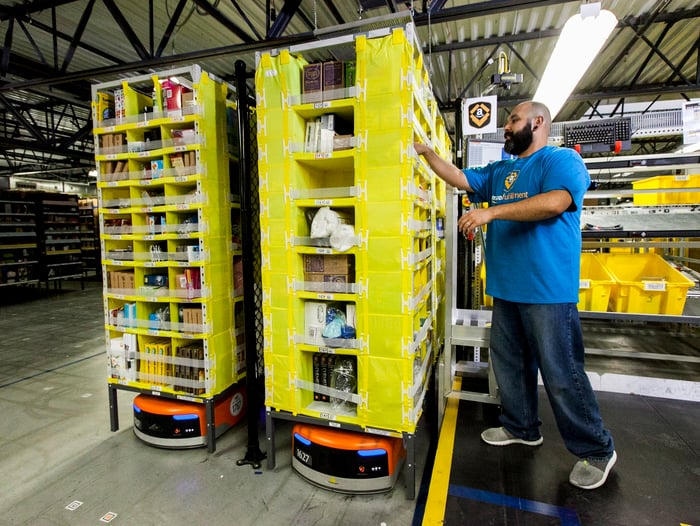 Amazon is already the leader in its field when it comes to e-commerce and cloud computing via Amazon Web Services (AWS), not to mention the Alexa-powered Echo smart speakers -- a category it created. The company also holds commanding positions in streaming video and digital advertising, and that's just to name a few.

Add in the company's rock-solid balance sheet -- with more than $55 billion in cash and marketable securities, and just $23 billion in long-term debt -- and you have a host of reasons to buy Amazon before the market comes to its senses.