Please ensure Javascript is enabled for purposes of website accessibility
Log In Help Join The Motley Fool
Free Article Join Over 1 Million Premium Members And Get More In-Depth Stock Guidance and Research
By Brent Nyitray, CFA - Mar 24, 2020 at 6:00AM

The recent market volatility has wreaked havoc on real estate investments trusts (REITs) that specialize in mortgages. As financial stresses have increased, these businesses have seen prices of their holdings decline relative to the Treasury benchmark, and they've suffered falling book values. How is Annaly Capital Management (NLY 2.88%) holding up?

Annaly Capital is an agency mortgage REIT that invests primarily in mortgage-backed securities (MBS) guaranteed by the U.S. government. Annaly does have other investments in commercial mortgages and investments that are not guaranteed by the government, but 88% of its assets are in agency MBSes, which have massively underperformed Treasuries since the beginning of the coronavirus (COVID-19) pandemic.

An update, a dividend, and a new CEO

On March 16, Annaly declared a $0.25 dividend per share, same as last quarter, and held a conference call to update investors and analysts on what the recent volatility has meant for the company. So far, the volatility in the markets have yet to force Annaly to cut the dividend. The underlying agency mortgage-backed securities are "money good" -- in other words, they will be insensitive to a major recession because the government will ensure they get paid. If we do get a major banking crisis, then all bets are off because Annaly could be forced to liquidate its portfolio in a weak market.

The company also promoted David Finkelstein from chief investment officer to CEO. Finkelstein was senior advisor to the New York Federal Reserve and was an MBS trader at Citigroup and Barclays. 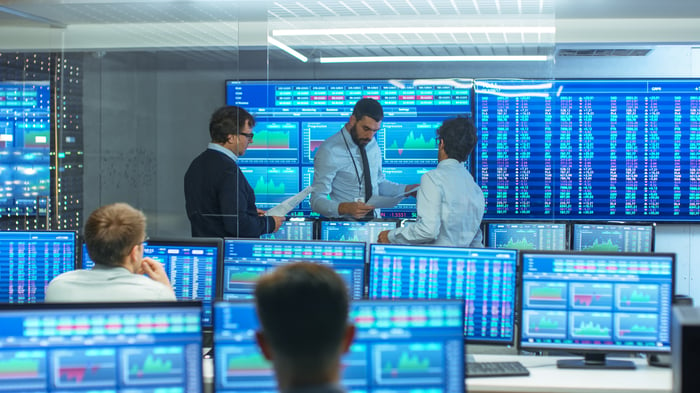 State of the markets

Since the epidemic first started, we have seen increased stress in the financial system. Mortgage spreads, which are the difference between mortgage yields and Treasury yields, have increased (or "widened," in industry vernacular). This caused Annaly's book value to fall. Over the past couple weeks, the Fed took dramatic action, cutting the Fed Funds rate to zero, injecting liquidity and pledging to buy up to $200 billion in mortgage backed securities over the next several months. These moves supported the MBS market early in the week, but conditions deteriorated as the week went on. The Fed increased and accelerated its purchases late in the week.

On March 18, the entire mortgage REIT sector was sold off on fears that banks were pulling their repo lines. Essentially, the way a REIT like Annaly leverages its portfolio is via the repo market, which is essentially a secured loan. Annaly buys mortgage backed securities, and then uses those securities as collateral for a loan. If banks call in their repo lines, that means the mortgage REITs will have to sell mortgage-backed securities to raise capital to pay the loans. As of Dec. 31, Annaly's average maturity on its repo lines was 65 days and 35% of Annaly's lines had maturities under 30 days.

On the conference call, Finkelstein directly addressed the elephant in the room: MBS financing. He said, "While repo has exhibited some premium for term contracts given the uncertainty with respect to policy, financing markets for agency have remained liquid, which should be expected given the Fed's extreme focus and intervention in short-term funding markets [emphasis mine]." This means that Annaly is able to roll over its maturing repo lines. As long as the company can roll over its lines, it can ride out the storm.

Take a look at the chart of Annaly's price-to-book ratio over the past 10 years. We are at all-time lows. The last time Annaly traded at a big discount to book was when the Fed started raising interest rates in late 2015. 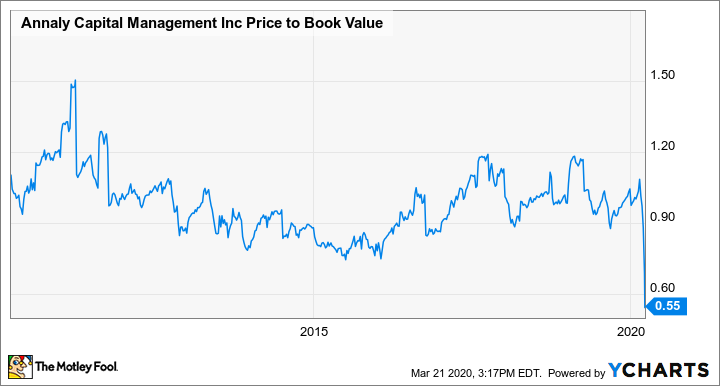 In its annual report, Annaly discloses the effect of interest rate risk and mortgage spreads. In terms of portfolio risk, Annaly estimates that if interest rates fall 75 basis points -- that is, 0.75 percentage points -- the portfolio will slightly increase in value. Net interest income will fall, but the book value should be unaffected. Annaly's models forecasted that if mortgage spreads increase by 25 basis points, book value should drop by 10%. On Wednesday, March 9, mortgage spreads had increased about 32 basis points from the end of 2019, and book value was down about 11%. Note that mortgage spreads have continued to widen, and stand 77 basis points higher than they were at the end of 2019. Some widening has been due to an increase in prepayment speed assumptions, however the lion's share is due to technical factors -- inadequate demand and a torrent of selling coming from a wave of mortgage refinancings.

Annaly Capital has ample liquidity, with $6 billion in unencumbered assets. Leverage is low -- 7 to 1, as of Dec. 31. The agency MBS book has been leveraged 9 to 1 in the past. Finkelstein said that agency mortgage-backed securities are the cheapest they have been since the crisis. With current implied yields and borrowing rates, these securities can generate a mid-to-high-teens return on equity. Going forward, Annaly has dry powder to invest opportunistically in the market.

In the midst of everything that is going in the financial markets, with stock market investors throwing away good and bad, with the CBOE Volatility Index, or VIX, hitting a record this past week, what did Annaly do? It held a conference call with investors and analysts to update them on the markets and the company's financial situation. It also declared its normal $0.25 dividend. This stock may be priced for disaster, but I think the Fed took the right moves early enough to prevent it.