Please ensure Javascript is enabled for purposes of website accessibility
Log In Help Join The Motley Fool
Free Article Join Over 1 Million Premium Members And Get More In-Depth Stock Guidance and Research
By Taylor Carmichael - Mar 24, 2020 at 10:27AM

After the biotech company needed a 1-for-20 reverse stock split last year to avoid being delisted, Novavax has hit a home run with NanoFlu.

On Tuesday, vaccine-specialist Novavax (NVAX 4.16%) reported positive news from the phase 3 trial for its flu vaccine, NanoFlu: The treatment met both the primary and secondary endpoints of the study. The stock was up 36% in early trading.

"These strong Phase 3 results align with and validate our previous clinical trials, in which NanoFlu showed higher HAI antibody responses than the leading flu vaccine for older adults," said CEO Stanley Erck. "We expect that both Fast Track designation and the accelerated approval pathway from the FDA will help Novavax bring NanoFlu to market as quickly as possible to address the serious public health threat of influenza." 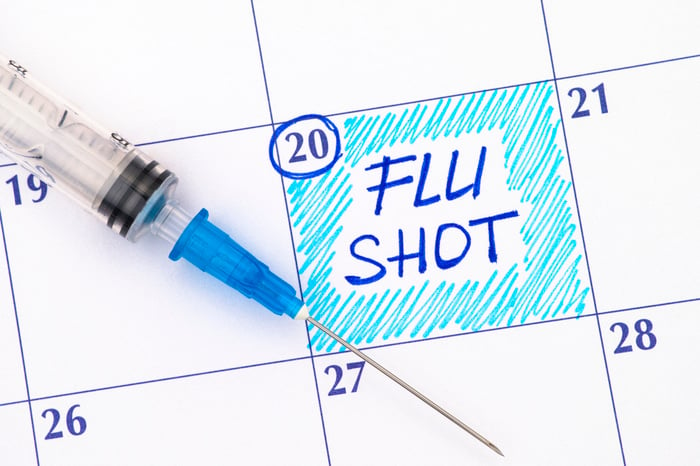 The phase 3 trial evaluated the immunogenicity and safety of NanoFlu compared to Fluzone Quadrivalent, the vaccine sold by market-leader Sanofi (SNY -1.53%). NanoFlu demonstrated significantly higher geometric mean titers (GMT) and seroconversion rates (SCR) across all four flu strains included in the vaccine. In the trial, NanoFlu had 24% to 66% higher GMT responses than Fluzone Quadrivalent, and scored 11.4 to 20.4 percentage points higher for SCR.

NanoFlu was also tested in four different flu strains not included in the vaccine, but circulating this year. Again the drug demonstrated significantly higher GMT and SCR scores than Fluzone Quadrivalent in all four strains.

In an interview with the Washington Business Journal, Dr. Gregory Glenn, president of research and development for Novavax, said, "This is such a critical milestone to have positive pivotal trial data like this. It's transformational. Biotech companies, at the end of the day, only survive if they deliver success, if they deliver a clear pathway to licensure. It's a strange business, but our coinage really is clinical data -- and this is gold."