Please ensure Javascript is enabled for purposes of website accessibility
Log In Help Join The Motley Fool
Free Article Join Over 1 Million Premium Members And Get More In-Depth Stock Guidance and Research
By Billy Duberstein - Mar 25, 2020 at 10:00AM

Even though the market has plunged to bear market territory at unprecedented speed over the past month, investors are still bidding certain stocks up to questionable valuation levels. These stocks are usually either in the healthcare and biotech fields, which investors think may benefit from future COVID-19 treatments, or they're software companies that investors think may benefit from the stay-at-home economy and teleworking.

The poster child for the latter is Zoom Video Communications (ZM -0.76%). The newly public teleworking software company has soared 135% year to date. 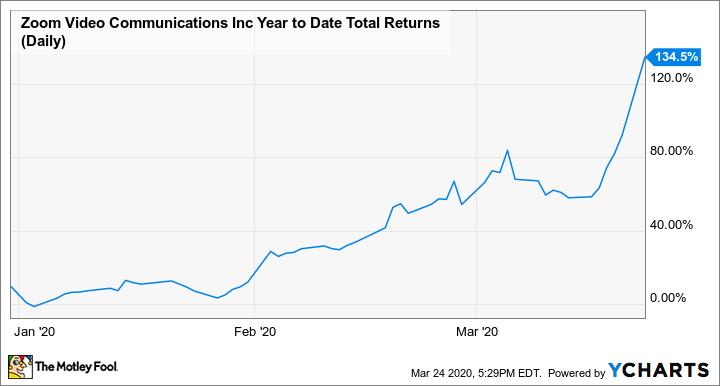 However, if you're thinking of chasing the stock here, that's a very dangerous proposition. The recent surge has brought Zoom Video to a valuation that is insanely expensive, not only by the standards of regular stocks, but also the more expensive software-as-a-service chort. 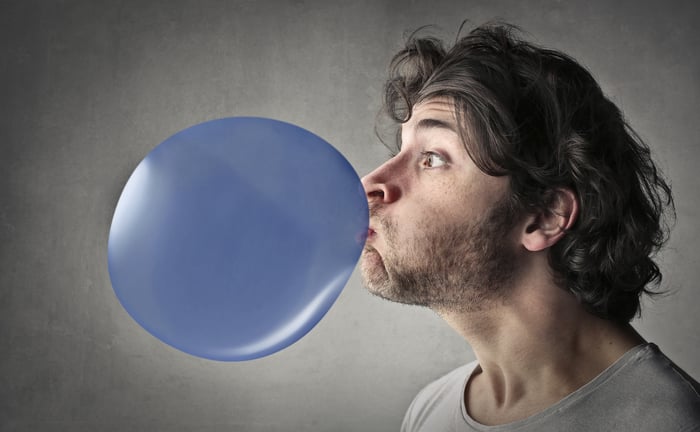 Even by SaaS standards...

Even before the recent surge, Zoom hadn't exactly been cheap. As a cloud-based video conferencing stock, Zoom is part of a new group of companies that have been crowned leaders of the modern enterprise software industry. These companies benefit from both high growth and high customer stickiness, even in difficult economic times. Aware of this, technology investors have bid these companies up to very high levels compared with the rest of the market.

Yet even among these companies, Zoom stands out for its astronomical valuation:

While Zoom is definitely posting some terrific growth numbers, it is more than double the valuation of the most expensive peer in Okta, and more than triple the valuation of some of other high-growth, high-quality software peers -- and these companies aren't exactly cheap in and of themselves.

Could Zoom actually grow into this valuation?

Obviously, many in the market think that the recent teleworking trend can accelerate Zoom's growth, even from these very high levels. However, it should be known that Zoom is already a leader in its industry. It's been around since 2011 and already has a strong international presence. The law of larger numbers may make accelerating growth difficult.

While it's also no doubt an impressive company with impressive management, the virtual meeting industry isn't winner-take-all, either. Zoom is up against some well-heeled competitors such as Cisco (CSCO 0.57%) and Logmein (LOGM). In addition, its China business is up against strong local competition, making it difficult to penetrate that high-growth market. Recently, Chinese internet giant Tencent Holdings (TCEHY -0.93%) said its new Tencent Meeting business software had already grown to 10 million users after just being launched in December.

It's likely that many laypeople have begun using the free version of Zoom for the first time this month with their friends -- people like my very non-tech-savvy parents, for example, who just discovered the software. That may have spurred lots of retail investors to buy the stock because people they know are using it.

However, while there may be much more incremental usage, it may not exactly lead to more revenue or profits, at least in the near term. On the March 5 conference call with analysts, CFO Kelly Steckelber said:

As a reminder, we have definitely seen an uptick in usage. But a lot of that is on the free side. So it's very early to tell whether or not that's going to convert long term into paying customers. As we mentioned, we are seeing impact and have continued to build capacity to ensure that we can support this increased usage. So we are seeing impact on our gross margins, which is why we're guiding you toward the lower end of our range for next year.

In other words, not only is Zoom not profiting very much from the incremental usage on the free tier, but the increased usage may actually hurt near-term profits as the company invests in excess capacity.

This is of course the right thing to do in a time of crisis, and management is doing the right thing to make sure users begin to adopt the service without roadblocks; however, for shareholders, it's really premature to think that the recent boom in free usage will pay off in a significant way. And it's certainly not a reason to be paying 63 times sales for the stock.

Zoom is no doubt a terrific company with excellent management, but for those looking to jump into the stock, you should beware of its nosebleed sticker price. Good long-term investing means investing in great companies and managers at reasonable prices. And 63 times sales isn't reasonable by any stretch of the imagination, making Zoom stock incredibly risky here.