The plasma of those who have recovered contains antibodies to the novel coronavirus, which could help other patients fight it off.

On Tuesday, the Food and Drug Administration said it's facilitating access to the blood plasma of patients who have recovered from COVID-19. Because those patients have fought off disease, their plasma should contain antibodies to SARS-CoV-2, which causes it.

The agency outlined eligibility rules for donors, including that they should have been free of symptoms for at least 14 days and test negative for COVID-19. The FDA would also like their plasma to be tested for neutralizing antibodies to the virus, but the agency realized that may not always be possible.

The agency is also approving emergency Investigational New Drug (IND) Applications for individual patients. It's shooting for getting those emergency INDs through the process in 4 to 8 hours via email, and is also offering verbal authorizations over the phone if doctors need a response more quickly.

Typically INDs are cleared in 30 days for entire clinical trials and require extensive pre-clinical testing. But we're in an emergency situation, and plasma-based drugs have been found effective in treating other diseases, including primary immunodeficiency, where patients have a weakened immune system.

However, as the agency stated explicitly in a press release: "Although promising, convalescent plasma has not been shown to be effective in every disease studied. It is therefore important to determine through clinical trials, before routinely administering convalescent plasma to patients with COVID-19, that it is safe and effective to do so." 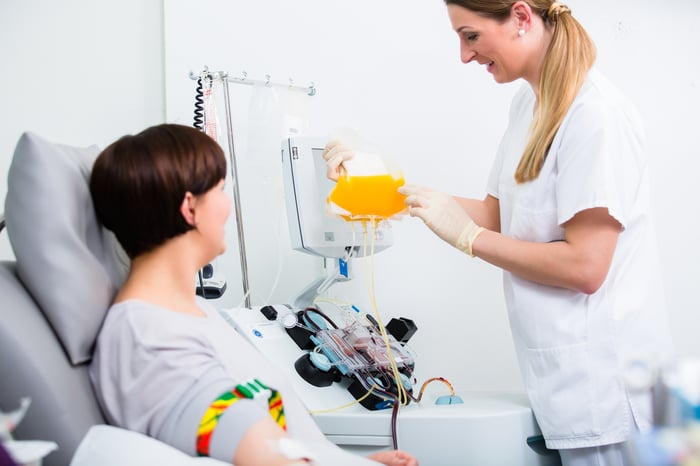 Earlier this month, Takeda Pharmaceuticals (TAK -0.25%) announced plans to develop a plasma-derived therapy, TAK-888, from patients who have recovered from the disease. Takeda already sells other plasma-derived therapies that are manufactured at the Georgia facility where TAK-888 will be produced.

Emergent BioSolutions (EBS 0.21%) is also developing plasma-based treatments for COVID-19, including COVID-HIG, which will be derived from recovered patients, and COVID-EIG , made from plasma taken from horses that were given the virus. Emergent BioSolutions, which specializes in fighting bioterrorism and emergent diseases, sells human-plasma products for smallpox vaccine complications and anthrax, as well as a horse-derived plasma treatment for botulism.