Please ensure Javascript is enabled for purposes of website accessibility
Log In Help Join The Motley Fool
Free Article Join Over 1 Million Premium Members And Get More In-Depth Stock Guidance and Research
By Howard Smith - Mar 25, 2020 at 8:17AM

A look at how much the risk level has come down, with the stock price dropping 57% from its recent high.

Earlier this year, solar energy technology company Enphase Energy (ENPH -3.15%) was a favorite with momentum investors. After the company announced its 2019 fourth-quarter earnings on Feb. 18,  shares jumped 43%, capping a three-month increase of over 200%.

Now, however, with the bear market initiated by the COVID-19 pandemic, the stock has lost more than half its value from those recent highs. Price moves of that magnitude significantly change the risk level of any investment. But a look at the business itself should be the basis for the decision of whether to invest. 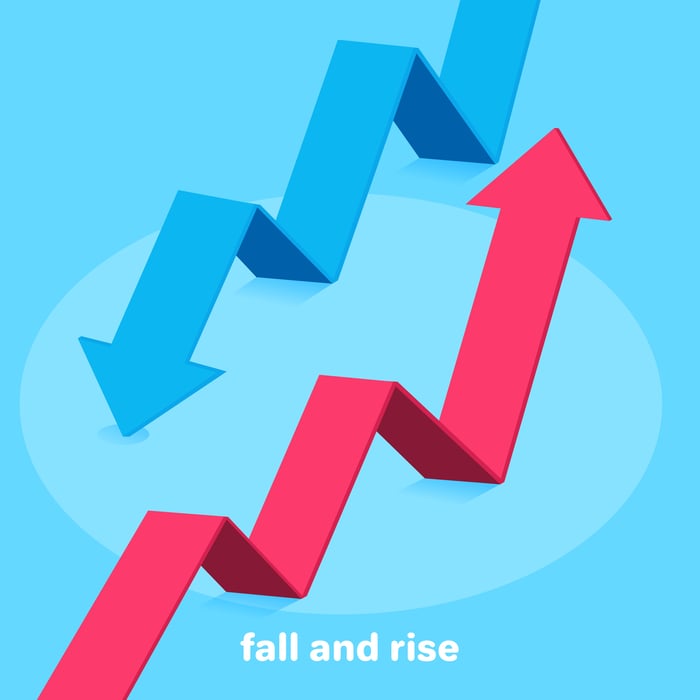 A focus of the company throughout 2019 was to ramp up production to meet the demand for its products. The company's solar microinverters, which convert energy at the solar panel, have been in high demand as part of a total energy solution including storage and software and network technologies.

In the 2018 fourth quarter, Enphase shipped 820,000 microinverters. One year later, as it ramped up production to meet demand for its latest version, IQ 7, it shipped over 2.1 million units. Over that timeframe, it's stock price increased 10-fold. The following table shows the rising output, and (importantly for investors) rising margins that have come with the growing sales.

Enphase has expanded its offerings with its Ensemble energy management technology, which now includes the new Encharge battery storage system. Pre-orders for Encharge, which are to begin shipping this month, have been strong, according to the company.

The risk level certainly rose with the ascension of the stock price, as well as a rising level of competition. Israeli firm SolarEdge Technologies (SEDG -5.83%) also offers microinverter solutions, and backup-generator maker Generac Holdings (GNRC -1.11%) has also now entered into the solar storage business in addition to other current players such as electrical component and battery manufacturers.

But the biggest risk for the company may be from economies around the world reeling amid the fight against the COVID-19 pandemic. Enphase has estimated the serviceable addressable market (SAM) for its products going from $3.3 billion in 2019 to $12.5 billion in 2022. A global recession would likely affect those estimates. With the majority of that market being residential solar and storage, along with "small commercial solar," economic hardship could delay or eliminate some growth.

Being an asset-light business with a solid balance sheet should help the company even if there is a business slowdown. If an investor still believes there will be growth in solar technology demand, even at a lower rate than currently anticipated, the valuation looks compelling.

Risk associated with the stock price itself has changed drastically with recent market turmoil. With the anticipation of growing sales in 2019, the P/E ratio for Enphase reached the unsustainable level of 400. But as the sales came to fruition, and with the stock price now retreating, the business looks to be a good value. 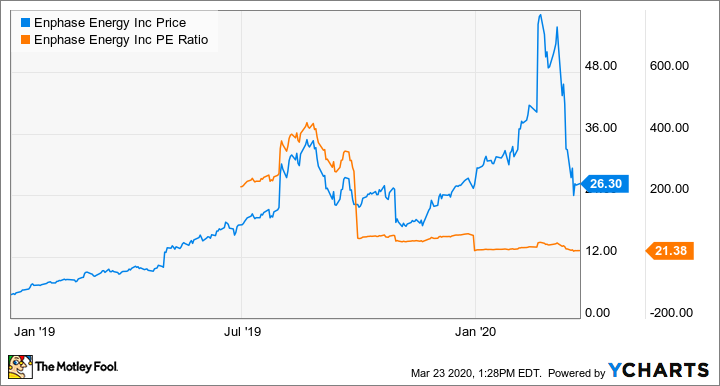 Enphase has announced plans for its next-generation inverter solution, IQ 8, as well as expansions for its Ensemble offering into India. And a partnership with German solar roof manufacturer Creaton in Europe, and U.S. roofing and solar company PetersenDean promise more growth.

Strong cash flow from operations of $102.3 million in the most recent quarter has resulted in a level of cash and equivalents of $296.1 million on the balance sheet, compared with debt of $105.5 million.

While Enphase Energy has been an expensive momentum growth stock over the past year, the recent significant drop in share price has brought it to a realistic risk/reward balance. The underlying business strength needs to continue. But assuming the current crisis subsides and you believe in the continued growing interest in the residential and commercial solar story, Enphase has reached a level where reward should outweigh the risk.

The Surprising Pick for Investors Who Aren't Into Energy Stocks