The market seems to have misinterpreted its latest news.

The big-box chain gave investors a clear-eyed look at where the business stands as the coronavirus outbreak sweeps the country, and investors didn't take the news particularly well. The company revealed that it was withdrawing guidance and suspending share buybacks, and the stock finished the day down 9.5% even as the broad market gained. Target also said it would incur more than $300 million in incremental operating expenses this quarter due to increased wages, higher supply-chain costs, and additional store cleaning needs.

Still, long-term investors shouldn't be scared away by the report -- there's plenty of good news here. Let's take a look at a few key items. 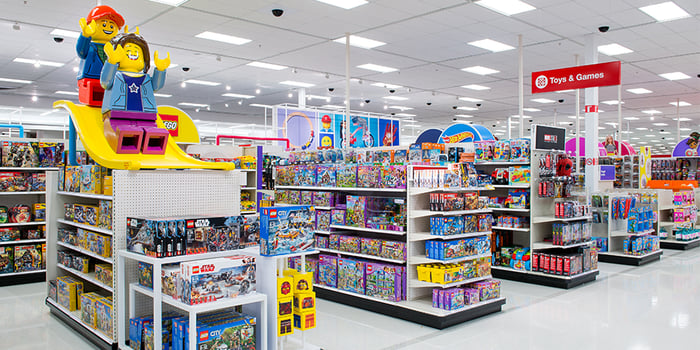 Through March so far, Target's comparable sales are up more than 20% thanks to unusually strong customer traffic and demand for food and essentials like medicine and cleaning supplies. The company has also seen a boost in products related to in-home activities, such as home office and entertainment needs. Sales of apparel and accessories, on the other hand, have fallen sharply, and are down more than 20% compared to a more-than-50% jump in food and beverage. That bifurcation shows that consumers are focusing on stocking up on consumer staples while they prepare to stay at home during the COVID-19 outbreak, and foregoing purchase of more discretionary items like clothes.

Target's gross profit has been better than expected so far in the quarter, which started at the beginning of February, though it said that could change for the remainder of the period as it loses sales in higher-margin apparel.

Overall, the numbers portray a company that is adapting well to a difficult situation and coming through for its customers, who need its merchandise now more than ever. As a result of both increased demand and the company's effective execution, sales are surging.

According to the stakeholder value theory of management, companies are most successful when they value the needs of a range of stakeholders, including employees, customers, and shareholders, rather than just aiming to boost the stock price.

Target seems to be putting that theory into practice right now during a critical time. Not all retailers even offer benefits like paid sick leave, but Target has given a $2/hour raise to hourly employees in its store and distribution centers through May 2, a move that some of its peers, like Walmart, have followed. The retailer also said it would give paid leave to employees who are most vulnerable to the coronavirus, and it plans hand out bonuses to team members and team leads as a reward for the dedication and hard work during the crisis.

The company has also adapted its business to changing demands, putting remodeling and new store initiatives on pause to meet the urgent needs of its customers both in-store and through its digital channel. CEO Brian Cornell said, "We are prioritizing the work that's in front of us to support our team, store operations and supply chain as families across the country rely on Target for everything they need in this challenging environment. I want to thank our entire team for their efforts, which have been nothing short of heroic." He also added, "Ensuring we can take care of our team and deliver for the millions of guests who are counting on us remains our top priority."

Taking care of employees and customers should yield benefits in increased loyalty down the road, even when the crisis is over.

3. It has an advantage over its rivals

Target is unique among retailers. Few chains have the kind of product diversification that it does, selling food and beverage, apparel, electronics, toys, home goods, and household products. Sales are spread roughly evenly over all five of its business segments, meaning it draws in customers with a wide range of needs. Though Walmart also sells a similar range of products, that retailer derives more than half of its sales from groceries, and is more focused on a lower-income, rural demographic, while Target's customer base is more balanced across the country, geographically and demographically.

What's especially important now is that Target locations can stay open at a time when many of its rivals' stores, outside of food and beverage, are closed. Because Target sells food and other essentials, its stores can remain open during the coronavirus crisis, while those of competitors like Bed Bath and Beyond, TJ Maxx, and Gap are all temporarily shuttered. That gives Target a huge advantage over those less-fortunate retailers -- both now, as it continues turning a profit while those chains have to absorb fixed costs, and after the crisis, as the company will be in a much better financial position when business returns to normal. A number of apparel retailers, in particular, may be pushed into bankruptcy by the pandemic.

Target was one of the best-performing retailers before the coronavirus hit, and will likely emerge from the crisis in a much stronger position than many of its rivals, with increased customer and employee loyalty, and pent-up demand for categories where it excels like apparel and home goods.

Investors shouldn't be fooled by Wednesday's sell-off, or the news that operating costs may jump during the pandemic. Target is doing the right thing and investing in its future. Down 22% since the crisis began, nearly as much as the S&P 500, Target looks like a buy today.