Please ensure Javascript is enabled for purposes of website accessibility
Log In Help Join The Motley Fool
Free Article Join Over 1 Million Premium Members And Get More In-Depth Stock Guidance and Research
By Reuben Gregg Brewer - Mar 27, 2020 at 7:16AM

A market downturn is a great time to pick up dividend stocks like these while they are on sale.

The current bear market took shape so quickly and dramatically that investors' heads have been left spinning. Before you let fear get the best of you, however, step back and take a deep breath. Dislocations like this can open up investing opportunities, as Wall Street has a bad habit of tossing the baby out with the bathwater. That looks like what's taking place with industry giants Chevron (CVX 1.65%), Realty Income (O 0.40%), and Duke Energy (DUK -0.52%). Here's a primer on why you might love these three high-yield stocks despite the turmoil in the market.

Oil drillers are facing major headwinds today because of low commodity prices. But there's a big difference between a tiny onshore U.S. oil driller with weak finances and a diversified global energy giant like Chevron. In fact, the company just came out and announced plans to cut its capital spending by 20% to preserve its financial strength and protect its dividend. That's par for the course here, noting that Chevron has increased its dividend annually for 32 consecutive years. 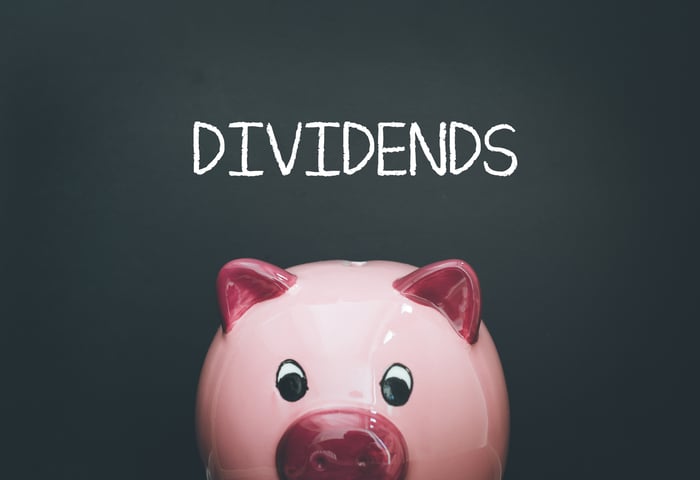 In other words, despite the oil downturn, Chevron's roughly 9% yield looks increasingly secure. Note, too, that the oil giant's financial debt to equity ratio is an industry-leading 0.12 times. Its balance sheet is built to handle the inevitable downturns of the cyclical industry in which it operates. In fact, it had already been working with one of the most conservative investment plans within its peer group before the downturn. So the current pullback on the spending front puts it in an even better position relative to peers to weather the oil industry gale, while continuing to reward investors with a growing dividend over time.

If you can look past the dire headlines today, you will see that oil is still an important global commodity. And giant, diversified, financially conservative Chevron is a good way to play the space for those with a contrarian bent.

Realty Income is one of the largest real estate investment trusts (REITs) in the net lease space. That means it owns single-tenant properties where the lessee is responsible for most of the costs of the building. It's a fairly low-risk business model, and Realty Income is generally considered one of the best run REITs in the space. That's driven by management's conservative use of leverage, impressive historical portfolio growth, and its long-standing commitment to returning value to shareholders via a growing monthly dividend payment. The shares are usually priced for perfection. However, the economic shutdown caused by COVID-19 has changed that -- Realty's shares have dropped a massive 38% or so in a very short period of time. That's pushed the yield up near its highest levels over the past 10 years.

It wouldn't be fair to say that Realty Income is cheap today, but it does look more reasonably priced than it has in a very long time. And it is hard to complain about a 6% yield that has been increased every year for 27 years.

That said, you need to understand why there's so much pessimism today before you jump aboard this industry bellwether. Roughly 80% of Realty Income's portfolio is tied to the retail sector. With stores across the United States shut down because of the coronavirus, investors are worried that Realty's tenants won't pay their rent. That's probably going to be an issue over the near term, but over the long term, things will eventually bounce back. Which means Realty Income's tenants will again open their doors and pay rent in a timely fashion. Meanwhile, Realty's tenants usually sign long-term leases, which means there's a fair amount of continuity in the portfolio from year to year. A near-term hit from COVID-19 shutdowns isn't likely to derail this REIT's business for long. 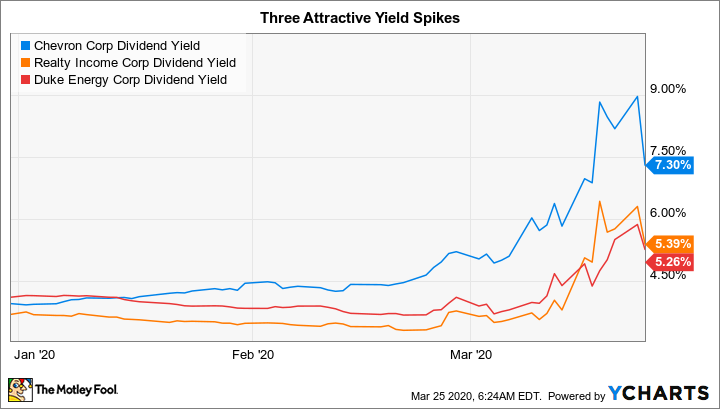 If you can look past the fear today, Realty Income is one the largest and best run players in the net lease space. It's worth a deep dive for dividend investors who have shied away from the name because Wall Street has historically awarded it a premium price.

3. Something a little boring

So far we've looked at two companies that are in the center of the Wall Street storm. How about one that's a little less exciting? What's interesting is that, despite Duke Energy's very stable business, its stock has been trashed along with everything else. The shares are down roughly 30% from their highs this year. The yield is a compelling 5.8%.

Here's what's most interesting about Duke, though: It's an electric and natural gas utility. These are necessity items that people keep paying for even during tough times. And it basically has government-granted monopolies in the markets it serves, so competition isn't really a threat to its business. Moreover, a key piece of that monopoly is that it has to get the rates it charges approved by regulators. While that limits growth potential, it also means the company's pricing dynamics operate outside of the normal economic system. This downturn might hamper demand and earnings in the near term as businesses and consumers pull back, but it shouldn't have much, if any, long-term impact on Duke's monopoly driven business.

Further, Duke's $56 billion capital spending plan between 2020 and 2024 should continue apace despite what's happening in the market. That, in turn, should keep regulators happy and allow Duke to increase earnings at an annualized rate of 4% to 6% through 2024. Dividends, meanwhile, should inch up roughly in line with earnings growth. Duke is not exciting, but in times like these, boring can be beautiful!

The market downturn has opened up a whole slew of opportunities for investors willing to act while others take shelter. Chevron and Realty Income are both strong, well-run companies dealing with very real storms today. But they are among the best names in their respective industries, and they don't go on sale like this very often. If you can think long-term, you should take a closer look. Duke, meanwhile, is surprisingly boring in comparison, but it too has been hammered by the market's decline. This is likely to be a good opportunity for dividend investors who prefer to play it safe.